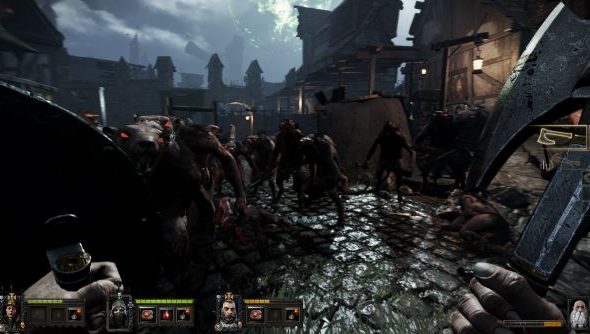 Another character trailer has dropped for Warhammer: End Times – Vermintide, the Left 4 Dead-ish anti-Skaven first-person shooter/meleer coming from Fatshark on October 23rd. This one focuses on Bardin Goreksson, a dwarf ranger from the Grey Mountains who, by all accounts, is a bit of an arsehole. Brash, no-nonsense and loud, he spends about as much time accidentally offending his comrades as he does implanting axes into the skulls of foolish ratmen.

In for some co-op? Here’s our picks for the best games to play with your friends.

Nice chap, don’t get on his bad side – that’s what I’m taking away from this.

Storyline wise, Bardin has ended up with his rat-killing companions as he is on a quest to understand a secret map he discovered in a long-abandoned dwarven mine. It’s written in an ancient version of his people’s language which is untranslatable without a certain book that happens to be in the now Skaven-overrun city. Plus, at least if the above is anything to go by, he really quite enjoys the odd bit of murder.

On the gameplay front, he’s got a wide variety of axes for executing precise limb and head removals. If a blunter approach is needed, he has equally as many hammers, and a shield which is just as good at messing up noses as it is at protecting his. He’s also in possesion of what can only really be described as a Warhammer shotgun, named the Grudge-Raker, for close-range mass-scatterings.

As the fourth character to get a dedicated trailer, only one remains. The Bright Wizard will receive hers next week, first here on PCGamesN. There will then only be a week to go until Vermintide is out and chewing off all our faces. Be sure to check the official site for more info on ol’ Bardin and the rest of the heroes.