Warhammer Underworlds: Online is a digital facsimile of the well-received tabletop game, and as soon as I understood that’s what it was I was unsure about it. It’s not that direct videogame translations of board games can’t work – there’s a long list of those that do – but that things which are funny when they happen in a room with a mate are often not when sitting at a desk by yourself.

I get the argument. A game is defined by its rules, and good rules make a good game regardless of the medium, right? I disagree: sharing a game in person changes the experience in a way which is abstract but essential, and raises its own practical considerations, too. Good board game designers consider both of these things when writing rules. And the ability to compute rules gives videogames an equally essential advantage that their designers, too, should and do utilise.

After a few hours in Warhammer Underworlds: Online, it most obviously needs a lot of work on its tutorials and presentation – many animations, music, sound effects and so on are all either missing or, hopefully, not finalised – but given that it’s very much still in development, let’s focus on the rules. I can see why it’d be a great board game, but I’m not sold on the digital version.

Here’s the basics: you pick a warband and order its fighters around a board of hexes. Your goal is to earn more ‘glory’ than the opposing warband, which does involve killing them (one point of glory per kill), but there’s much more glory to be had by satisfying objectives, which are one of the game’s three types of cards. 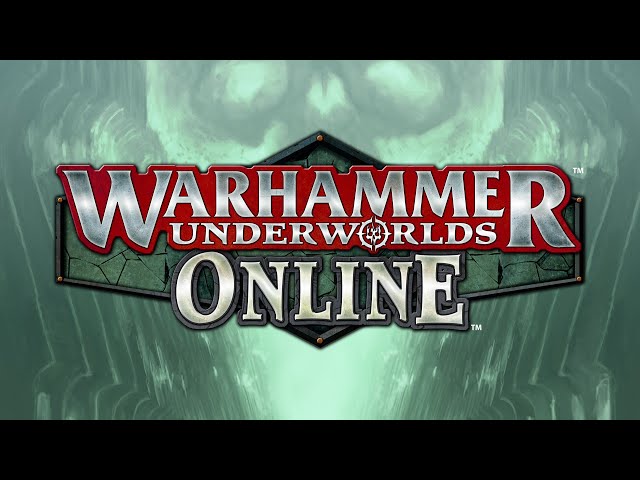 The other cards are powers, divided into gambits and upgrades. Gambits are tactical ploys that allow you to directly affect the board by, say, swapping two fighters’ positions, or granting bonus damage to the first attack in the next turn. Upgrades cost glory to play, but buff your fighters for the rest of the game, perhaps with a new weapon, more wounds (health), or another damage die.

These cards combine with the intrinsic abilities of your fighters to define your warband’s playstyle. Ideally, you’d want each to have a broad personality, which players could more sharply define into one of several clear strategies when building their decks. Of the four warbands in Underworlds right now, The Sepulchral Guard (a bunch of skeletal undead) do this best.

With seven fighters they’re by far the most numerous warband. They move slowly and suck ass in combat, but their leader, The Warden, has two key abilities, which players can enhance through gambit cards: he can return slain allies to the field, or move two allies instead of one in a single ‘activation’. 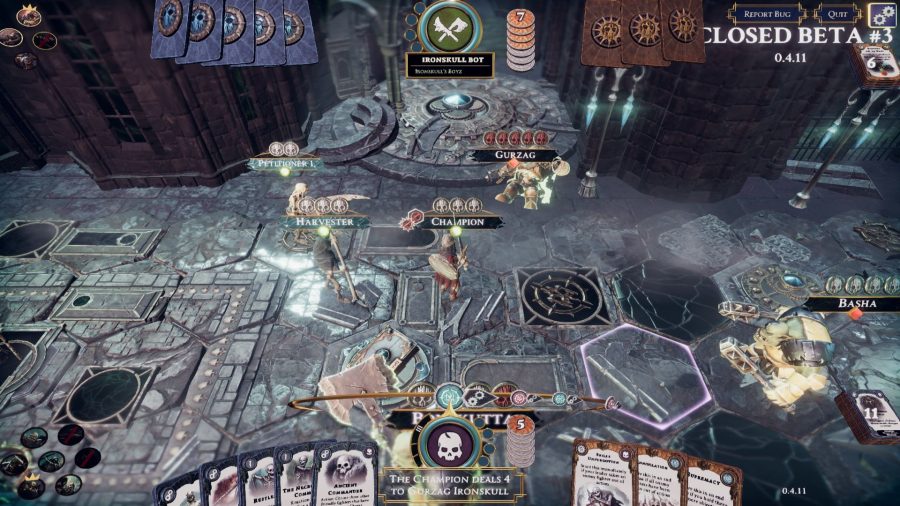 The aesthetic is clear: an overwhelming horde of undead, spurred endlessly on by a single puppetmaster. Classic stuff, the beating heart of many a horror B-movie, from which several strategies could follow: you could use your numbers to contest objective markers on the battlefield, or tackle enemies who’d mix your stew one-on-one by either outmanoeuvring them or crowding them – both attacking and defending is more effective when you have allies nearby, which makes positioning important.

In the event, though, I didn’t really get the chance to pull any of these off. One game is split into three rounds of four activations each, so in an entire game you only get 12 chances to act. Even considering The Warden’s ability to move – not attack with – two allies at once, which is clearly designed to address this precise problem, I found I didn’t have a lot of headroom in the action economy to execute my plan. On the tabletop, this cap on game length is good when you and a friend need to manage your evening commitments. It makes less sense in a videogame. 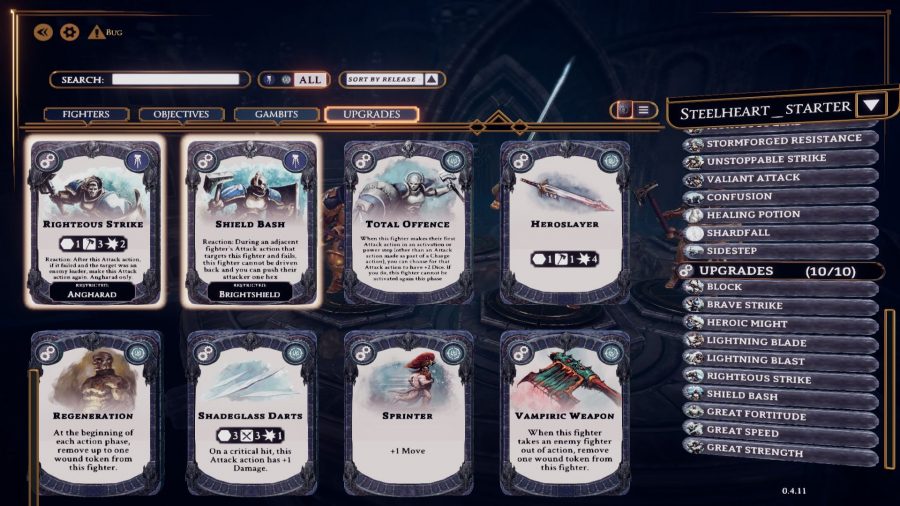 I nonetheless cruised to an easy victory against a bot (matchmaking errors prevented me from playing a human) commanding Ironskull’s Boyz, an Orcish warband, but this was thanks more to shallow rules and the influence of luck than to good play on my part. I don’t believe the win would’ve left me feeling quite so lukewarm if I’d been joking about it around a table with a friend.

I wonder if the problem is that Underworlds is a good board game, but not a good videogame

Here’s how luck affects the outcome of games. The tutorial informs me that ‘smash’ icons on the attack dice indicate successes, and that we’re looking to roll more of these than successes on the target’s defence dice.

All well and good. Obviously I immediately wondered what the odds were, and was a little annoyed when I found no indication within the game and had to go to Reddit to find out. On the tabletop, you get one critical success, two smashes, one sword, one single, and one double on the attack dice, with ‘block’ and ‘dodge’ replacing ‘smash’ and ‘sword’ respectively on the defence dice. Those ‘single’ and ‘double’ icons are the reinforcement system – they count as successes if you have one, or two, allies nearby. 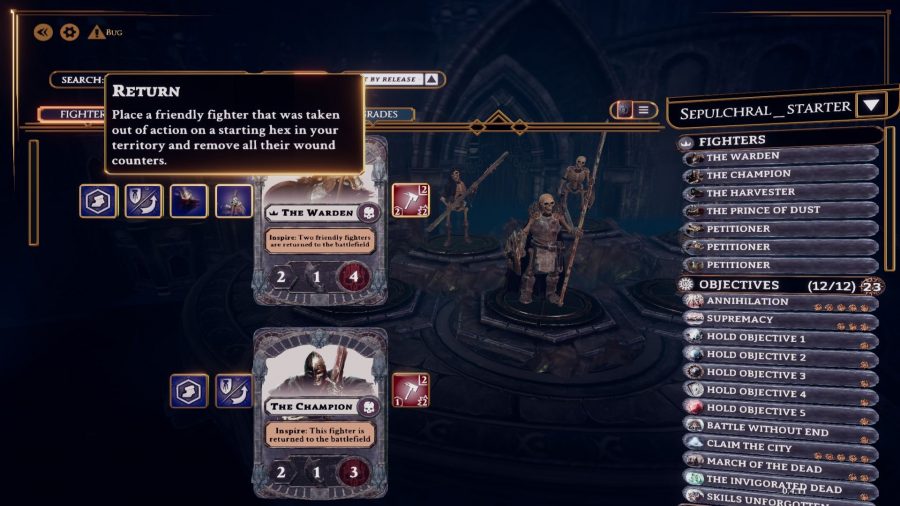 In practice, then, if you include the crit and assume no reinforcements, each dice has a 50/50 chance of rolling a success. Oh, and that’s if you’re attacking with a hammer – sword weapons are looking for the sword icon and therefore have a 1/3 chance of success. That’s another nuance I had to discover on Reddit.

I suppose a fighter’s skill could be represented by rolling more dice, but it isn’t – Severin Steelheart, the leader of the elite Stormcast Eternal warband, rolls the same two attack dice as my rubbish skeletons, and the same single block die as a basic Orc squaddie. The fact that most attacks generally roll two dice and most defences just the one means that attackers are favoured, and that whenever they lose, it’s because of bad luck. This struck the Orcs several times during my game, thus my victory rang hollow. 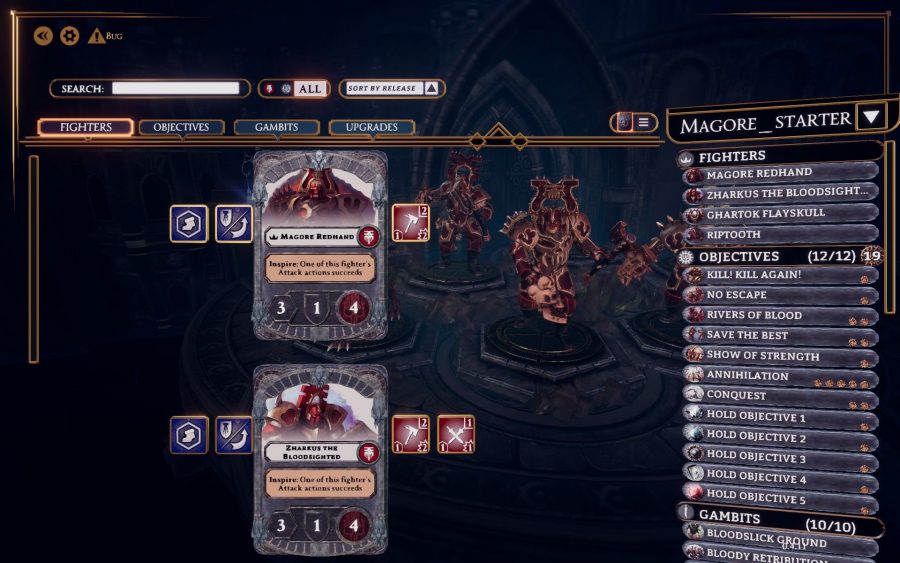 The last warband is Magore’s Fiends (Khornate Chaos). Together with the Orcs and Stormcasts, these three warbands have 11 fighters between them, nine of whom have identical stats. This, combined with a large number of common cards (and a few unique ones that are functionally identical to one another), means they struggle to feel as distinct as The Sepulchral Guard.

The Stormcasts and Chaos are clearly intended to play very differently – defensively and aggressively, to be reductive about it – and while I feel like both could’ve gone further, the poor Orcs are left in the middle, with no objectives or strategies beyond ‘fight’. I suppose that’s in keeping with the simplicity of Orc culture, but it winds up feeling bland, when Orcs should be anything but. The tabletop game demonstrates that we should expect much more content when it comes to new warbands and cards, however, so by the time of release or a little while after, there ought to be plenty more options. 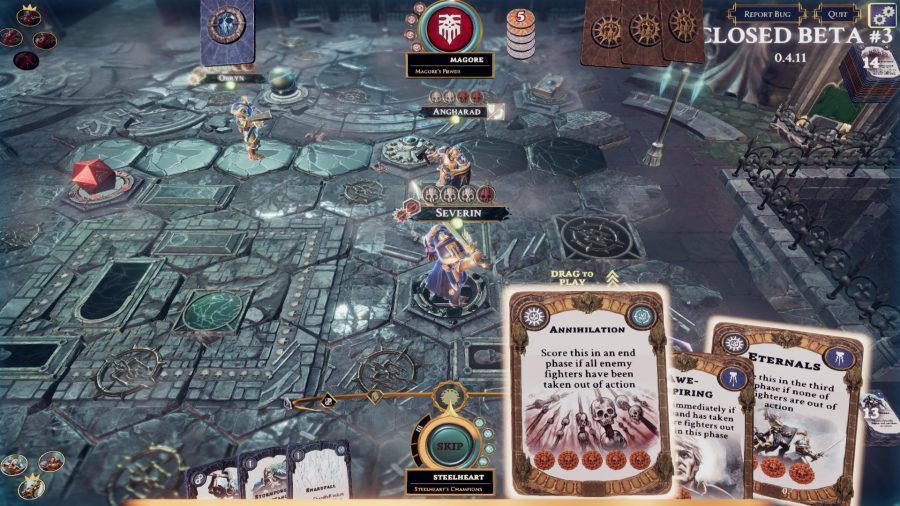 So, I dunno. Having finally moved past my annoyance at Warhammer: Age of Sigmar for replacing its predecessor Warhammer Fantasy, which I played since 1998, I’m sympathetic to this setting – maybe even excited to finally delve into it and enjoy what’s become of all my old rivals. But so far I’m not sold on Underworlds: Online as the place to do it.

The lack of polish in the demo I played didn’t help, and it’ll likely be worth another look when more warbands are added and there are human players who have explored what depths it has.

But every time I’m frustrated at the wild oscillations of luck because a six-sided die can’t represent the balance of skill and chance with the nuance of a percentage calculation; or by the simplicity of the game board, or the abstract nature of its objective markers (one of which, ironically enough, is a far more nuanced D20); or by the arbitrary cap on the game’s length, I wonder if the problem is more fundamental: that Underworlds is a good board game, but to work as a videogame, needs to realise that it is one.