Vermintide 2, much like the original, is a game that glories in swamping you in hordes of enemies. You and your friends stand as four stones in their path, cleaving through the scrum with heavy two-handed hammers, longswords, and polearms. Being Warhammer, your enemies aren’t humans, but overgrown rats – the Skaven plague.

Here’s everything we know about Warhammer: Vermintide 2.

Vermintide is at its best when you and your team are on the cusp of being totally overwhelmed. Developers Fatshark worked hard to fine-tune the chaos, finding the perfect time to send another wave of rats charging at you, or to drop a ratling gunner into the fray, or the most disruptive moment to hit your team with a poison wind globadier.

The sequel significantly expands the pool of enemies that can appear in the attacking horde – Fatshark will be sending Chaos units at you too. “We have something like 28 enemies in the game, as opposed to 12 in the last game,” designer Mats Andersson tells me. “The biggest problem we have right now is getting the mix right from the get go because the amount of combinations that we can throw at the players is staggering.” 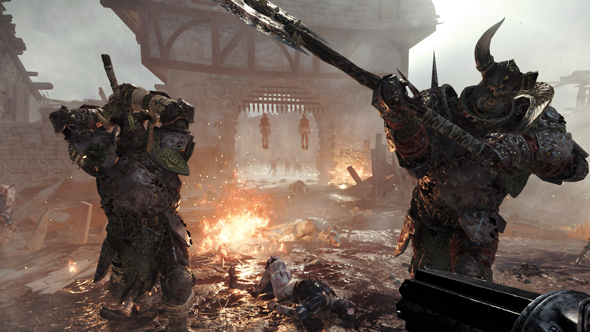 “We don’t design enemies as a solo opponent,” Andersson says, explaining what goes into creating a good horde. “This is not a duellist game where you’re against one Chaos warrior. That’s not engaging at the same level as the Chaos Warrior combined with a horde of enemies and a couple of berserkers.”

Fatshark want players to respond to overwhelming numbers by banding together. They want their game to create situations that has the in-game chat going off like: ‘You deal with the Chaos warrior, I’m going to stun the horde, and you kite that guy away from here because we can’t have him in this fight’.

Like Left 4 Dead and the first Vermintide before it, Vermintide 2’s enemies are monitored by an AI director that builds a horde and spawns them into the map in response to how you and your team are playing. You could play through a level as a rookie and face a much easier challenge than when playing the same level as a more experienced player. 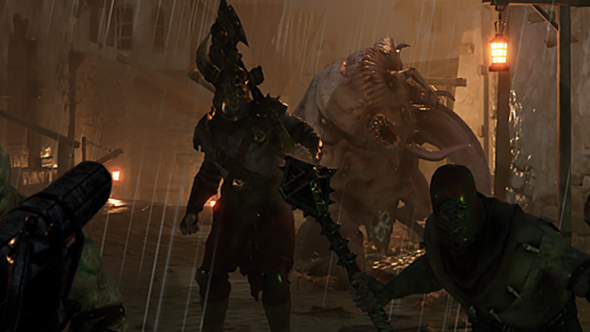 The bulk of the enemies you will face are basic Skaven clanrats or Chaos fodder. But amid the scrum will be enemies that have special abilities or equipment – shields, thick armour, or large and heavy weapons. “They introduce gameplay mechanics that up the difficulty quite a bit,” Andersson says. “You need to learn to read those. That’s part of the fun of the game – you’re facing 50 guys and two of them have special qualities.That kind of prioritisation between a team of players is what drives the hectic, frantic combat experience of Vermintide, which is super interesting to see.”

An odd byproduct of this focus on the horde is that the developers have had to rein themselves in at times. “You can’t go overboard,” Andersson explains. “You’re designing a creature and it becomes your darling. You want to make everything super cool, and yet, sometimes, they just need to do this one thing in combination with the others to create the right experience for the player.” The basic enemies can’t be too much of an individual challenge, then, because there they are there to be something to wade through on your way to killing the bigger enemies.

Where Fatshark have let themselves off the leash are the minibosses. “They are the centerpieces,” Andersson says, “the ‘oh shit’ moments.” Clearly, they have done the job, because that is exactly what I said when I first came across a massive mutated Chaos creature. Easily 15 foot tall, the monstrous pink hulk smacked me full in the face with a meaty tentacle, flinging me across the battlefield. 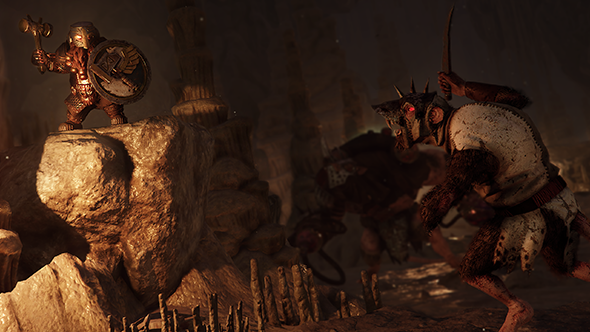 “We had that as one of the goals of melee combat,” Andersson says, when I tell him what happened in my demo. “With the bigger guys, to make them feel big we really needed the player to feel it when they get hit – we knock the camera down, we go to red filter, you go ‘Oof!’ and you have that ringing in your ear. Almost like getting hit in real life. We wanted that realisation where you’re like ‘that was a bad idea’. That feeling.”

What is clear is that the bosses have been carefully designed to teach you to respect them. “The first time you meet them as a new player playing on normal, they should be ‘Oh my God, they’re huge, they’re breaking the whole team’,” Andersson says. Later in the game they won’t appear in isolation though, as after you have shown that you are capable of taking down a boss, the AI director will know to mix it in with a horde next time. You will have to learn to have your team split their attention, two players focusing on a boss while the others thin out the herd of weaker enemies.

“It’s a different challenge from most other games because it’s a cooperative challenge that you and your teammates need to solve,” Andersson says. “You need to coordinate – to talk to each other. We then introduced a lot of challenges to that. That’s hard because it’s unconventional. We can introduce a big guy that does a lot of damage, that’s straightforward, but introducing something that makes it hard for you to actually stay together is harder.” 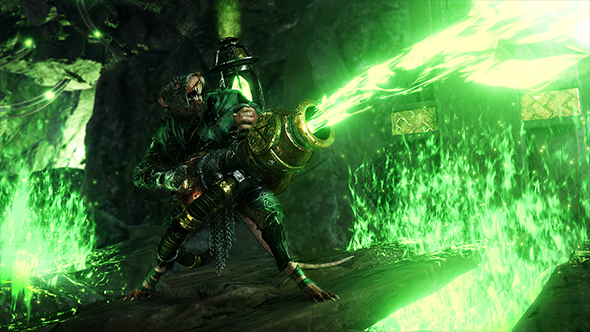 Andersson uses the ratling gunner as an example of this counter-cooperative design. The hulking rodent carries around a minigun that, when he spools it up, carves up the battlefield with streams of bullets. “His purpose is to single you out, if he does you have to run and hide, and it’s that running and hiding bit that we’re after,” Andersson says. “If you run and hide, you’re not staying with your teammates and that puts a strain on that cooperation gameplay and teams have to deal with that in different ways.”

The fraught panic of being in a team that is barely holding against a torrent of enemies is brilliant fun. It means rounds of Vermintide 2 are threaded with moments of blessed relief where you and your friends can celebrate your survival, your return from near-death moments. But, as Andersson explains, creating those sensations is more complex than throwing a sewer’s worth of rats at you.