Vermintide 2’s swarms are as vile as they are numerous, keeping players doused in viscera. As someone only faintly aware of the particularities of Warhammer universe, this is mostly what I expected: blood and guts. What I didn’t expect was that Vermintide 2 is also one of the most quietly beautiful games in recent years.

Here are three more Warhammer settings that we think should get the Vermintide treatment.

In-between bouts of slaughter, I found myself lingering to soak in the world around me. The vistas are captivating, with everything from underground Skaven sprawls to the swaying fields of golden crops as far as the eye can see. Vermintide 2 offers a sense of scale, and attention to detail, that left me in awe.

”At the start of the level process everybody was really excited to go big, or go home,” Fatshark concept artist Patrik Rosander tells me when I ask him how this look came about. “I think we had the same idea for all parts of the game: we would take Vermintide 1 and expand on everything.” The environments of the first game clearly needed work, lead level designer Daniel Platt adds. “Some of the levels in Vermintide 1 didn’t hit the highs that you might expect. That’s something that we wanted to improve on – up the spectacle, like, more effects and more great vistas.” 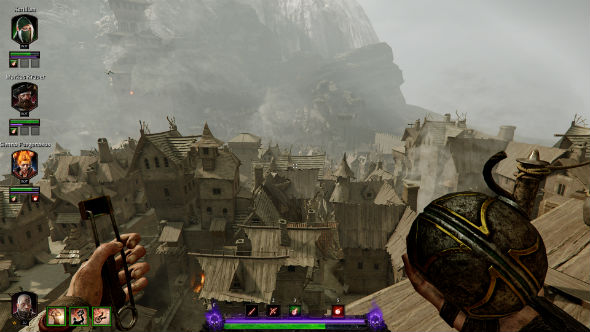 Mammoth-scale openness presents certain problems for a game like Vermintide 2, which relies on funnelling and chokepoints to carefully manage its hordes. The solution is “about building a world outside of the gameplay space,” producer Victor Magnuson explains. “Since this isn’t an open world game, this is a corridor hack and slash game, we must use all the tools that we have to bring the world outside of the gameplay space.”

“The gameplay area isn’t as huge as the background is,” Platt says. “Those two aren’t necessarily married, so you can have a very narrow thing, like a 4 metre or so corridor, but you have a great big wide-open vista in the background. So you feel like you’re out in the open, but the gameplay is actually tight.”

But how to make those gorgeous views feel truly awesome? The team has a few tricks up its sleeve which result in the near-impossibly dense clusters of rooftops we see in Vermintide 2’s cityscapes. 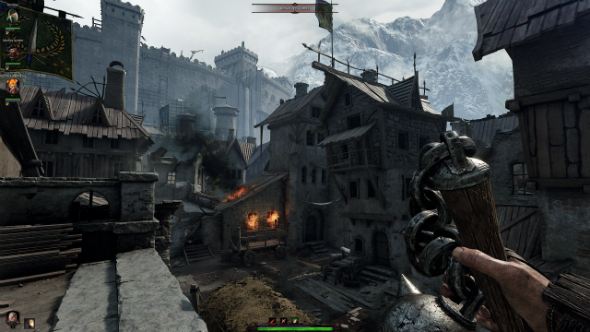 “In Skittergate you have these tents next to you, and when you look out you see the same kinds of tents and the same kinds of assets, tables and stuff like that being used in the backdrop,” Platt says. “There’s this grey area where you don’t really know where the backdrop begins. It’s not like those old western movies where you have like a painted wall, we kind of blur the line for where the backdrop starts and ends. I’m not even sure either sometimes as a level designer where the ‘real’ high-detail assets end.”

“We use optical illusions as well,” Platt continues. “In some places that tent is life-size next to you, but ten metres away we make it a slightly smaller tent, and then ten metres beyond it’s even smaller, but it would like it’s maybe 20 metres away, because you’ve made an optical illusion which makes the vistas seem even larger than they are.”

It’s a simple set of tricks, but effective. Vermintide 2’s most jaw-dropping panoramas are in the likes of Halescourge or Righteous Stand, which offer a mesmerising combination of detail and scale. 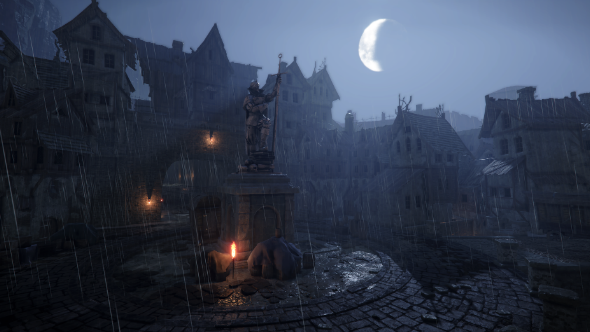 The vista’s don’t just suggest scale, they also work to chain Vermintide 2’s levels together. “You can see the temple from the end of Righteous Stand, when you’re in Halescourge,” Platt says. “We really made an effort to make it feel like a real place.” And as you begin your journey into Empire in Flames, the screen shows you exiting the fields of Against the Grain. It appears to be one interconnected environment.

These techniques pull off an even greater illusion, belying the fact that Vermintide 2’s art team is only 12-strong. ”We’re not a huge team so we have to use smart tricks,” Platt says. “We re-use our assets in clever ways. Maybe we have the same trees in this level and that level but the lighting is different so you don’t notice. Sometimes the weather’s different but it feels like a completely new space. In another we recoloured some of the houses and stuff like that. We also think about bang for the buck, not only for the customer, but for us as well.”

The small team size also brings with it a flexibility you may not find at a larger studio. “We have creative freedom, in the purest form of the word,” Rosander says. “We can just have an idea, like art-wise – I can just talk to Anders De Geer, the game director, and if he gives the thumbs up, that’s going to be in the game, which is a crazy amount of freedom compared to a number of other studios I’ve worked at. That doesn’t really happen in game development to be honest. That’s a really awesome thing to be able to do and it leads to some exciting stuff.”