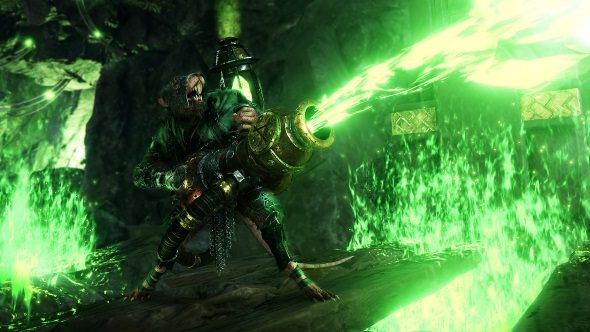 While we know that the only authentic Warhammer soundtrack could come from the likes of 90s metal outfits like Bolt Thrower, there is something to be said for medieval authenticity.

In addition to looking all kinds of lovely, upcoming first-person Warhammer splatterfest Vermintide 2 is tapping the talents of Danish composer Jesper Kyd, most notable for his work with Io Interactive on the Hitman series, but plenty more besides, and he’s hoping to tap into his native heritage for inspiration.

The original Vermintide easily made our list of the best co-op games on PC. Are you practicing with the original while you wait for the sequel? If not, pick up one of our recommendations, and bring your friends.

Building on the concept of the (non-ratty) forces of Chaos in the Warhammer fantasy universe being corrupted Norse tribesmen, Kyd is leaning on his heritage and calling on a variety of historical styles in a blend of music inspired by Norse mythology, with tinges of ancient tribal music and a pinch of dark magic for flavor.

It is Warhammer, after all. If you’re not twitching and buzzing from nibbling on too much warpstone, you’re probably doing it wrong.

Kyd’s official page for his work on Vermintide 2 includes a trio of samples from the upcoming soundtrack. Two focused on the Norsca Chaos faction, and one seemingly to accompany a boss fight against a Troll, and they help establish the tone of the game nicely: This is dark, grey and bloody stuff, punctuated with flashes of sickly green magic, and that carries through to the music quite nicely.

Personally, give me Bolt Thrower any day, but this sounds like a nice enough alternative, although perhaps a little too Movie Soundtrack-ish for me. While Kyd’s work is undoubtedly top notch, and I can’t deny that the tracks well capture the themes presented, I tend to like my videogame music loud, proud and presented front-and-center. Give me Metal Gear Rising’s thundering RULES OF NATURE over ambiance and I’m happy as a clam.

Thankfully, we don’t have to wait long for the release of Warhammer: Vermintide 2. Due for launch in the first quarter of this year, you can wishlist it on Steam here and get in on the violence as soon as it launches.