There’s only one thing I love more than medieval war and that’s dioramas. Fortunately for people with oddly specific interests like myself, there’s Wartile, a frankly gorgeous little real-time war simulator with a twist; everything takes place on a tabletop with tiny, animate figurines. Today, this peculiar title went into early access on Steam, along with a teaser trailer which you can see above.

War doesn’t have to be hell. Check out our list of the best war games.

Wartile clearly takes its inspiration from many hours spent rolling dice and moving figurines around dungeon maps. Tiny little nordic combatants jostle and swing on their bases as they bounce around the hex grids that make up its various maps. But despite this obvious homage to the turn-taking games of yore, Wartile is not a turn-based strategy, but rather a real-time affair with cooldowns and a deck of ability cards. At its core, this is a game about positioning and decision making. 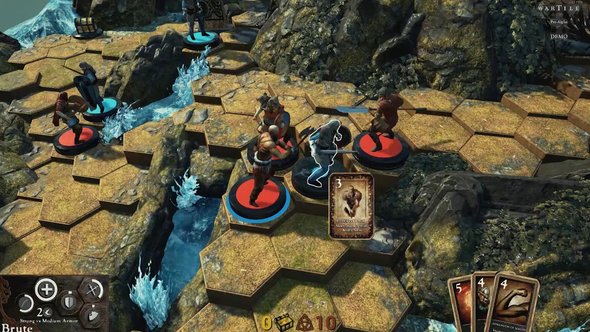 Wartile also includes a fairly deep customization system, allowing you to kit out your miniscule military with custom weapons, armour and abilities before setting sail for England’s shores to plunder and pillage. The collection element of table-top has not been lost either, with both deck building and figurine collection playing a major role in the game’s progression, as you forge a Kingdom in Scandinavia and England with your Viking army. Finally, you can take on your friends over various fronts, with both quest-based and full competitive multiplayer.

But it’s the art style and graphics which will arrest the attention of most players. The fish tank style level design is very striking, with a total juxtaposition of the relatively lo-fi nature of tabletop gaming and the high quality graphical and lighting effects employed by the team at Playwood Project. Indeed, the studio themselves explained that “each Battle Board is an intricately realised digital diorama complete with tiles that allow players to strategize their tactical moves and attack in real time.”

You can pick up the early access version of Wartile on the Steam store for $17.99/£13.49. Also, their official website offers news updates, as well as some lovely screenshots.