Right off the bat, turn-based RPG Wasteland 3 is gory. Thrust into a blood-drenched cinematic, a group of Rangers scramble to find cover as they fight off an ambush while trying to navigate across a frozen lake in Colorado. Immediately people are dying, people you think will escape and survive – it’s obvious that Wasteland 3 isn’t going to leave any room for mistakes.

After the bloody encounter, I choose my first two rangers; a young couple wielding a pistol and assault rifle. In the first battle I get a taste for what the new vehicles can do, launching a torrent of bullets into a thunderous mech that occupies most of the battle arena and toppling the titan The initial encounter shows me how to use my abilities and take cover – and when and how to pick a fight, and I leave the smouldering wreck to continue my journey to hunt down The Patriarch, the only person that can help the rangers in their time of need.

This outburst of violence all takes place in Colorado, Wasteland 3’s new setting. It’s the perfect landscape for the sci-fi elements developer inXile introduces and as I traverse the frozen ground, scarlet blood incongruously splattered against the ice, and possibility of peril around every corner.

“We wanted to take it to an environment that was very different from the previous one,” lead level designer Jeremy Kopman tells me. “Partially just for variety, but also to explore how people would survive in extreme environments without the trappings of modern civilisation.” 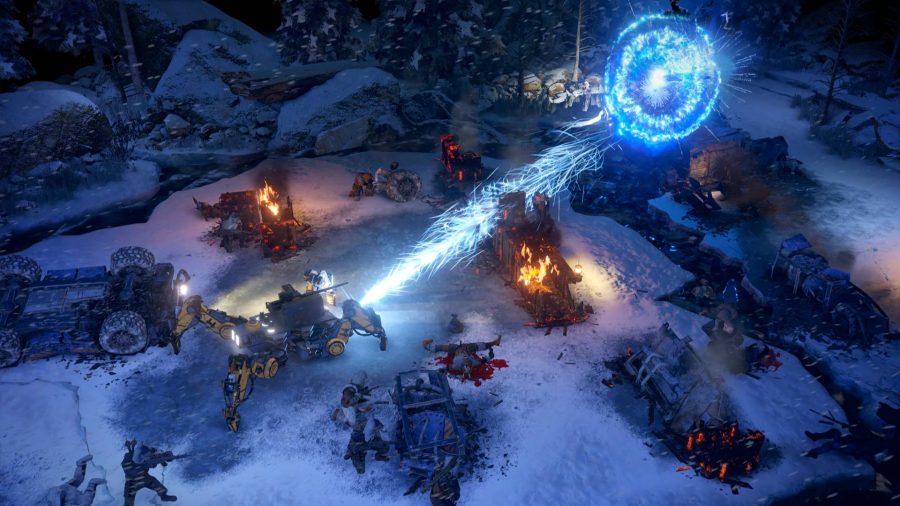 The introduction of such harsh elements has had a bearing on the narrative, certainly, but it also opens up new gameplay mechanics – freezing enemies with cold grenades and overcoming the cold climate, for example. Survival is a key theme in Wasteland games and Wasteland 3 really drives into what Kopman calls, “order versus chaos,” and the fine line between objectively evil or good characters. Kopman describes The Patriarch as, “somewhere in the middle, and you get to explore his very specific perspective. There’s other characters you’re going to meet, and they’re going to say he’s terrible, he’s brutal, there’s no mercy. But he’s also kept hundreds of thousands of people safe and fed and warm in this horrible landscape.”

The lines don’t seem that blurred when we meet new enemy clan, The Dorseys. The group of fanatical, cannibalistic survivors are interested in the deluge of blood. One of them jumps up and down, decorated in the innards from a dead ranger and throws the guts up in the air in some celebratory ritual. I’m struck by the memories I’d had playing Borderlands 3 last year and how similar The Dorseys are to that of Psychos. They make for good fighting fodder, sure, but they’re not especially imbued with any sense of depth. It’s tiresome to think that the apocalypse would only be full of people so inherently evil that they bathe in the guts of fallen humans for fun. 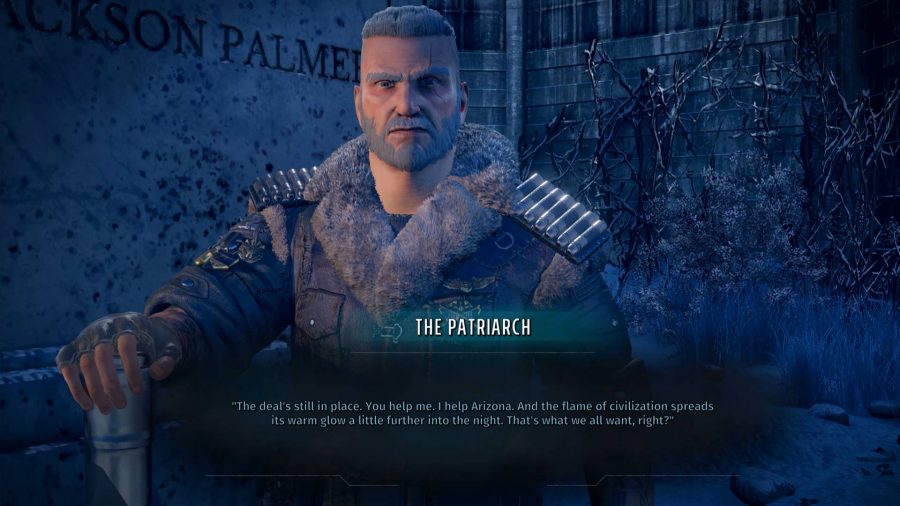 But the difference between the two becomes obvious when the humour lands, something the irritating enemies and overall tone of Borderlands 3 rarely stirred in me. I laughed out loud on several occassions during my Wasteland 3 playthrough, the occasion due to a notice warning me that the awaiting mech will ‘fuck me up’, and the second when I ask one of The Dorsey leaders, a bombastic, blood-junkie, why he was doing all this. He replies “because it was ‘ordained’” – I shoot him in the head and the remains fly against the screen. Sometimes the violence seems irrelevant, sometimes superfluous, sometimes shocking, but sometimes – funny?

There are plenty of dialogue options that change the narrative path and outcome – some are locked behind skills you’ll need to purchase for your character and include combat, social, and engineering boosts. Characters can be formed this way, and while they start as something of a blank slate, dialogue and action choices create new paths and narrative threads. The character interface is clear but extensive, and by being able to interact with my rangers this way, it gives them the personality and has the intimacy I craved from my Phoenix Point soldiers. 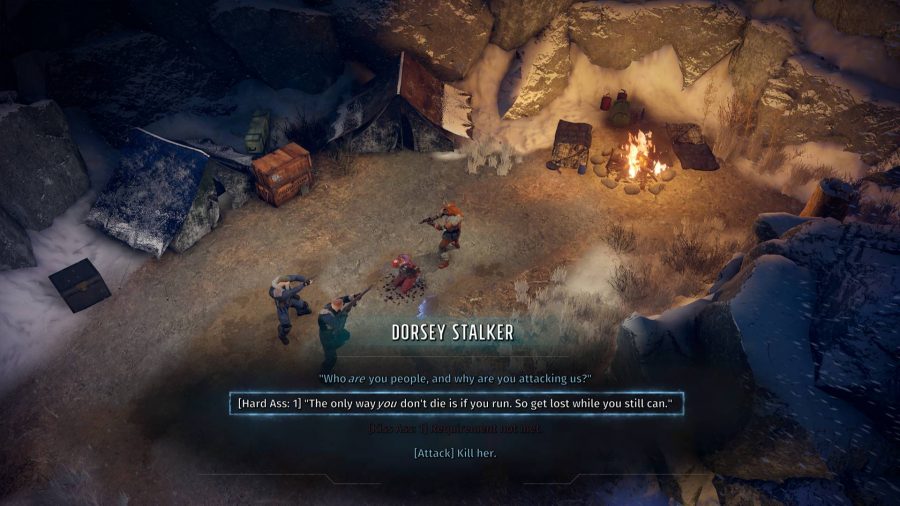 Kopman and I discuss all the potential outcomes of each scenario and how much individual actions affect the narrative. Wasteland 3 will have at least ten endings, divergence I catch a glimpse of after replaying a scenario making different choices that lead to alternate combat events. In the first instance, I shoot at my ally’s hostage taker, who in turn kills my friend, but I’m able to sneak up on the next group of enemies and detonate some oil barrels, killing almost all of them. However, on my second playthrough I defuse the hostage situation and the enemy flees, warning the rest of her group that we are on our way. When we arrive they are expecting us and in defensive positions, spread around walls and across the battlefield. And it’s not just the encounter that changes, the friend I saved can be later recruited as a companion.

I also came across a finely dressed cat perched on top of a wall dressed in a trilby hat and bandana called Major Tomcat. If you purchase the animal whisperer skill then he’ll gladly join your crew, too. He’s also quite the smoker, so if that ally you saved earlier in the game tosses you a pack of cigarettes to wave at Major Tomcat, he’ll be persuaded to follow you into battle.

“Some companions are non combat, but they give you some sort of status effect bonus,” Kopman says. “So things like small animals – cats and rabbits, they’re not going to fight yet, but they will give you a little bonus while they’re following you. There are other animals that you can find later in the game that will fight with you. There’s one that we showed off in our alpha which was a bear cub that you can tame and then it follows you around and then it will go on mauling people for you.”

From what I’ve played so far of Wasteland 3, the level of depth, characters, atmosphere, and scale of the game only leaves me wanting more.