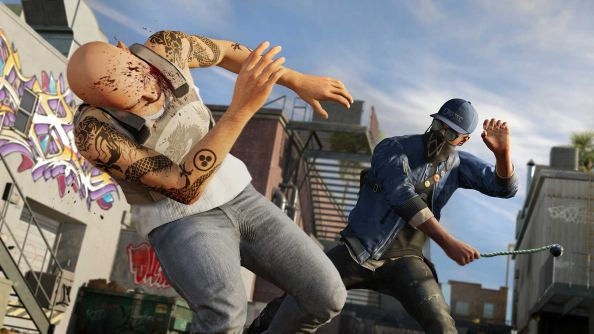 Aiden Pearce steps off the plane at San Francisco International. He checks his phone, because that’s all he knows how to do. It’s 80°F. Suddenly, a trenchcoat seems like a silly wardrobe choice. The summer sun undoes the knots in his brow, and he struggles to remember what he was feeling so grumpy about. His East Coast manners, born in the red brick alleys and oppressive density of Chicago, are out of place. He loosens up.

Then, poof: just like that, he’s not Aiden Pearce anymore.

“San Francisco’s about wide open, huge vistas, a lot of colour, and eclectic groups of people who really don’t give a shit about how stuff should work,” says the creative director. “I kind of relate a lot to that. I like that.”

Morin and his team talked to the companies in Silicon Valley. They “listened to all of the vibes” of the Bay Area. And it quickly became obvious they needed a younger hacker.

Aiden was a brutally violent Batman figure who had already paid a nasty price for his career in heist hacking by the time Watch Dogs opened. Which explained the attitude, but was at odds with the promise of the game – the inherent glee of manipulating the traffic lights and bridges of the urban world around you.

Marcus Holloway wears the bandana and the cap. Like the Assassin, he keeps the key signifiers of his series. But everything else has changed. Born in San Francisco and gentrified out to Oakland, he grew up racially profiled by ctOS – the same surveillance database that powered Chicago – and linked to crimes he had no involvement in.

“He’s the kind of guy who had all the qualities to do anything he wanted,” says Morin. “But for some reason profiling decided that that was not for him.”

Now 24, he runs with DedSec, Watch Dogs’ hacktivist collective. He’s not tortured; he’s having the time of his life. 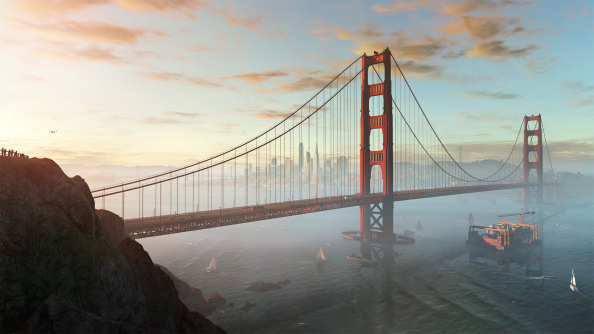 “I wanted to bring [in] this ‘everything is possible’ type of attitude that happens in California,” Morin elaborates. “For the first time he’s with other people who understand what he wants, who understand how these things work. They see an opportunity in exposing the truth to people and making a difference.”

DedSec want to shine an uncomfortable spotlight on the controlling elites of San Francisco. They want to nab more powerful hardware, so that they can do that first bit better. And they want to do it all as conspicuously as possible, pulling off audacious stunts and gaining ‘followers’ like XP.

Here, again, Morin wants Watch Dogs 2 to be a local affair. Chicago, as Ubisoft became fond of telling us over the course of 2013, is one of the most surveilled cities in the US – and so the first game’s themes coalesced around privacy. The Bay Area, by contrast, is the home of social media – which allows Watch Dogs 2 to explore the economy of information. Now that everybody’s willing to spill their secrets onto their phones, where do those secrets go?

That’ll be the subject of one in-game operation. Then the game might flip to the impact of AI advancement, and again to crime profiling. Every overarching mission will have a beginning, a middle and an end, and reveal some new, terrible truth to the people of San Francisco. 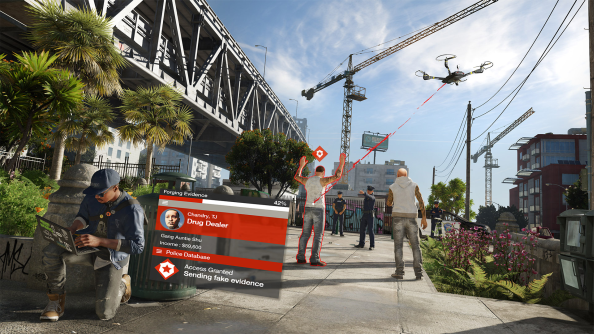 “As you do that, you can see Marcus going from the ‘Fuckin’ A’ type of attitude to a very pure motivation,” notes Morin. “You get to more and more important subjects as you progress.”

All of which sounds very noble, and quite unlike the real world. Just as you can make a compelling argument for hacktivists as arbiters of vigilante justice, you can link them to the uglier side of the internet that trolls and harasses.

Morin indicates that Watch Dogs 2 will tackle that dichotomy in its story. Though the members of DedSec share similar goals, they each have their own motivations and represent a different perspective.

Sitara – the artist and DJ who picked the particularly fine piece of hip hop that accompanied Marcus’ E3 reveal mission – is perhaps keener on ethical debate than Wrench, the anarchist who sports a ski mask that blinks emotes. The player decides where Marcus sits along that spectrum, and now that Ubi have stripped out Watch Dogs’ reputation system, the game doesn’t judge. 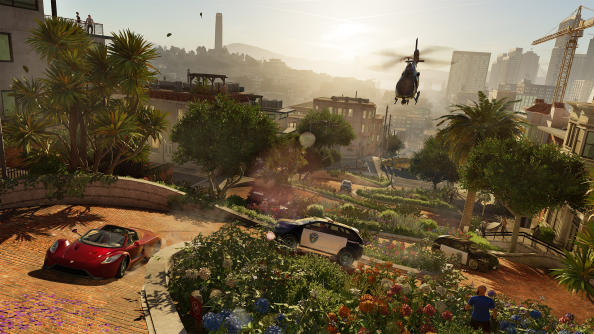 “The world responds to what DedSec becomes,” says Morin. “But it’s never going to be, ‘They should be banned’. It’s just going to be a debate, and that’s what I like about it.”

Most sequels come about once a studio knows how its predecessor has performed, but Ubi Montreal never really stopped working on Watch Dogs. Morin took a three month holiday, and then returned to the problems at hand. The iffy driving model, which he says is now more accessible and interesting. And the main event, the hacking, which has become far more involved.

“In the same way the shooters can go faster these days because people are used to the mechanics, we benefit from having many players who understand the base,” he expands. “If you can push someone in the street or punch him, in our game you kind of know his personality and whether he has more chance of being pissed off. 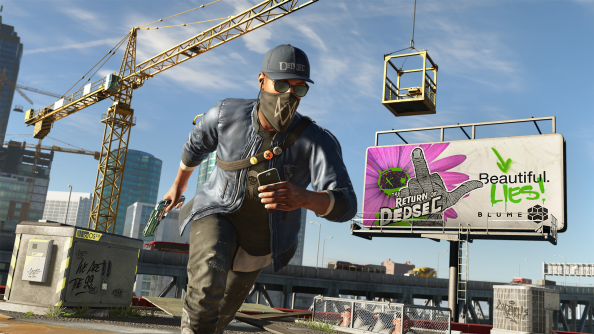 “And guess what, that’s useful. You can make him pissed off and bring him into a guarded area and maybe he’s going to start giving shit to some of the guards, and it’s gonna escalate.”

Rather than pointing, pressing a button and witnessing an outcome, you’re now controlling the objects you hack – steering vehicles as if you were in the driver’s seat. And then there are the more creative combinations: strap a sticky bomb to the front of a car, for instance, and it becomes a proximity bomb you can send hurtling towards an enemy.

“This is what, when players stop playing, sit down and eat something, will make them go, ‘Wait a minute, what if?’ That’s exactly how I want players to feel when they play the game,” Morin enthuses. “It’s how a hacker feels when they discover a new system to break.”

Standing in Ubi Montreal’s Oakland, you can see the silhouettes of San Francisco’s skyscrapers across the bridge. With no baggage but the rucksack that houses Marcus’ laptop, everything still feels possible. By ditching Aiden, Morin and his team have turned Watch Dogs into a different, more Californian sort of power fantasy.