Watch Dogs 2 has failed to dislodge Call of Duty: Infinite Warfare from GfK Chart-Track’s top spot, despite the fact that Activision’s sci-fi shooter is now in its third week. Following poor pre-order numbers, this suggests that Watch Dogs 2 is off to an alarmingly slow start, but Ubisoft aren’t the only ones – or so they say.

Watch Dogs 2 doesn’t come to PC until next week. If you have any questions in the meantime, here’s everything we know about it.

Here’s the report from GfK Chart-Track, which should make bleak reading for any Ubisoft exec, especially since Infinite Warfare had a terrible launch of its own. Based on leaked data, one can estimate that COD’s sales this week were around 80,000. Chart-Track says Watch Dogs 2 was “narrowly” behind this, whereas its predecessor sold 380,000 units in its opening week.

It’s worth reminding you at this point that GfK Chart-Track only cover physical game sales in the UK and that Watch Dogs 2 hasn’t yet released on PC – we have to wait until November 29 – but even with these caveats, this will be a huge disappointment to Ubisoft.

In response to the news, Ubisoft are pinning their hopes on a long ‘tail’ of sales as the positive early reviews sway gamers. A spokesperson said the following to Eurogamer:

“We’re incredibly happy with critics’ and players’ very positive reception of Watch Dogs 2, which should bolster support for the long-term success of the game. It is true that first-day and first-week sales for a number of big games, including Watch Dogs 2 and titles from our competitors, are comparatively lower than previous versions in previous years.

“However, we expect both week-two and week-three sales to be above traditional sales patterns. There is a trend toward games, especially high-quality games, having stronger and longer ‘tails’ as favorable reviews and word of mouth spread. Watch Dogs 2 is already considered a tremendous addition to the open-world action adventure series and we’re confident that millions of players are going to love it.” 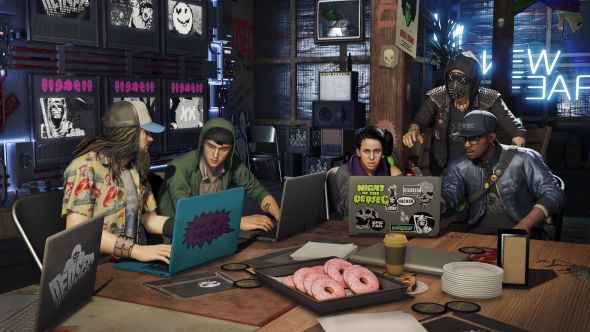 Yves Guillemot, Ubisoft’s CEO, said Watch_Dogs 2’s poor pre-order numbers simply reflected caution from gamers given the surprise disappointment of the original, and predicted an uptick in sales when reviews turned out to be positive. They largely have been, yet here we are at the end of a bad launch week.

It’s true, though, that Ubisoft aren’t alone in this. Several other recent Triple-A titles are also reportedly selling badly, including Call of Duty: Infinite Warfare, Titanfall 2 and Dishonored 2. It’s possible that customers are simply saving their money for Black Friday, given that triple-A is more expensive than ever.

Ubisoft have a lot riding on Watch Dogs 2 as they have no other Triple-A games out this holiday season, and are facing a possible hostile takeover as media conglomerate Vivendi continue to grow their shareholding (though Vivendi deny that this is their plan). Ubisoft are in the news in yet another unfortunate way as five of their execs are currently accused of insider trading.