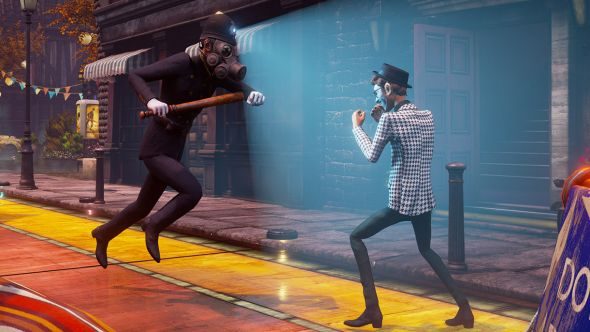 Update September 7, 2017: The increase in price for We Happy Few has not proved popular, but Gearbox say it wasn’t their decision.

On August 16, We Happy Few increased its price from $29.99 to $50.99 – a ‘discount’ on the planned launch price of $60, as a standard retail game. This is at the same time as doing a deal with Gearbox to increase the scope of the game and sell it in shops. The people are not pleased.

There’s quite a few happy survival games in our list there.

A price increase was always the plan, as pointed out in this Steam post from before the game launched into Early Access. Compulsion never specified how much it would go up, and normally Early Access to retail release price changes aren’t quite this dramatic.

As you might imagine, many are taking the price increase as a sign of Gearbox’s involvement. Given their unpopularity after Aliens: Colonial Marines, Duke Nukem Forever and Not Making Borderlands 3, it’s a snowball of hate that can be seen in the Steam reviews. An overall Mostly Positive rating is counteracted by 64% of the 250-or-so recent reviews being negative.

Matt Cox, a senior designer at Gearbox, defended the decision and the publisher on Twitter. He points out it wasn’t Gearbox’s decision,saying it was a reaction by Compulsion to the great reception to the game, adding a campaign and much more as detailed in their announcement post.

As for the effect it has actually had on the game, the day of the price increase saw a massive jump in player count and a bump in SteamSpy numbers, although they are fluctuating quite wildly. Neither are particularly huge on a wider scale however, so we’ll have to wait for launch – April 13, 2018 – to see how well it’s done.

We Happy Few has never been on sale, as the devs say it wouldn’t be fair on early adopters and Kickstarter backers. Since launch, it’s been priced at $29.99. On August 16, that’s shooting up to $50.99.

One of the things that’s changing is the dialogue in quests, which should now reflect the fact that the NPCs in We Happy Few all know each other. They’re attempting to make conversations feel more natural and reflect that.

Elsewhere, the programming team are working on procedural cities, UI improvements, and fixing crashing issues. The animation team is working on a bunch of cinematic, idle, and ambient animations to make NPCs seem more human.