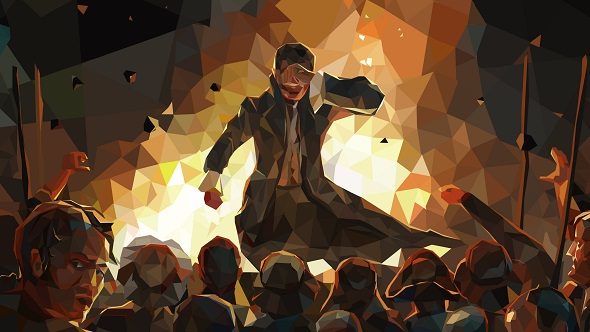 Outside of Assassin’s Creed and some strategy games, the French Revolution is woefully underrepresented as a time period within videogames. With intrigue, social upheaval and all those heads being chopped off, it ticks all the boxes for a great potential setting. Polyslash are attempting to shed more light on the French Revolution, with their judicial simulator We The Revolution.

For more intriguing indies, check out our list of the PC’s best indie games.

In the same vein of games like Papers, Please, This is the Police and the upcoming Need to Know, We The Revolution tasks players as a judge of the Revolutionary Tribunal who must preside over cases during The Reign of Terror. With counter-revolutionaries, criminals, innocents and political enemies being hauled up to the dock, it is your job to pour over case files, examine evidence and judge if a person has a date with Madame Guillotine.

As aristocrats, revolutionaries and regular Parisians face your judgement, the player has a massive sway over the direction of not only the Revolution, but the French legislature. With so much power at your fingertips, you could try upholding justice or you could give into political gamesmanship, sending anyone who dare question you to the chopping block. Your actions will not go unnoticed however, as your opponents can attack your family, rally revolutionaries against you and see to your meeting with the guillotine.

“Thanks to such tools as the intrigue-building system, the player will feel they have tangible influence over their surroundings – the city, their family, the citizens, and, most significantly, their political enemies.” says game designer Patryk Polewiak We want the player to feel the emotional impact of reaching for power in Paris blazing with Revolutionary fire.”

We The Revolution poses some hard hitting moral questions, as players must balance potentially pacifying the Revolution with keeping their family safe from the end of a bayonet. Polyslash currently predict We The Revolution to launch on Steam in winter 2017, so get reading through your law textbooks in readiness.