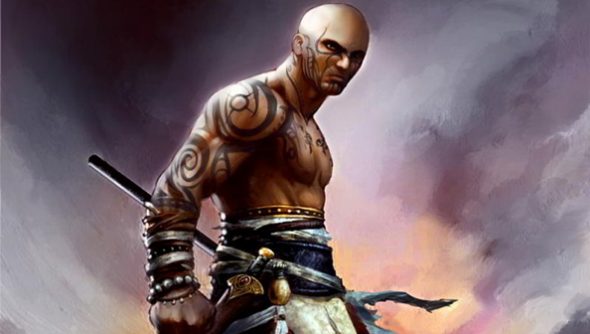 Upon its release a month and a half ago, Overhaul’s Baldur’s Gate rejig was exclusive to the developer’s own distribution service, Beamdog. They were quite adamant about that. Fan protestation has since seen publisher Atari relent and push out a version on Steam this week – but not in a form Overhaul creative director Trent Oster is entirely happy with.

“So, working with our partners at Atari, after many requests, we’ve managed to bring #BGEE to Steam,” tweeted Oster yesterday.
“Atari did the integration for #BGEE on Steam, so it is a very basic setup. [Overhaul] were not involved. With regards to updates, we have to submit updates to Atari for them to prepare for Steam. There will be a delay.”

Atari are solely responsible for the upkeep of BG:EE’s Steam version. Oster doesn’t expect the cloud save functionality featured in the Beamdog release to be added in the future, but promises Overhaul are doing “everything we can to help Atari keep the other versions out there up to date”.

“Our plan is to do cloud saves via our own service. Steam cloud saves wouldn’t work cross iPad, Android, Mac and Linux.”

“We have not been able to reach an agreement with Atari regarding Steam keys for existing users,” he added. “We are still trying.”

One customer on Twitter suggested that early adopters “always get screwed”.

“I disagree,” replied Oster. “You get the game early and you get updates instantly. Steam version is currently 2011.”

Baldur’s Gate: Enhanced Edition on Steam is priced identically to its Beamdog sibling at £14.99.

The Beamdog version of BG:EE is actually relatively painless – rather than force you to install yet another distributor client, it uses a dedicated launcher application needed only to install and check for updates. And if you want to switch PCs, you can grab the client from Beamdog’s site to download the game again.

So I suppose the question is: how much is a tidier virtual shelf worth to you?

We had a chat with Trent Oster a while back about “building BioWare 0.6 MK 2”, but we certainly didn’t review Baldur’s Gate: Enhanced Edition.