This week’s playlist reveals the full spectrum of the team’s competence.

Jeremy and his girlfriend learn that together they can build a fully-working farm in Minecraft. He is what we will call billy goat competent.

Nick tries his hands at political intrigue in Crusader Kings 2 and doesn’t do an entirely bad job of it. Not at first. He is billy goat passable.

Julian manages to kill his entire crew in Payday 2 because he can’t turn on the drill to open the vault. He is billy goat fuck up.

My phone rang on Friday morning. It was my girlfriend, informing me that the perimeter of our animal pens needed to double in height. Attempt to slaughter a chicken from the inside, she reasoned, and there was a chance it would hop clean over the fence to escape. She was right – and before the call was over, I knew where I’d source the materials for the upgrade. A nearby copse of birch trees wouldn’t last the night.

Call it a balls-of-steel deficiency or a willingness to succumb to the sedentary life offered to the contemporary games journalist – but I’ve never been much of a hunter-gatherer.

Yet after one evening of cooperative Minecraft in Survival mode, without ever exchanging a word on the subject, the two of us had fallen into complementary domestic roles – she at the house luring cows to the pens with the promise of wheat, me burrowing through barren cobblestone until I hit bedrock.

I’d been looking for iron ore to smelt into buckets, which we’d then fill with milk. I don’t think we’d thought any further down the line than that; the idea of milking a cow seemed in itself unfathomably exciting.

I’d never quite got around to even crafting a hoe when playing Minecraft alone. While my cave networks were extensive and my pitch-black expeditions breathless, my structures had always been a little, ah, rudimentary. Our new farm was the product of our combined playstyles – she the architect, me the stuff-getterer – and I’d never enjoyed the game so much.

Somewhere far beneath the house, in the glow of a redstone seam I didn’t yet have the tools to mine, it occurred to me: none of this had to happen. We could have pushed on perpetually toward the horizon, building boats, hiding out in holes at night, and marvelling at the results of Mojang’s procedurally-generated wonderscapes – the jagged peaks, the impossible waterfalls.

Instead we built a home and made it safe. I suspect that says at least as much about us as it does about the game. 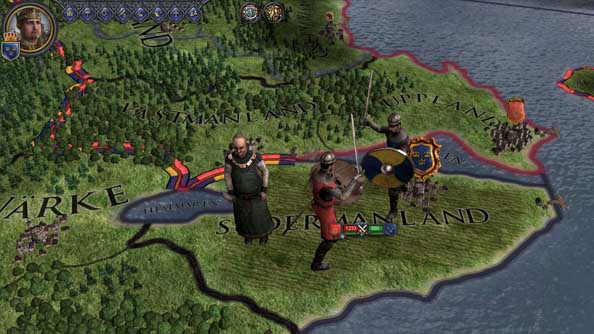 More like Drama Kings 2. This game has had my jaw drop more than any other game due to sheer amount of shit that goes down. I’ve only had one playthrough so far and I have come out of it horrified. Here’s some examples:

I start the game with my own custom ruler. I decided to try out the Duchess of York, being close to home and all. Within ten days of being in existence, I’m notified that someone tried to kill me in my sleep, but my guards had chased them away.

Time to find out who hates my guts. I opened up my family tree. My father and mother are dead and I’ve only got one blood relative, my brother. His opinion of me was -47. Eeek. I tried to see what I could do to appease him, but it was futile. He wanted far too much money to bribe and I didn’t want to give him any titles.

He would just have to die.

I set my Spymaster to go set up shop in his home, raising my assassination chances by a moderate amount. Then a couple of days later, something happened. I had uncovered a plot from my brother to kill the King of England. Jackpot.

I didn’t even need to spend the huge amount of gold to attempt to assassinate him. The King would do all the dirty work for me. I sent word to the boss of England and he responded by throwing the silly lad in prison. Jobs done!

The King then gave me a flashy title and invited me to brunch down in his castle. Hell, I just potentially saved his life, I’m not passing down a free meal. I accept the invitation and off I trot to go have dinner with the big man.

Everything was going well until I was shown a certain notification. See, the King had taken a liking to me. A like like liking if you know what I mean. He led me to a secluded place in the royal gardens and we did naughty things.

Fast forward two weeks later and I’m back at home. A notification pops up. I’m pregnant. Wait. What? I’m pregnant!? I don’t even have a husband… oh shit.

I was with child, and it belonged to the King. I had just committed the biggest scandal of the century and things just got serious. The news spread, all of my vassals intrigued as to who the father was. I could do nothing but wait it out and try and play the whole thing down.

Well I didn’t even get the chance. Six months into the pregnancy, I’m dead. Poisoned. What’s better yet is I went down knowing the name of my killer. Queen Mathilde of England. I can’t blame her I guess.

The final kick to the teeth was next. Since I had a blood relative, I could continue playing. Except my only blood relative was my brother, currently rotting in the depths of a dungeon for eternity. By trying to solve one problem, I had doomed myself to an early exit from history. But man I didn’t half go down in a ball of fire. 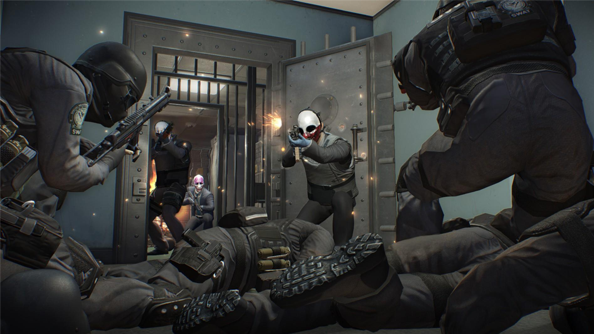 We were robbing a small bank in a nondescript part of Washington. While the rest of the guys took out the guards and began securing the inside of the bank to defend against the incoming waves of police, I had gone round the back to pick up the thermal drill we’d use to open the vault. Our contractor had left it in a bag in the car park.

I was lumbering back into the building with the equipment slowing me down.

I had to take it through to the vault room which was on the far side of the bank. The police had already turned up and were trying to pull hostages out of the building. The other three had taken up positions in the entrance hall and at the windows to shoot at anyone who came close.

In front of the vault there’s this little white box overlay where you’re supposed to set up the drill. I pressed ‘F’. Nothing happened. I tried pressing ‘F’ on the door. Nope. On the floor. Not that.

It was starting to get awkward now. Here we are in the middle of a police assault and I’m standing holding my bag and staring at the vault. I didn’t even know how to open up the chat window to ask what to do.

One by one the team were picked off by the tactical teams.

The atmosphere in post-game chat was a little cold.

“Why didn’t you set up the drill?”

“I pressed ‘F’. It wasn’t working. I tried the door, the floor, the walls. Nothing worked.”

Then I was kicked.