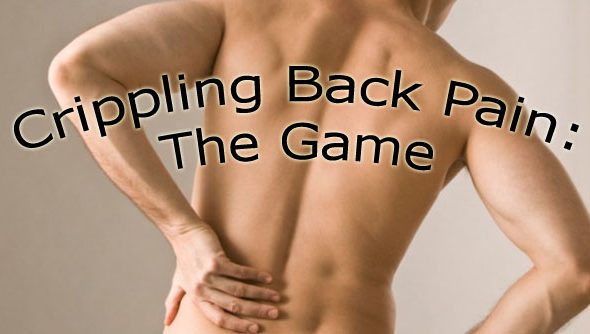 It’s Sunday, having tired yourself out making snowmen, failing to dodge snowballs, and generally using the snow for all its worth, you’ve found yourself pooped and needing to just sit back and relax with a good game or two. You could stop at two but here we have five that you can throw yourself into. Actually, in Rob’s case you need to really throw yourself in, can’t slip a disc without a little bit of effort.

If you know me, you know I love strategy games and fully subscribe to Sid Meier’s maxim that a good game is a series of interesting choices. So I just gotta tell you about the fascinating strategy game I’ve been playing for the last week: Crippling Back Pain.

It’s kind of an ARG, and it makes even the most mundane and inconsequential actions become critical decisions. Normally, you might just say, “I am thirsty, I shall have some water.” But that’s not good game design, it’s a decision without a trade-off. But in Crippling Back Pain, you have to weigh all kinds of factors. How thirsty are you, really, given that having that glass of water means eventually you’ll have to use the washroom? Because it’s not like that’s easy anymore: first there’s the excruciating process of leaving the bed, followed by the dangerous and painful walk across your apartment. Maybe you should just go thirsty for a bit and postpone that pain, but you have to keep hydrating if you are going to continue taking painkillers and loosening the rebellious muscles that have put you in this predicament.

Crippling Back Pain also comes with a fascinating faith system. As you writhe, immobile on whatever surface you most recently deposited yourself, you acquire “desperation points” that you spend on promises to yourself and the deity of your choice. Early game choices are pretty obvious, spending your points on technologies like, “The vain hope this will be over quickly” and “Maybe sleeping will fix it.”

But later on you spend points on advanced techs like, “Promising to get exercise regularly” and “I swear I’ll use that standing desk more for work.” It’s not clear whether these resolutions provide any immediate benefit, but buying them seems to help. If you follow through on them, there is a chance you will not have play Crippling Back Pain as much in the future. But for now, I’m working my toward the endgame. I’m trying for the Transcendence Victory where I learn to stand and walk erect again. I think War Thunder might be the cheesiest name for any war-related game ever and I absolutely don’t care. I don’t care what you think of the silly name or how silly you might think I am for playing a silly-named silly game, because War Thunder is brilliant and if you haven’t yet read my thoughts on the beta then I absolutely demand that you do.

I’ve teamed up with friends of mine to form wings and to cover one another’s backs, to dive down into canyon’s together and watch over each other’s attack runs. War Thunder’s dogfights are already a lot of fun, fantastic duels fought with a forgiving flight model that still respects good flying, but they become something else entirely when you have a friend or two on Mumble calling to you over the airwaves. Sometimes you can only hear their voice, other times you catch the chatter of their machine-guns as they’re firing, or hear the explosions erupting around them, distant background blasts that come through your headphones as they call for help.

This week I’ve torpedoed battleships, I’ve bombed airbases, I’ve strafed tank columns and I’ve dogfought (if that’s a word) between mountain peaks. I’ve done those things almost every evening, between snatches of dinner and trips down the road, and I just want to do it more. I’ve gradually started to unlock a few aircraft and now my hangar is a mix of light bombers and fighter planes, but my progress has almost exclusively been on the British tech tree and there’s so much more out there that I can try.

I’ve said it already, but I’ll say it again: War Thunder is coming along very nicely and, as new players arrive, the battles are getting more frantic, the skies more crowded and the my kill tally much, much larger. If you see me, watch out, because I don’t take prisoners. I’m warming myself up for the release of Ninja Theory’s reboot, DmC which is released on Friday. I originally had Devil May Cry 4 for my Xbox 360 back in my console days and played it quite religiously being a huge fan of the series. I tried installing the port of Devil May Cry 3, yet it fails to meet the very minimum. My Xbox 360 control doesn’t work, no option to fullscreen, FPS stuttering and drops every other second. When speed, precision and timing is key in a game like Devil May Cry, the latter makes it unplayable.

So 4 GB’s wasted and another 7 GB’s downloaded, I fired up Devil May Cry 4 with higher hopes. But how would the PC port handle?

Pretty darn good. Bearing in mind this game is five years old, it supports DirectX 10 out of the box, along with 1920×1080 resolution, MSAA, V-Sync and various texture qualities. It also takes full advantage of the PC’s superior power, giving you a “Turbo Mode” which speeds up the game to 120%. It also offers a difficulty mode named “Legendary Dark Knight Mode” which allows for a far greater number of enemies on the screen at any one time, sometimes to silly proportions.

All of this makes the PC version the best of them all, naturally. I 100%’ed the game on my Xbox 360, including beating the rigorous “Hell and Hell Mode”, where you die in a single blow but your enemies are harder than normal. Now It’s my task to achieve the same all again before Friday, ready to take on whatever Ninja Theory can throw at me. This weekend I’ve set out to enjoy the punching bag of online gaming. What I want to do is reconcile this thing which treats its free-to-play citizens so poorly, which exiles its same-gender romances to a single planet as an afterthought, with the game pitched as KOTOR 3, 4, 5, 6 and 7. Maybe turn back the clock a bit, and remember what SWTOR was conceived as – a post-Neverwinter Nights future-proofing of the single player RPG. And crucially, I just want to see whether me and SWTOR can be friends on a budget.

I’ve tentatively plumped for the Sith Inquisitor, beginning what is in effect one of several BioWare games in co-existence, and been thoroughly impressed. The ‘Evil’ option in Western RPGs has nearly always meant cartoon cruelty, a path motivated by pantomime cackles rather than greed, self-preservation, or anything else recognisable from our own world. SWTOR’s insistence that players are allowed to be proper Sith, however, more-or-less forced its developers to do something about that.

The Sith Inquisitor’s story, then, is one of morality in the workplace. It asks: Can you really justify careerism in a world of institutionalised evil? Or will you do your bit to make things better, little-by-little, while keeping up appearances for your masters? It’s clever stuff thus far, as inventive and thematically coherent as anything BioWare has put its name to since the original KOTOR.

And then I walk out into the blistering heat of Korriban, and see a duel break out on the steps of the Sith Academy. SWTOR isn’t the best MMO, but its numerous single player stories are the better for the existence of other people.

As for the 25% less XP, restricted access and whatnot? I’ve barely given it a thought. I’ll let you know how it goes. While still very much in development, playing a really early build, and not being exactly a game yet, I’ve been really taken withDukope’s Papers, Please. It puts you in the uncomfortable shoes of an immigration inspector at a border control point, checking the validity of travellers’ documents, looking for discrepancies; after all, any one of those that appear before your booth could be a smuggler, spy, or terrorist, threatening the stability of your war-torn dystopian nation of Arstotzka.

The play is currently extremely simple, an applicant appears before your booth presenting you with documents – passports, visa documents, references, etc – and you must search them for points of difference; does their date of birth match across all the papers, do they resemble their photo, do they look much heavier than what their passport states? Find a discrepancy and you’ve found cause enough to either deny their passage or investigate further.

The build I’m playing doesn’t have the interrogation function available but in his blog updates Dukope’s showing off that once you find reason to interrogate you can find further reason to doubt, leading you then to search, detain, or fingerprint suspects.

Part of the reason I’m so drawn to the game is its setting: games don’t have you play a character who sits in a booth all day doing what, from the outside, appears to be mundane work. Yet, Dukope has embraced it and found a way to make it compelling, he’s making you do actual detective work. It’s not like in Arkham games with theirdetective mode, here you’re left to spot the differences yourself and, I hope in later builds, hear about the repercussions of mistakenly letting through an unsavoury type.