This week’s playlist is a ragtag bunch. We’ve Jeremy playing Forza Horizon on a *pugh* console *pugh* and calling for its release on PC; Steve’s sent word from San Francisco about how much better shooting ships in space is when listening to classical music; and Julian takes a spin with Dota 2 and finds that it doesn’t live up to its reputation. But in a good way.

I was never one of those somebodies who accused Forza of being staid, because it never was. The series has always been liquid and lucid where sims tend to be clumsy and intimidating – an ongoing technical pipedream for Turn 10 that, through the work of underappreciated tutorial and UI designers, turned out to be a terrific game too.

It turns out it could stand to have a little more heart, though. Forza Horizon sees a new engine installed in Turn 10’s perfect machine, seemingly bought from the now-defunct Test Drive’s junk sale. Leamington-based developers Playground Games have adjusted Forza’s perspective; not literally – who’d mess with that camera? – but instead lifting its eyes from the next corner and exhaust upgrade toward that titular Horizon. Playground have liberating the series’ catalogue of cars from their tracks and set them loose in a Colorado mostly evacuated for a massive music and motorsports festival.

It’s absurd – brilliantly so, with a soundtrack tuned to euphoria. The proliferation of drum ‘n’ bass seems particularly appropriate given the game’s ability to stride wide, Burnout-style highs while offering hundreds of granular, gear-change victories gleaned from Gran Turismo.

Like Dance Central, it sometimes tries a tad too hard to be hip and rad and words it shouldn’t even be using if it wants to be halfway convincingly cool. Every now and again you’ll spot two young things taking a selfie in a waterfall on a loading screen and roll your eyes. But like Dance Central, you’ll forgive it every time because it’ll increase your fistpump-per-minute rate a hundredfold.

Also like Dance Central, unfortunately, Forza Horizon brings nothing to the PC but sadfaces. This is the part where I implore you to fill those newly-exercised fists with placards and pump them in the direction of Phils Spencer and Harrison, who in all their Xbox One-induced excitement seem to have forgotten that their remit covers Games for Windows too.

Flotilla is a turn-based space strategy game by Blendo Games, the people behind the spaghettily narrated heist game Thirty Flights of Loving and Gravity Bone, which I sadly haven’t played and so cannot think of any adjectives for. Like every Blendo Game that I’ve played, it’s an artistic superforce, presented in the developer’s signature block-colour style, with basic 3D shapes just simple enough to report that they are indeed spaceships.

In practice it’s not at all complicated. You find certain powerups as you play that will make the top or bottom of your ship more resistant to damage, so pointing that side of your ship towards enemies is the principle strategy involved. Tactics are not what’s great about Flotilla, what’s great is that as your ships glide and twist and float and spit their crawling salvos through dull orange cosmos, Chopin’s elegant nocturnes play and everything on your screen is transposed into something absolutely beautiful and graceful.

Frozen Synapse is a better strategy game, and FTL has better and more impactful random events between missions (Flotilla does have psychic dogs and pirate chickens), but neither comes close to the sort of auto-poignancy you get from overlaying classical music on to large scale destruction. Flotilla is one classy bastard. 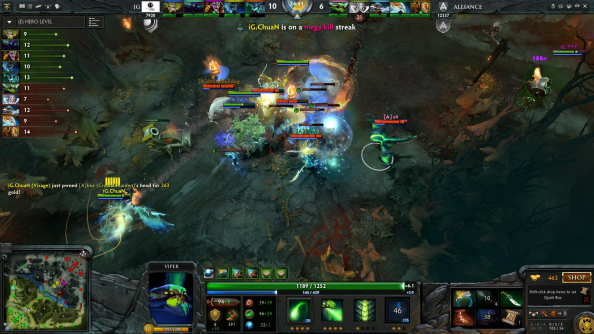 Saying Dota 2 is a complicated game with a steep learning curve is hardly departing from every other piece aimed at introducing people to the game ever written. They all go on about how it’s got more than a hundred heroes, each sporting four different abilities, hundreds of items which can be used to augment your abilities and role on the battlefield, and that there are a load of skills that need to be picked up – like last-hitting and pulling creeps out of the lanes. They all say this because it’s true. Dota 2 is all these things. It’s just that you don’t need to know that before you start playing. That’s not how you should introduce people to Dota, it’s off-putting.

This week’s been the first time I’ve ever spent any meaningful time with the game, trying out different heroes and roles on the battlefield. I’m still largely playing against bots, mainly because I’m scared of ruining a team of online random’s chances at winning a game and levelling up their profiles.

While it’s obvious from the little I’ve played that there is a huge amount of depth to the game and that I’m far from understanding it to a good level, I want to say ignore what people say about the game’s complexity. I’m naff at games, particularly complex ones – the only games I’ve managed to gain any ability at are straightforward things like Super Hexagon – and yet, despite this, I’m able to beat the bots in Dota 2. That is to say, as hard as Dota surely is online, you can jump into a game with bots knowing nothing about the game and have a fun time. Ignore the people ranting about the game’s challenge, you’ll rise to that when the opportunity presents itself but if you’re able to make it through the game’s tutorial you’ll be fine jumping into a bot match and you will enjoy yourself.

When people harp on about difficulty in games they may not realise they’re putting some people off playing something they’re perfectly capable of enjoying. How many potential players have decided not to play the excellent Dark Souls because they thought they wouldn’t last five minutes in it?

Dota 2 is free. If you’ve not yet played it, for whatever reason, install it and try it. You will be better than me and you may find something you really enjoy. That’s the only introduction you need. You’ll find your feet quickly enough.