This week’s playlist may seem light on entries but we’ve gone for something a little new. Jeremy and Jules have been playing Card Hunter of late and want to get across something of why it’s so bloody addictive.

Tim’s also been giving in to addiction. He’s back on WoW.

Everyone should have a comfort game. The equivalent of an old pair of slippers. Mine is World of Warcraft. Thanks to real-life commitments: a family, this website, and everything that comes with it, I’ve missed most of Mists of Pandaria – until this week I was languishing at level 86, having barely scratched the surface of the first zone. Until this week.

The second: I really love WoW. I love the places, I love the gentle sense of humour and pride it has. I love the slow and permanent sense of progress WoW at the high end gives you. But most of all, I love the way my class (feral druid) plays. I love his burst savagery; where you conserve cooldowns and buffs for just the right moment. And I love the fact that he can now turn into a deer.

The third: holy shit these pet battles are pointless and entirely compelling.

I play on Steamwheedle Cartel in the EU. Come and look me up. I’m Teem. 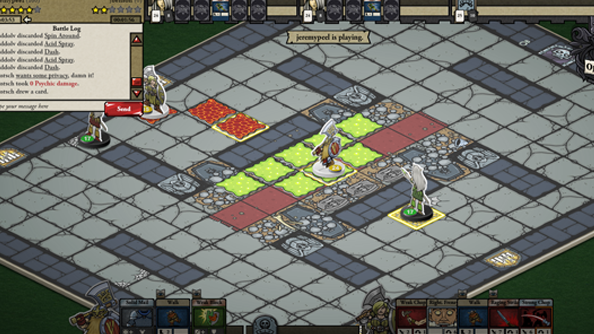 Jules: Jeremy and I’ve been in the Card Hunter beta for a few months now and are both convinced it’s pretty ace. It’s a collectible card game that has its roots deep into D&D. The multiplayer sees you each command three heroes as you try and be the first to six victory points. You can score points in two ways: holding the most victory tiles at the end of each round gets you one point and killing another hero gets you two.

My first mistake in playing against Jeremy was going into a match with a new deck of cards. I’d never played with my team of dwarves before so on the first round of draws I pulled a set of traits I’d never seen before.

Traits are cards that you have to play as soon as they enter your hand. Often they can be quite good, increasing your damage or giving you a free block. Mine was not. Two of my heroes drew blind rage. It deals damage to my heroes for every attack card in their hand at the end of the round. All my attack cards are melee and so I won’t be able to clear them from my hand until I can get into close range with Jeremy.

That was when I noticed my dwarves second drawback. They’re short fellas. They can’t walk far. By the end of the first round I’d barely been able to advance my dwarves up the board. Both the heroes afflicted by blind rage had two attack cards apiece, meaning four damage dealt to each before Jeremy’s even let off a shot.

Jeremy: I bloody hate dwarves. Well. Hum. I used to pick them, actually, as my fantasy RPG alter-egos – but perhaps a couple of hundred hours watching my Baldur’s Gate avatar not quite manage to keep pace with his party is responsible for the grim pleasure I’m taking in watching Julian’s sorry footsoldiers plod across the map.

And are they… are they bleeding, already? Wow. The dwarves are limping under the influence of a truly vicious Trait, which should be very good news to me. But I know this game, and I know what that means: for every willingly endured albatross, an equally-powered payoff. Julian’s got some really serious attack cards up his stubby sleeves.

Jules: This less than stellar start has given Jeremy time to move his fleet footed elves all over the board. One of them’s already near a victory tile. If he can control those then he’ll be getting a steady stream of victory points while I’m still trudging up the board.

I use all the movement cards in my deck that I can. Still, I’ve not got a single one of my heroes near any of the victory tiles.

Luckily, one of my cards lets my dwarf cast a spell on an ally, causing them to draw two new cards. I’ve my fingers-crossed for some new movement cards.

I draw two more attack cards. And, because the dwarf who drew has blind rage that means another four damage at the end of the turn, on top of the four damage that’s to be dealt by the other two attack cards he was already holding.

Jeremy: Maths! Lovely, lovely maths, working to defeat my enemies while I’m idly scrolling across the board. I’ve played this one before, and know it can work to my team’s advantage. I resolve to take the rightmost of the three victory squares and sequester my otherwise vulnerable elf there with a moat of fire and acid pits.

Fire and acid pits are my speciality – I can summon them in abundance. I take a moment to relish the knowledge that Jules hates this fact.

Jules: I hate fire pits. He can deny squares, block by approach and sap away my (admittedly large) health.

But I think I might be able to close the gap at last. While Jeremy was taking his turn I realised I have some attack cards that let me lunge forwards, they’re meant to be for chasing opponents but I don’t have to be in range of an enemy to use it. I just found myself some extra movement cards.

I walk my dwarf forwards down the centre aisle of the map and then lunge him forward twice. One of Jeremy’s elves is just two squares away.

I end the round with none of my dwarves quite in position but next turn will be different.

Jeremy: Gosh, if all this lunging doesn’t make me uncomfortable. I have my two unsequestered elves skip rather more daintily about the map’s centre aisle and begin knocking chips off those damn dwarves with long range spells.

I start to realise what Jules’ blind rage trait has done. Slowly deprived of his health and encouraged to dispose of his attack cards as quickly as possible, he’s taken on the behaviour of his beardy wards. He’s become a barbarian. And he’s frothing now just a few squares away.

I cover the middle victory square in acid – more out of fear than anything else.

Jules: I’m in a bit of a bind. Between blind rage and the two elves taking pot shots at me with ranged lightning spells, lava pits, and pools of acid, my front most dwarf has been sapped of health. There’s no way I can both close the distance to Jeremy’s elves and hit them because they’re just too fast, but, at the rate he’s picking up victory points by his control of the rightmost victory tile, I won’t be able to move my other dwarves into position in time. He’ll win the game unless I can do something.

I place my beaten and bruised dwarf on top of the centre victory tile. So long as neither team has a majority control of the tiles then neither of us score. I’m denying him points. I’m also now standing in a pool of acid.

Jeremy: Doing my utmost to ignore the fruity aroma of sizzling, hairy feet, I push my middle elf forward to put Jules’ unluckiest warrior out of his misery. Unfortunately, that turns out to be about all I can do. I’ve won back the centre square, but have left my wizard exposed to close-quarters counterattack – a sphere where Jules can finally bring his dinner lady arms to bear.

Jules: Finally. Finally I can have a dwarf do what dwarves do best. Make elves into piles of meat with pointy ears on top. I move one of my two remaining dwarves into range of the elf that just dispatched the fella who was enjoying a nice calming acid bath. I smack him once, twice, and into the nether. Picking up two victory points and regaining control of the victory tile. Jeremy controls the right. I control the centre. It’s all to play for on the left.

It’ll be tight. My leftie dwarf has taken hits from lava, acid, blind rage, and, while still pretty tough, is only two hits from death. I need to get him in close to Jeremy’s elf or I’m done for.

He needs one point to win but if I can kill his elf that’s not tied up on the right’s victory tile then I can take majority control of the board and win by sheer attrition.

Jeremy: Sometimes God, or whoever it is who assembles starter decks, places the right card in your hand. This one can be used to fling an electric bolt up to six squares – easily enough to catch up with Jules’ weakest dwarf. Deck God clearly isn’t doing his bit for my opponent, however, because the dwarf has no armour cards in his hand to block the blow. The poor, blackened bugger falls a short distance to earth and expends two victory points – more than enough to bring the match to a close in my favour.