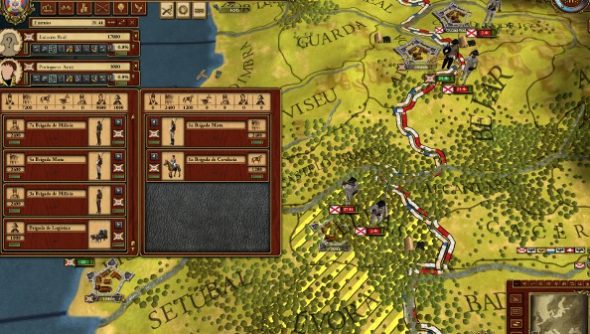 It’s Sunday, trying to capitalise on the vestiges of last nights drugs you turn to games for something to spark your brain’s few remaining synapses. Gash darn it, though, you seem to have lost the ability to choose what to play. Luckily for you, we’re here to help. This is what we’ve been using to artificially stimulate our brains for the past week.

Rob: March of the Eagles

The spirit of Paradox Con lives on in our hearts. Our black, twisted, malevolent hearts. For the last week, I’ve been trying to disembowel Joe Robinson’s Prussia while spitting a nonstop stream of profanity-laced invective at Paul’s annoyingly plucky Britons. Then we all have brief interludes where we feign understanding any sympathy, painting canvases with our lies that depict a peaceful Europe working in concert against some third-party. Then we turn around and betray each other as soon as is convenient.

I’m not sure March of the Eagles holds together as a grand strategy game. It’s really a wargame that just happens to utilize Paradox’s Clausewitz engine. It has rough edges that really feel very much like I’m playing something more akin to a mod than a fully-developed strategy game. Still, it’s simplicity and emphasis on confrontation and betrayal makes it a terrific multiplayer game. There is just enough downtime to allow frantic plotting, and then the campaign season heats up and everyone is at each other’s throats. I’m also pleased at how long it takes to truly erode another power. While Prussia might be down for the count by now, Austria, the Ottomans, and Sweden have all recovered from various hammer blows.

The result is a game that favors swift decisive campaigns, and prudent acceptance of defeat. Nobody is fighting to the death so much as fighting to either incrementally improve his position, or escape a trap with the least amount of damage possible. Having these kind of dynamic diplomatic relationships is a hard thing to pull off, and March of the Eagles has given players lots of incentive to play along. It’s been a wonderful war! Black Ops got a lorra stick a couple of years ago for its first mission, a Castro-chase caper which could be completed without the downing of a single tango. But frankly, Modern Warfare’s first outing is much the same – a chrome-and-moonlight boat boarding which asks you to call upon none of the skills you’ve just learned back at camp in Herefordshire. After landing, you’re no less than 15 minutes of limply trailing your squad away from the game literally telling you to jump. And you do it, and you let the man from the insurance ads pulls you aboard the chopper, and the ship sinks behind you, and it feels good.

It’s what happens next that changed things, though. Imagine it’s 2007. As you chatter excitedly to the friend next to you about what’s just transpired – swapping theories about the endless, Gandalfian series veteran Captain Price, now 95 years old at the very least – it becomes apparent that the screen that tells you how many headshots you didn’t get isn’t coming. Instead, via a beepy satellite zoom sequence that looks a little silly post-Zero Dark Thirty, you’re seamlessly transported to the Middle East and plonked behind the eyes of a doomed prince as he’s driven through civil war-wracked streets to his execution.

Like Half-Life’s famous opening, it’s an elaborate credits sequence – this one juxtaposed with the ascension speech of a rising despot. And as the final shot rings out, the names that have been cascading down the screen for the last five minutes gain new significance. You’ve witnessed the birth of a self-assured directorial voice.

That was before No Russian – before it became apparent that Infinity Ward’s audacity sometimes exceeded their best judgement. But for a while there in 2007, and even now in 2013, Modern Warfare is special – the sort of special that sells folk on video games. Amen to that. The magic happens after midnight, when the chat and banter dies down, and all that’s left is three men, shooting at baddies.

I’ve been struggling with Borderlands for a long time. I wanted to love the first so hard: it’s everything in a game I love. Guns, experience points, and a sense of exploration. But it didn’t work: it felt like a shell of a game – where the RPG mechanics felt like they were replacing, rather than enhancing the appeal. For me, RPG’s work best when the progression is tied to a strong story. Borderlands just didn’t seem to bother.

Borderlands 2 is better. There’s more going on for a start – characters show up in interesting ways, the baddie is fun, and that feel of a world gradually being revealed through plot development and exploration is very real.

But it still wasn’t clicking. Despite the bluster and comedy, despite the raw dopamine appeal of talent trees and badass points and endless new guns, I didn’t get it.

That’s because I was playing on my own.

It turns out, Borderlands wasn’t meant to be ever played solo. Instead, play it in a group, and you realise it’s kind of excellent. We spent the first two hours rushing the Minecraft level to equip ourselves with (entirely cosmetic and pointless Minecraft heads). Then, we ploughed into the campaign. At first, it was pure banter – a chance to connect and chat with friends I’d missed. But as the evening wore on, that conversation gradually ceased; replaced with the curt responses of a hardened team doing their job.

I kind of love it. But I’m never playing a Borderlands game solo again. Recently, I’ve shied away from multiplayer shooters, it all seems a little too aggressive for my tastes. Lots of swearing and ranting, not much actual play together. Natural Selection 2 is different, wonderfully so. Your teammates chat – usually at least three of whom will have headsets and so will be vocally communicating – they will plan, and they will help you. In my first game I had a commander telling me how I could be of most use to the team, telling me where to go and provide cover, or what to help build.

And, because we were planning, it felt empowering to play as a group in a way that the random elements that compose a team in other games, like Battlefield, doesn’t.

At one point, I was part of a small team of marines who were ordered to assault a part of the opposing team’s, the aliens, base. They’d expanded into a room we’d controlled minutes before and we were posing as a counter-attack. Drawing as many of the enemy to our location as we could manage before pulling back. All the while another small two-man team had sneaked into the alien’s territory from the other side of the map and found their way to the hive room. Their mission was to plant a portal gate that was linked back to our home spawn, allowing us all to jump into the enemy hive.

We could hear the infiltration team’s progress over the voice chat. It was a tense few minutes as we heard of barely avoided aliens that were running from the hive to our position at the distraction attack. Then, when they managed to plant the gate we turned tail and ran to the nearest portal.

The shift in play tone was thrilling, going from wall-to-wall alien carnage to being the last in a line of marines sneaking into a hive room where the walls are streaked with foreign bio-matter was a welcome change of pace.

Taking up position about the bulging hive we all opened up at the same time, destroying the objective before the enemy knew what was going on.

It’s a lesson to other developers, integrate voice well into your multiplayer and you’ll create a space for a much more involving and exciting game. That puts some pressure on you guys too, mind; buy a mic, today.

{"schema":{"page":{"content":{"headline":"The Weekly Playlist: the one where Tim learns to play with others and Jeremy sees Infinity Ward set the tone","type":"news","category":"march-of-the-eagles"},"user":{"loginstatus":false},"game":{"publisher":"Paradox Interactive","genre":"Simulation","title":"March of the Eagles","genres":["Simulation","Strategy Gamer"]}}}}