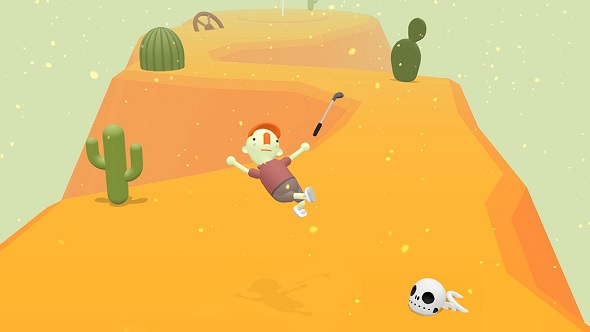 I am not a fan of golf. Tim Garbos, co-founder and creative director of Triband, is also not a fan of golf. We immediately hit it off during a GDC demonstration of the studio’s new game, What the Golf? – in more ways than one (that’s a golf joke, by the way).

Want more silly golf games you can play on PC? We have a bunch of ’em.

Despite his distaste for the world’s second-most-boring sport, Garbos and his team initially tried to make a more traditional golf game, before quickly realising that, yes, golf is quite dull. In response, the project shifted to something more disruptive, a mischievous deviation from the traditional sport that is, well, fun.

The finished game will feature an overworld map with various styles of golf squirreled away across its various acres, but today’s demo is a supercut of 20 levels. It starts simply enough – I point the power meter towards the hole and hold a button to decide how hard to hit the ball. You only need to hit the flag pole to win, which I do on my first shot. In the next level, it is my golf club rather than the ball that flies across the course. Still, I hit the flagpole in a couple of awkward physics-enabled shuffles. Later, I smash the piece of earth around a hole into a trench dug into the shape of the number one. It is an obvious joke but a very good one.

The plan is to have a couple of hundred courses ready for the final game, which will release late summer this year. Garbos and his team have already rejected around the same number of ideas too, including an initial attempt at a text adventure spin on golf that isn’t quite working yet. It may yet be reinstated if they can hone the formula, however. 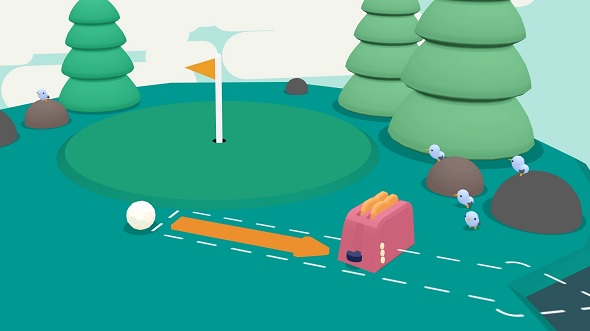 It is a brilliant, properly funny spin on the sport that evokes the dark, manic silliness of Katamari Damacy and manages to consistently defy your expectations. It is crazy golf that comes with none of the crushing disappointment so often associated with actualcrazy golf.

Garbos asserts that every game can be turned into golf and asks for a suggestion to add to their ideas list. I, of course, request Rainbow Six Siege. “Sure,” he says, “Siege is pretty much golf already.”

I can’t wait to be the friendly last ball standing.