I’m just off the edge of the green. I tweak my aim, adjust my swing, and take my shot. My golf ball cannons past the trio of cats that sit lazily on the course and hits the flag. A hole in one – so far, so good. Hmm, What the Golf? seems like an ordinary enough golf game to me.

But that’s just the tutorial – now I’m a lot further down the fairway, the chance of repeating my success seems unlikely. Not to be deterred, however, I start again. I take aim, set my shot to full power, and watch as the figure on the screen pivots to raise his club behind his head.

As I release, the scrunched up concentration of my face vanishes, it instead stretching to express my surprise. It’s the only reaction I can muster as my little golfer ragdolls chaotically across the map, leaving both club and ball far behind, eventually coming to a stop in a crumpled heap about halfway to the flag.

What the Golf? is billed as an anti-golf game – it’s for people who don’t like golf. It takes ideas about the genre that you’ve seen before, whether from EA’s realistic PGA titles or any number of online crazy golf games, and adds a key ingredient. Misdirection. 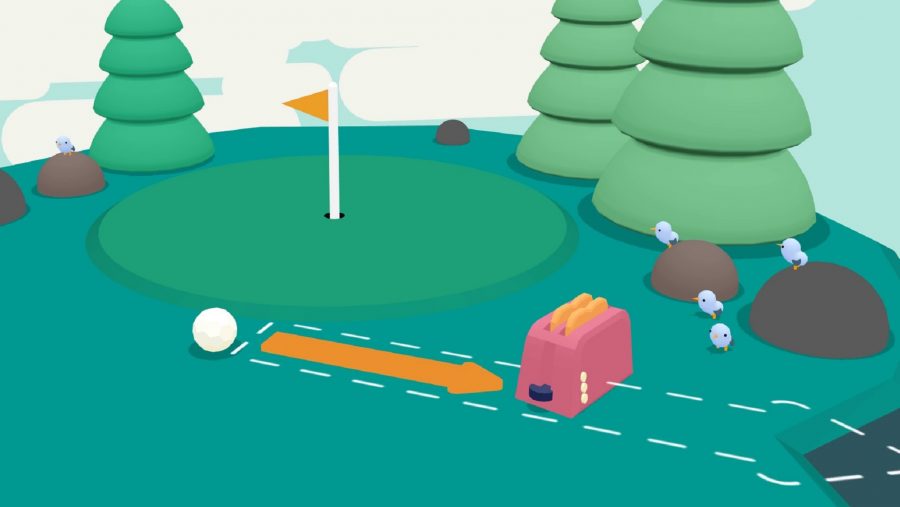 For the most part, What the Golf? is immediately recognisable. Aim the golf ball at the flag, drag your mouse to set the power of your swing, let go. Then try to do it all in as few attempts as possible. But this is only the setup – which is made deliberately plain, even boring – the platform from which a number of absurd jokes are swung at you, subverting your expectations for the sake of a punchline.

In one level I have to aim a football at a goal and hit it in. The next scenario is a development of the first, but this time with a second goal set up behind the ball. As I take my shot, it’s the goal, not the ball, that flies forward, colliding with the other goal and allowing me to complete the level. More or less every time something like this happens it elicits a laugh from those watching the demo around me at IndieCade Europe. But, despite these good-natured reactions, few of the scenarios warrant a second go.

While the 20 or so levels I play in my demo are heavy on experience and shock factor, there’s little more on offer when it comes to the game itself. My scores are never tallied, so it feels as though there’s nothing to compete against. Once I play a hole, there’s no need to do it again, to try and get better at it.

On several occasions, an idea is presented in one level, developed further in another, and then dropped as quickly as it’s introduced. This offers little opportunity to improve at a concept, meaning the game lives and dies on the strength of its jokes alone. They’re very good, don’t get me wrong, but the procession of one-shot punchlines results in below par longevity. There are a couple of more complex scenarios, but a low score on these often feel like they come down to luck rather than skill.

As well as being a sport parody, What the Golf? references its indie peers, too. In one level I have to dodge past gun-toting enemies whose bullets only move as I do – a grin-inducing homage to slow-mo FPS Superhot. Other holes see me travel through dimensions in a nod to Portal, and elsewhere I see an adaptation of Clustertruck, the chaotic game about jumping across moving traffic.

These levels, often far more complex than those that parody golf, show how much What the Golf? has to offer when its developer takes a concept that little bit further. There’s more to see and more ideas to explore, and these are the kind of levels I want to tackle more than once. Here’s hoping there’s plenty more where they came from.