You can accomplish a lot in seven years. Eric Van Heest calculates he could have played 70 long games instead of doing what he did, which was to create a free program that makes playing 13 very old games vastly more accessible to modern audiences.

Working nights and weekends – some 3,500 hours of endless testing, playing, and coding – he pushed his completionist tendencies to the brink and created his “little program,” Where Are We?, a one-of-a-kind moonlight he swears has helped him in his job as a corporate developer. The Windows application functions like a benign ‘game trainer’ (a kind of cheating program) that can spy on the RAM contents of a surprisingly long list of old first-person RPGs as they run in windowed mode on DOS Box, like the GOG.com versions can.

While the naughty trainers tinker with values, turning up health or money or skills, Where Are We? uses the information to create an augmented interface more welcome to anyone who has played an RPG since the mid-90s. The reskin pushes the hidden complexity of the games to the surface while also making them snappier and more addictive, despite the spreadsheet-like appearance.

In other words, Where Are We? grants games like Wizardry a modern player’s wishes: a functional automap, real quests, a way to easily compare stats, and fewer trips to the manual. This may be the best time since the 1980s to play an RPG from the 1980s. 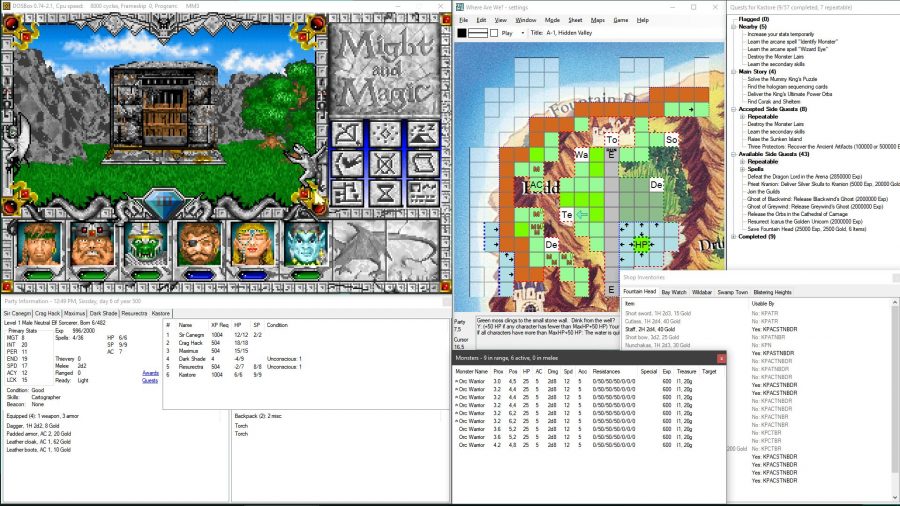 Unlike clumsy auto-mapping programs that stumble into the dark, Van Heest’s system is based on an exhaustive knowledge base and only shows you as much information as you want to know. Its FAQ-like walkthrough mode reveals all, and another fog-of-war one forces you to make your own discoveries. The automap, which incorporates scans of some of the old fold-out versions, isn’t the only feature: There are tidy, if not glamorous, windows detailing the party’s inventory, spells, stats, combat encounters, various worldwide variables, and quests.

The supported early first-person classics ranging from 1980 to 1993 – Might and Magic 1-5, Wizardry 1-5, and Bard’s Tale 1-3 – are difficult to revisit and have always necessitated some kind of paper mapping, with a few exceptions. And besides, comparing two fantasy weapons without the aid of a UI full of tooltips is a forgotten skill, like editing a config.sys file. The world graphics can be repetitive, stacking up 2D images in a way that makes Wolfenstein 3D look like Unreal. You can easily get lost, yet the games never take themselves too seriously and have remained fun and surprising on their own terms. 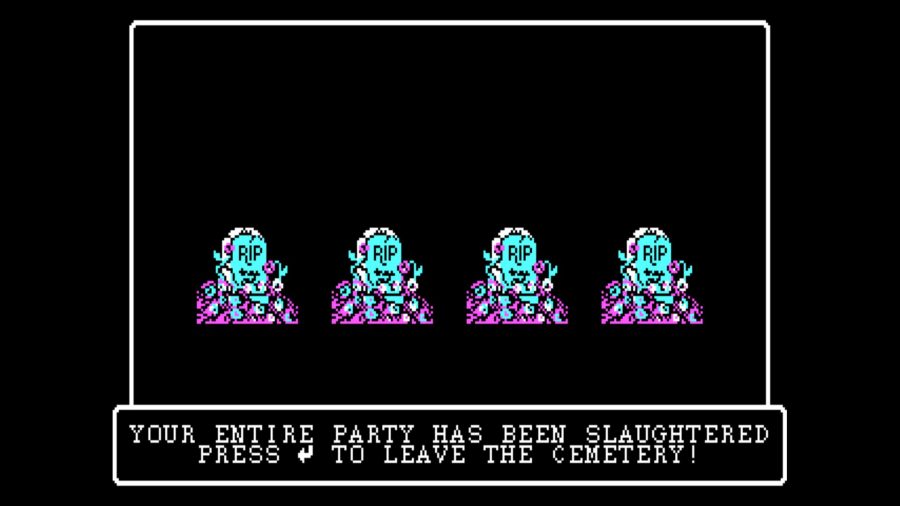 In the world of old first-person RPGs, Eric Van Heest has already wrestled many of the major players to the floor: Wizardry, Might and Magic, Bard’s Tale. The remaining heavy hitters are Eye of the Beholder 1-2, which he’s working on, and the Dungeon Master series, which he’s tempted to dive into as well.

During development, ensuring that each game played nice with Where Are We? and was reliable brought its own nest of issues. The bright and colourful Might and Magic III featured devilish enemies that could close in on you and hunt you, while in the first two games, monsters attacked as if they’d fallen out of the sky. There was always something, and to compound the long hours of development, Van Heest played and replayed each game to breach its particular inner sanctums. Today, he can whip through the first Might and Magic in an evening. “I know almost every byte of it,” he says.

It was Might and Magic VI that first piqued his interest in the older games, so he made a basic digital graph paper-type program to manually map the first game as he explored it. He distributed the program to a few friends interested in Might and Magic, and one remarked, “It’s neat, but it would be great if it could show you where you were.”

“It went downhill from there,” Van Heest says, laughing. 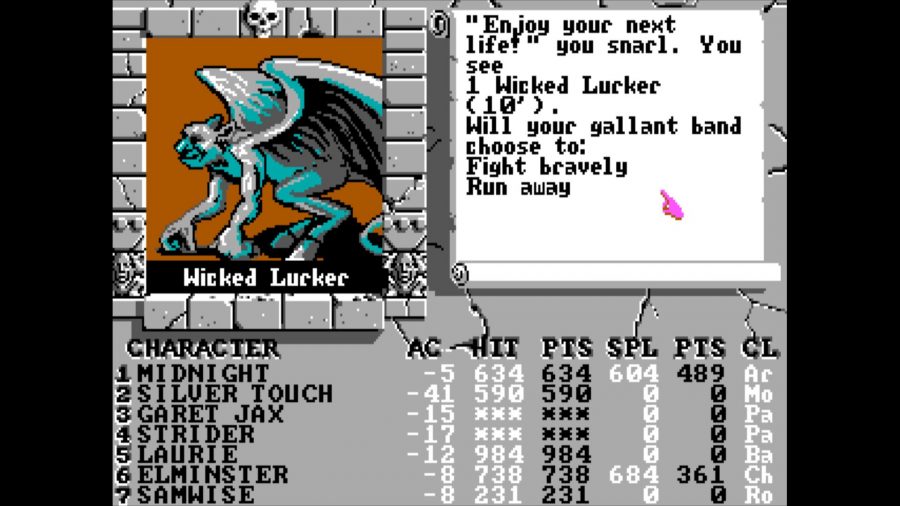 He started serious work in 2012 and needed no great magic to peer into a computer’s memory – he just had to make sense of what he found there. While some game features he tried to track clicked, others drove him up the wall. For whatever reason, detecting when the player had cast a spell, and what spell it was, defeated him time and again. Just when he thought he had the correct list of memory locations, a pixelated fireball would zip by undetected. After another long struggle, he nearly gave up on decoding the Bard’s Tale inventory system, which had proven nearly Impenetrable.

The quests themselves had to be extracted from a maze of code and named, to bring the games up to modern standards. “They don’t call them quests,” he says. “They don’t put much on the map. They don’t have a quest book.” 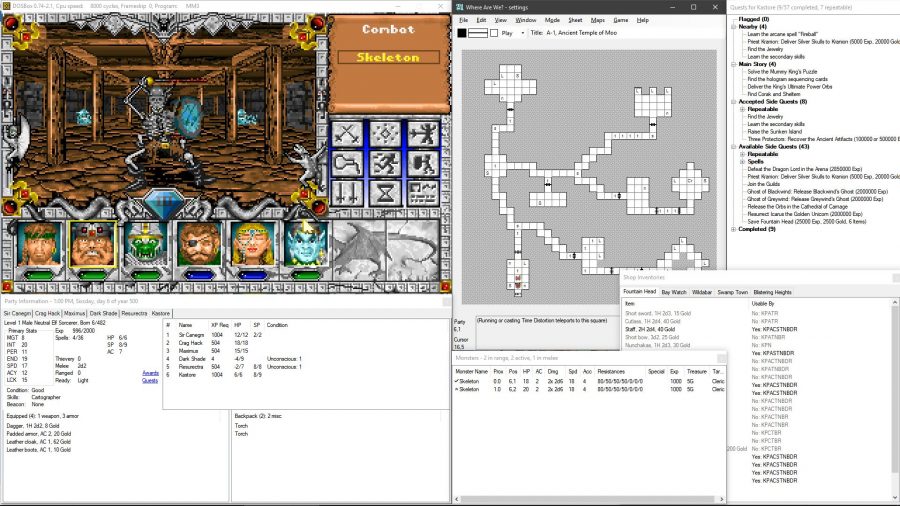 The current version of Where Are We?, 1.1, is free to download here, along with extensive documentation. You can pick up most of the games it supports, such as Might and Magic 1-6, on GOG.com. Van Heest lives in Boulder, Colorado, and works for German software giant SAP, writing more business-like, button-down software – nothing involving evil candles or cardboard mountains.

But never say never. “Ultima could use some help,” he says.