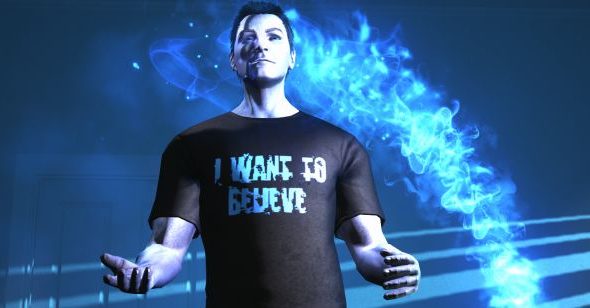 I met with Funcom at GamesCom. They’d been stashed away in a corner of the EA booth and they seemed surprised when Adam Smith of RockPaperShotgun and I insisted we wanted to see them. The guys just looked tired and, for clever, optimistic, friendly guys… down.

Today, hearing that the company has decided to make many, many redundancies, I’m tremendously upset. The Secret World is the best MMO to come along for a long time. The team they’ve assembled – Ragnar Torquist, Joel Bylos, Martin Bruusgaard and the rest – just shouts dry wit, adventurous mechanics and a fundamental humanity.

The Secret World was mould-breaking in so many ways. Firstly, and most importantly, it never talked down to its players. Mingling complicated concepts, obscure history and Whedon-esque gallows humour, it treated its players as if they wanted to hear the story, as if they wanted to know what the big conspiracy was – and the players found that they did. Because it was a twisty, funny, well-told story.

Secondly, it was the first MMO I’ve played where the acting fitted the speech and the writing. Having seen Funcom’s mo-cap studio in action, I can tell you that they’ve made themselves experts in putting acting into games. Thanks to the progressive dross of so many other games our hand might instinctively stretch to the escape key every time a cut-scene comes on – but in The Secret World the story, the humour and the acting restrains you. Behind both of these elements is the superb writing. Of course, your character is a silent protagonist – but the cast will tease, rant and prod at him or her, spouting monologues drawn from mingled pop culture, conspiracy theory and every horror mythos under the sun. Go onto the Secret World forums – there are threads just about the writing, people throwing their favourite quotes at each other. From “Aren’t you a little short to be a Templar?” to “If I truly want to understand humanity, I need only read the comment section on YouTube” to the array of Smiths songs quotes in the London Templar hub. There are a million more but the beauty of most of them is that they need context – this wit is embedded in the world. “You’re just like every single character I’ve ever written – fucked from page one” says a reclusive author at the top of a lighthouse.

Indeed, the clever-clever investigative missions – the first real puzzle missions in an MMO – were supposed to be the element that Funcom most wanted to focus on, following the eulogistic community feedback. Even the fetch quests are a cut above, making you run through haunted schools or fairgrounds.

Now we’re not denying certain elements are uninspired. The combat is no worse than WoW or any of the other – but the room for specialisation within the classless system is huge; it’s the first game to learn from Planetside about letting your players play with their tools. The game doesn’t have enough variety of locales – Kingsmouth to the Savage Coast to Blue Mountain was too samey and turned off a lot of players – but the variety within those locales is huge. The 5-man dungeons were fun, but the template for these is pretty much established. The next update is planning to fix a whole bunch of these things. First, it introduces a new weapon – the rocket launcher – which has its whole own skill tree. Then it introduces a new area – Tokyo, the area from the games opening sequence – which is huge and stunning. Finally, it’s introducing ten-man raids – so that top-end players have more to do.

At GamesCom, the Funcom team seemed shell-shocked (and possibly hungover). One of their personable PRs (yes – they even have human PRs), Tor Egil Andersen, told me that they were retaining the players they had at the moment – that is, current players weren’t leaving, as they seem to be enjoying it. The problem for them seems to be getting people to sign up in the first place, probably because Guild Wars 2 is on the horizon, possibly because the pre-release buzz was so low. The Secret World is struggling because people didn’t understand it and so haven’t tried it – not because they don’t like it.

So here’s our call. Players; We know that Guild Wars 2 is going to be absorbing a lot of your time – but when you fancy a break, just TRY the secret world. You’ll like it. FunCom – do a buddy program, stat.