In a moment of madness last year, I bought a Surface Pro 2. I’m absurdly, insanely happy with my purchase. It’s quickly become my favourite computer, ever. It’s not the most powerful, by a long shot. It’s expensive (£1200! for a version with 8Gb RAM once you price in the cost of the keyboard). And it’s so brazenly different to what else is available, it’s clearly not the right PC for everyone. But it is the most flexible and unique bit of hardware I’ve ever used. I think, more than anything, it reminds me why I love PCs in of themselves.

I want to explain why.

Some hard truths: the desktops and laptops that you can buy on store shelves are invariably terrible. Laptops aren’t sold on quality; they’re sold to meet very thin margins. The stuff that matters: battery life, weight, responsive keyboards and trackpads) are inevitably compromised. It’s the same with desktops that you can buy: filled with crapware, or missing a GPU, or bundled with a keyboard that makes you wince.

In this market, it’s so weird to me that Microsoft (or Intel for that matter) never bothered building PCs. For whatever complicated business reasons, Microsoft left it to Dell, HP, Acer, and a legion of build your own enthusiasts to build the hardware. They were happy to build webcams, and keyboards, and mice and Xboxes and phones. But never actual PCs. Surely, you’d think, they’d at least build some. But no.

That changed last year, when Microsoft announced the Surface and Surface Pro tablets.

The Surface line are hybrid laptops and tablets. They are about the same size as an iPad, but with built in USB, DisplayPorts and MicroSD slots. They have touchscreens and webcams and a clever line of detachable keyboards. They’ve got a well-engineered kickstand at the back, that allows it to rest, screen angled up, ready to do work. Or play.

But there are significant differences. The basic Surface line use ARM derived processors, like the iPad. It looks like it’s running Windows, but it isn’t, really. It’s used a re-engineered version of Windows that can’t run legacy programs. It’s thinner, lighter, and has decent battery life, but can’t run XCOM or Civilization V.

The Surface Pro is different. It is a bit fatter and heavier, but comes with the full version of Windows 8, and a pretty high-end Intel i7 processor. It is a hell of a laptop, but squeezed into a tiny form factor. It weighs about a pound-an-a-half, a little bit more than the iPad 1. They have a pen, that can act as sort of a mouse replacement and let you doodle pictures of wangs during boring meetings. They have a pretty robust battery life: I can get 7 hours of battery life out of it (although a recently bodged update from Microsoft has knocked that back a little bit). But most importantly, it will run pretty much everything I throw at it. And more.

It’s that last point that I struggle to get my head around.

I can’t get over what a little beast this thing has turned out to be.

Usually, there’s always the caveat. “You know, don’t expect to be running Crysis on this thing.”

Except, no. This thing runs Crysis. And Rome 2. And Battlefield 4.

You might have to drop the detail down a little bit, but hey, here’s Rome 2, running in a coffee shop on a dinky little thing. 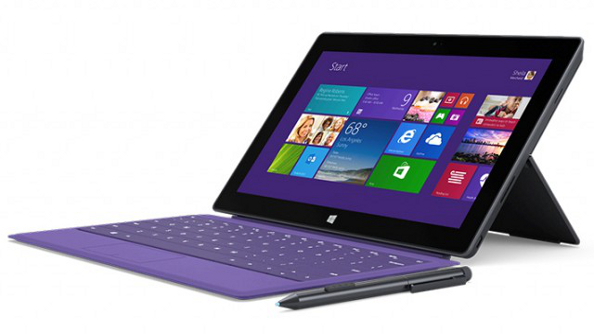 I don’t know what happened when I wasn’t looking, but suddenly, integrated graphics have gone from a joke to “huh”. I spent my first few days tinkering with it, trying to break it. But I’ve just about given up. It just works.

I think what has happened is that the games of the past five years have been broadly built to work on seven-eight year old technology. Even integrated graphics can outpace the GPU and CPU of an Xbox. Meanwhile, Intel have gradually been improving the graphics performance of their processors, as certain hardware manufacturers demand very, very high resolution screens in laptops.

So, we’ve reached a kind of sweet-spot, where the Haswell line within the Surface Pro 2 is powerful enough to deliver pretty great gaming performance most of the games you’d want to play. Meanwhile the graphics requirements for the most popular games: League of Legends, WoW, Dota 2, Counter-Strike and TF2, don’t even bother to stretch integrated GPUs.

There are caveats: the native resolution of the screen on the Surface Pro 2 is set at 1920×1080. But that’s 1920×1080 in a tiny 10” frame. In cases where games are running a little bit choppy, I’ve knocked them down to 720p to get more than acceptable results. There’s occasionally a little weirdness associated with that high resolution screen: there’s some trickery with scaling going on in Windows to make a 1080p desktop work at 10” that can occasionally throw some games into a panic.

But mostly, it just works.

And that opens some fun possibilities.

I’ve been using the Surface as a pre/proto PC for the living room: an HDMI lead into the back of the television lets me play quite a chunk of my Steam library from a sofa, helped by Big Picture Mode and an Xbox joypad adaptor. I’ve taken my Rome campaign to bed: using Steam’s cloud saving to invisibly replicate my saves from my desktop to the Surface. I’ve completed an entire Civ V campaign from the sofa, using the (excellent) touch controls Firaxis built into the game to tap and prod my way to a British victory.

I adore this sense of liberation: that PC games are slowly, quietly becoming portable. That I can fit The Banner Saga and Blur and Kerbal Space Program and Left 4 Dead 2 and Prison Architect and the vast and unmatched back catalogue of the PC into a tiny bag. I can play them anywhere.

It’s a weird time to be a PC gamer and user. There is a near constant background hum about how the PC’s core functions will eventually be replaced by a tablet. That iOS and Android will eat into and maybe supplant Windows. The Surface Pro is a brilliant, tiny, spectacular riposte.