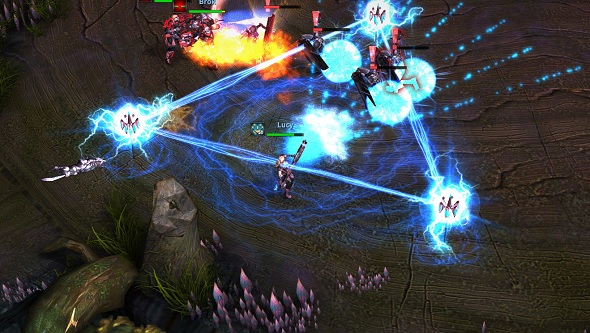 Since we last did a giveaway for the sci-fi MMORPG going by the name Wild Buster: Heroes of Titan, it has been released as a Steam Early Access title. So, rather than giving away keys that get you into a closed beta, we’re now able to give you keys for the Trial Version of the game.

Before we get into exactly what the Trial Version of the game gets you let’s quickly recap what Wild Buster is all about. It’s a hack-and-slasher all about chopping (and shooting) you way through hordes of aliens alongside your mates.

As well as quick reactions and precise attacks, you’ll want to make sure your team’s composition is equipped to deal with the threat you’re facing. There are currently 12 heroes for you to mix and match, which rangefrom a mech-suit engineer and a creature tamer, to a dual-blade assassin and a sniper. You can also be Duke Nukem or Serious Sam if you wish. All the heroes have two ultimates for you to utilise and are customisable with abilities, gear, mounts, and pets.

As the full game is available for a price on Early Access, the Trial Version limits what you get, given that you’re getting it for free. It includes four of the 12 heroes and gives you limited inventory space, but the full gameplay content is available to you still. But if you want to unlock new heroes and carry more equipment then you will need to purchase one of the DLC packages.

With that all said, let’s get you your key – all you have to do is complete one of the actions available in the widget below. Once you have it, you can redeem it on Steam – there are key redemption instructions below the widget if you need them.