Five years into Wildstar’s nine (nine!) year development, the team at Carbine Studios hit a wall. “We were making a pretty average MMO. It was a boring WoW clone, effectively,” says producer Stephen Frost. We looked at it and went, ‘this is not what we want to do.’”

The team hit the reset button. Half a decade’s worth of work was thrown out. “We wanted to make something different.”

The result is the first MMO I’ve felt that can actively improve on World of Warcraft. Maybe, even in some ways surpass it. 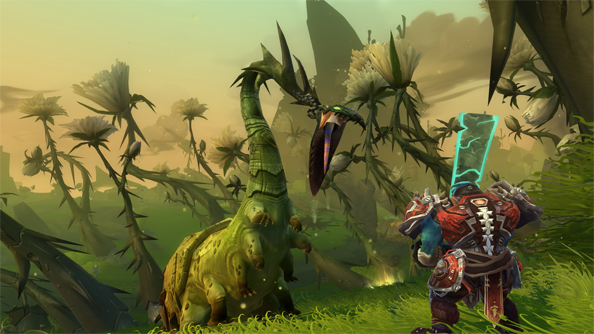 Wildstar is a science fiction MMO. It has a very familiar feel and structure: players quest against increasingly hard monsters in a relatively open world until they hit the level cap, (50) at which point they join together to raid, or enter the game’s competitive PvP modes. It looks, sounds and feels like the other big massively multiplayer games, but with one caveat.

Combat in an MMO is the game. Everything revolves around how you hurt the baddies. In World of Warcraft, and games like WoW, combat is mostly about single targets: about selecting an enemy and then using your array of skills to whittle down their healthbar. Combat is effectively about altering a database entry: as long as you’re in range, and have the target selected, you are mostly moving numbers downward.

Wildstar works a little bit differently. It feels like a hybrid of a third person action game, like Devil May Cry and MMOs, with a hint of a MOBA’s aimed skillshots. To fight, you don’t target enemies – you simply get in range and start punching. Anything caught in the blast radius is hurt; whether they’re your active target or not.

This has two important side effects. The first is that you can fire your skills at midair – you don’t have to select a target to apply a backstab, for instance. The second is that it doesn’t matter how many targets are within your blast radius: if they’re caught, they’ll suffer damage.

On my Stalker (Wildstar’s equivalent of a Rogue or Assassin) character, that immediately led to an interesting realisation. I’d sneak into position, quietly creep up behind a baddie, and then pounce. But I’d time that pounce so my backstab would hit two or more mobs – doing double or triple the damage. At that point, I’d be able to apply my stuns and debuffs to two or three, or occasionally four monsters – I was choosing to take risks to be more efficient, with the payoff that if I overstretched, I would die.

When playing as an Engineer: Wildstar’s mechanical pet and ranged tank class, my basic shotgun blast did differing damage according to where the target appeared on the blast radius projected on the ground. Similarly, my electric stun shot would only affect a narrow selection of targets that were caught in a thin strip.

It took some convincing before Carbine were ready to rethink such a fundamental part of MMO gaming. “There were people on the team,” says Stephen, “who actually said, ‘well WoW doesn’t do it like this, so maybe we shouldn’t do this.’” But Stephen points out that “just because World of Warcraft is the most successful game of all time, that doesn’t meant they were right 100% of the time.”

There are other, subtle ways Wildstar is taking aim at Blizzard’s beast. 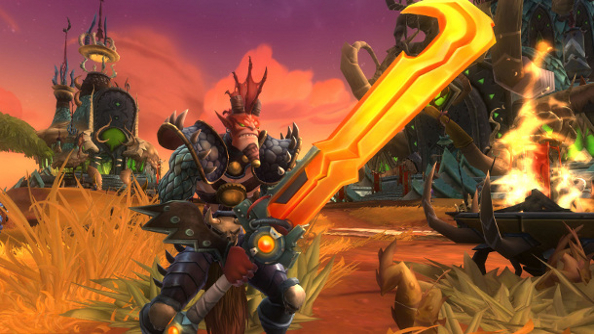 For one: Wildstar’s approach to raiding content contrasts sharply to Blizzard’s approach. In World of Warcraft, raids have been rethought: from content for the game’s elite, down to open ended accessible boss dungeons for every player. In WoW, every player can and should play raids. For Wildstar, Stephen throws down a gauntlet: “raids are for the one percent.”

Wildstar’s raiding structure is deliberately epic: they’re built for groups of 40 and 20 (Blizzard began making their raids for 40 players, but gradually scaled them down to groups from 10-25). Fights are deliberately hard: examples of bosses include a mechanical tank thing that destroys the floor in groups of hexagons. Successful groups will control the tank and his blasts to retain some room on the platform to fight and move. As Stephen shows a video of a group repeatedly wiping, he takes delight in noting that “we haven’t had many successful groups so far.”

PvP requires similar levels of dedication. Guilds and groups of players own what’s known as a “warplot”, a base that can be equipped with traps, guards and even captured boss monsters. Guilds can then fight eachother across facing warplots: the winner being the team that can invade the other’s base, eventually destroying the generator at the heart of their base. Again, Stephen shows a video, with two captured boss monsters on opposing sides, fighting each-other, egged on, buffed and healed by the two teams.

Wildstar is close: beta weekends are ongoing (watch our Facebook and Twitter for news of access) and players seem charmed by the game’s approach. It is an MMO for MMO players: it understands why MMOs are good and enjoyable, and improves upon them.

“I’ve been working on this game for three and a half years,” says Stephen. “I want people to play it.”

I think you should.