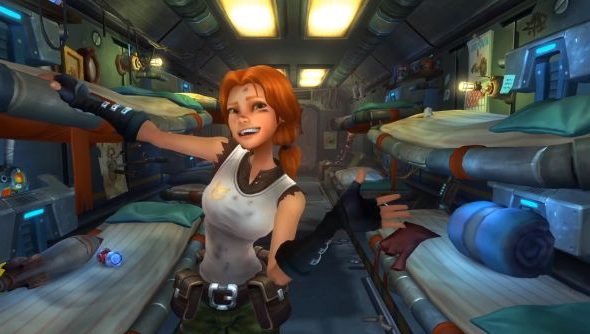 We’ve talked a couple of times to Carbine Studios’ Jeremy Gaffney in the last few months. He’s currently promoting his promising subscription MMO, Wildstar, and on each occasion he’s made the same broad point: in the massively-multiplayer market, things are not necessarily as they seem.

“Different games with different business models work in a very different fashion,” he said of his new game’s chances in a bustling field. “If you look at City of Heroes [which Gaffney produced] compared to Guild Wars, it looks like City of Heroes is a smaller game.

“And it is, fewer people play City of Heroes, they peaked out at – I don’t know the numbers – something like 200,000. But 200,000 subscribers paying $15 a month, if you do the math, that makes about as much money as selling 6 million boxes, if they last long enough.”

Gaffney cited a “couple of reasons” for Carbine’s decision to steer clear of free-to-play for Wildstar. Both lie in the “variability” of the payment model.

“There’s variability as a player because you don’t know if you’re going to get sucked in and pay $1,000 a month, because some people do. As a publisher it’s a juggling act because most the games I’ve seen end up devolving to the point that 1 or 2% of the players are paying $100 or more a month and they’re actually funding most of the free players, which can be up to 70 – 80% playing completely for free.

“As a publisher [that variabililty] can be distracting because when you’re making money you never know when that’s going to go away. As a player it’s distracting because generally you have a very different experience if you’re playing for free – and if not, then why the hell pay?

“So free-to-play’s not a magic bullet.”

Instead, Carbine have adopted an Eve-like business model: CREDD. Players can buy CREDD items for real-world money from the developers, and trade them with a second group of players for in-game gold. This second group can then cash in their CREDD for game time and, if they’re earning enough gold, play the game for free indefinitely.

“A bunch of games have done similar systems,” said Gaffney on the system’s inspiration. “Eve’s is probably the most popular and the best known. So many people don’t know what PLEX is and so it’s tough to describe. It’s such an efficient way of taking players that want to pay a lot, who want to put extra money in the game, and then that directly funds other players game time and so it’s a lot more direct.

“So essentially one set of players create their time, [another] use money to pay for the sub, and it’s a win-win and it pisses off gold farmers because it’s a legal source of trading gold with other players and so gets in the way of gold farmers.

Hear hear. But what do you make of Gaffney’s assessment of the MMO market? This is a man who’s been around since Asheron’s Call, so tread respectfully.