Wildstar’s PVP is fun and chaotic. I recently had the pleasure of playing in an grudge match between EU and US games journalists in one of Wildstars battlegrounds: Walatiki Temple. It’s a capture the flag map, except the flags are replaced with voodoo masks. Spoilers: we – the EU side – lost, but the match demonstrated the kind of tactics and moves you can expect from battlegrounds in Wildstar.

While it’s not particular daring in design, it works.

The map starts like most others: each team gathers behind a gate until the timer hits zero and it’s a mad dash for the first mask. Each team must capture five masks to win, but each team also starts out with a single mask in their base.

I was playing as a Stalker – a stealthy back-stabbing glass cannon – and while everyone else was going for the masks, I had something else in my sights: their base.

And I was going to steal it.

An infiltration made perfect sense for the Stalker. Running past the brawl in the middle of the map, I quietly slipped into their base and past their lone defender. One of the biggest changes to the Walatiki Temple map is the addition of an alternative entrance/exit to each base via a cave. That was my getaway plan.

As soon as the game announced my shenanigans, the defender beelined straight for me. Carrying a mask slows you and prevents you using movement skills. But there’s a speed buff at the end of the exit corridor.

You can watch the whole chase, and the whole game in this video below:

Wildstar telegraphs everything that happens on the battlefield. Enemy attacks show up as red, whereas ally abilities/heals show up as blue. It works like a treat when it’s a one-on-one or a couple of players in a light skirmish. The problems arise when you’ve got twenty players all spamming their abilities. The ground is littered with red and blue alike, and you have absolutely no idea where you should stand, especially if you’re a melee character.

I’m not exactly sure what I could suggest to alleviate this issue. It’s an information overload, but I can’t help but think the issue wouldn’t be solved by taking the telegraphs away. Maybe it’s something that will cause less confusion over time as players learn the classes abilities. 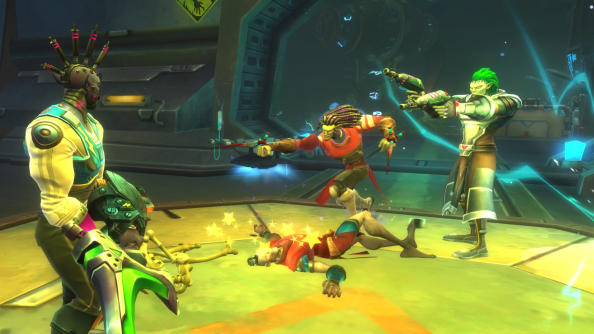 As the game drew close to its inevitable end I began to really get feel for the Stalkers strength in this map. Infiltration – especially with a partner in crime for support – was a no brainer, but they also excelled in taking down lone enemies and mask carriers. Wading in knee deep into the zerg for the mask spawns was a bad idea, and almost certainly led to a swift death.

Apart from the telegraph blitz that occurs in large teamfights, I was hard pressed to find anything wrong with Wildstars PVP. It plays it safe: it sticks with the holy trinity of tank, healer and dps. There’s no revolutionary thinking to be had here. It’s solid.

Why fix something that isn’t broken?