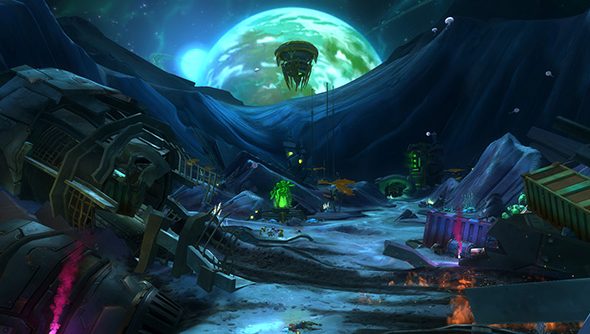 The folks at Carbine are dusting off their gym memberships, binning the cigarettes and running laps around their desks, so full of the spirit of renewal and optimism that the new year brings. They’re so inspired, in fact, that Mike Donatelli, WildStar’s product director, has just outlined the grand future for their MMO in 2015.

What can we expect? Well broadly speaking, they’re working on things that players really, really want, including more solo and group content, new shiphands, adventures and dungeons and customisation and loot and stuff.

More specifically, they’ve outlined the features to be included in their forthcoming update, The Protogames Initiative.

As well as making existing content more accessible to players who might not be able to get on board with features like the housing system and dungeon runs, Carbine are expanding on The Protogames Initiative by endowing it with a bunch of new features.

They Came From Fragment Zero! is a new level six shiphand that introduces new players to group play. A newly expanded Looking For Group tool will make it clearer which shiphands, adventures and dungeons are locked off or inaccessible to which players. And the 40-player, seven-boss dungeon Datascape is having its player requirement dropped down to 20, which should hopefully improve attendance.

Besides The Protogames Initiative update, Carbine are also promising more short-session content that provides meaningful loot to players who’ve only got half an hour or so to spare. Most interestingly, there’s talk of a new Contracts system that aims to provide players with “short, fun objectives” across all different kinds of WildStar content.

So giving better support for lower level and inexperienced players seems to be Carbine’s New Year’s resolution. You can read the full statement on the WildStar blog.