Wolfenstein: The New Order’s Frau Engel, a Nazi leader who runs the death camp which forms the backdrop for one of the game’s most harrowing segments, is unforgettable. She doesn’t linger in your mind the same way hero William “B.J.” Blazkowicz does – with his memorable one-liners and his heartfelt internal monologues. You remember Engel because of the gleeful way she embraces cruelty, and for that scene with the robot.

During a botched execution, the allies manage to seize control of a Nazi robot which grips onto her head and crushes it, rending her jaw from her face and shattering her teeth. After receiving the horrifying injury, Engel jumps up and shoves her face right into B.J.’s, blood dripping from her open wound, and tells him she will scour the Earth to find him. Wolfenstein II: The New Colossus sees her fulfilling this promise, doggedly searching for revenge on our hero throughout. Like B.J., she is driven and determined, but she is fueled by a different motive – a fanatical fascism that is indistinguishable from true evil.

Wolfenstein’s alternative history might seem far removed from the real-world atrocities that took place during WWII, but it still leaves you feeling raw. Frau Engel’s death camp is just one of the places where the parallels gnaw down to the bone. But Wolfenstein II cranks everything up, holding a mirror to our modern world, and showing how these hateful ideals can take root among apparently normal members of society. 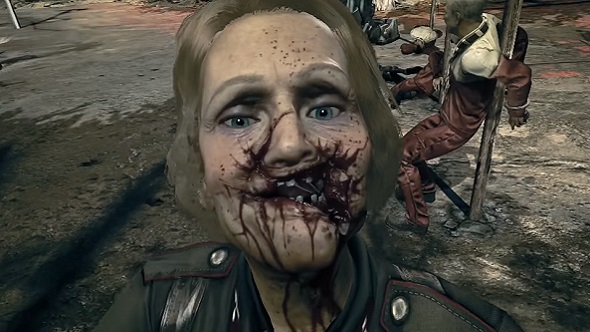 When actress Nina Franoszek first got the role of Frau Engel in The New Order, the fact that this very same evil exists in our world, that these atrocities actually took place during WWII, made it hard for her to connect with her character. “I did research and found the same kind of evilness in concentration camp guards like Irma Grese and Ilse Koch, but it didn’t really help me to find Frau Engel’s character,” Franoszek remembers. “The atrocities of the Nazis were so unspeakable that they blocked my access to her.”

Franoszek was struggling to find what drives a person to commit these acts, to live in this violent, intolerant way. Then, during rehearsals, she had a breakthrough. “There was a moment where I just threw myself into one brutal action and experienced an unbelievable ‘high’ – a power rush that gave me a god-like feeling, which was the turning point,” she explains. “From that moment on it was an amazing ride. I was allowed to act out things I never thought I’d be capable of and explore the abyss of human nature on a very deep level.

“I finally understood the core of the character, her hatred and violence and why people did what they did in that time, and why it still happens. Being power drunk is as highly addictive, compelling and devastating as any other addiction. It makes you inhuman and always hungry for more. I think it should be treated. The player will do that in his [or] her way.” 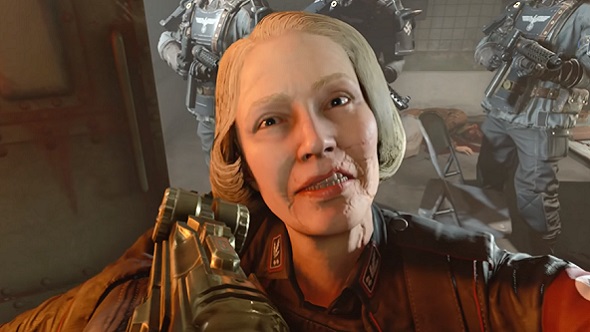 Engel is mad with that violent power in Wolfenstein II, to the point where hanging onto it is more important to her than her own family. It has corrupted every aspect of her life. She is fixated on one thing: killing B.J. for his part in the events of The New Order. At the start of the sequel, we meet Engel’s daughter, a kind-hearted woman who is a Nazi by inheritance. Engel treats her with contempt because she is not as ruthless as her mother. Like Engel’s daughter, Franoszek also has inescapable family ties to the subject matter.

“I have both in my ancestry; German Jews in Poland on my father’s side and a German general on my mother’s side, who was not in the Nazi Party, but he served in the military in World War II and as a consequence spent 12 years in a labour camp in Siberia,” Franoszek tells me. “I have always tried to find out more about the fate of the family in Poland, the grandmother who died in a work camp there, and did a lot of research on the subject, interviewed the grandfather who had survived Siberia, and I visited Auschwitz. All this is complex and made me ask a lot of questions about the human condition and what we are capable of. As an actor I have the unique opportunity to bring all of these experiences to my roles and transform and touch with my storytelling. 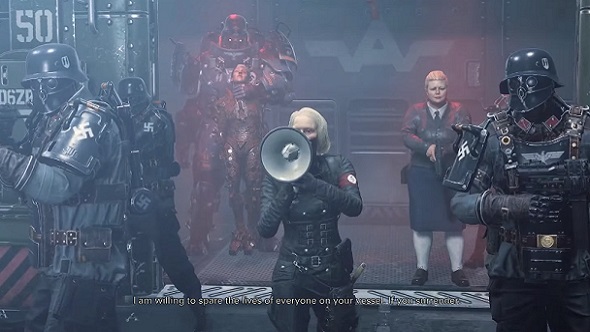 “When we shot the card game in Wolfenstein: The New Order, I got a glimpse of how perverted and cynical this power hungry ‘Aryan idea’ was – and what a perfect setup it was for hateful, arbitrary bullying, degrading slavery, stealing, and murder based on the bold claim of being a superior race. The overwhelming response of the players and their reaction to Frau Engel’s card game scene really moved me, as every one of them had gone through a dark experience that opened them up to understand the depth of torment my ancestors endured, or anyone today who experiences enslavement or suppression because of their race, nationality, or religion.”

Wolfenstein II tackles such difficult subject matter with a confidence rarely seen in games. Machinegames’ writing is of a uncommonly high standard, and takes on subjects ranging from domestic violence to the aftermath of a nuclear blast, each one, tugging at players’ emotions but without it feeling like the writers were leaning on shock value. But while the writers deserve every credit they get, it is also the performances of the brilliant actors who bring it all together. They are willing to tap into depths of the human condition they did not even realise were there, harnessing their own histories, and using all of that to create characters that bury themselves deep into your psyche.