Before the release of Wolfenstein II: The New Colossus, we interviewed videogame experts from the Jewish community and asked them what their feelings were about how videogames as a medium tackle World War II and Nazism. The overall message was that developers can and should do better, by showing more of the conflict than snippets of big battles, by showing the victims, and by not portraying Nazis as cartoon villains. Now Wolfenstein II is out, it seems worth revisiting those points to see how it stacks up.

See what we think of the game in our Wolfenstein 2: The New Colossus review.

On the surface, Wolfenstein II appears to be a dumb action game: its main character, B.J. Blazkowicz, appears to be a typical American jock, all square-headed and brawny; it lets you cart yourself through a U-boat, killing Nazis from a wheelchair; and, at one point, you ride a fire-breathing robodog. There is more to Wolfenstein II than this, however, and the same goes for its meat-headed protagonist. You see, one of the first issues raised by those we spoke to was how many games built around WWII focus on the combat and ignore the atrocities that ignited and framed these battles. Videogames are often so focused on recreating the ping of an M1 Garand that they forget the victims of the Nazi regime, whether those victims are Jewish, black, Romany, gay, or anyone else. 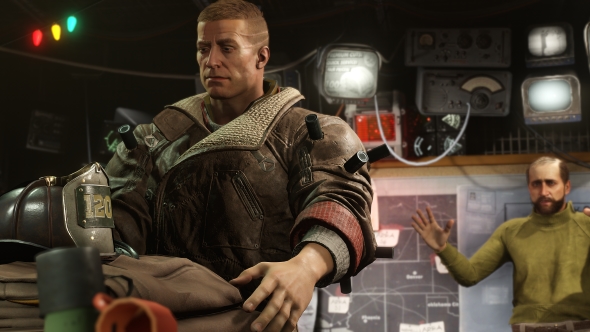 Wolfenstein as a series had always been coy about Blazkowicz’s heritage, but this sequel finally confirms his bloodline. His father is a Polish immigrant and his mother is Jewish. Blazkowicz might pass off as ‘Aryan’ on the rare occasions when he stows his guns around Nazis – to the point where one Nazi in this game even compliments him on his facial structure – but beneath that seemingly American face is a Polish Jew, the idealistic agent of vengeance for the entire Jewish people.

The game begins with a series of flashbacks. We see B.J. growing up with his loving mother and his abusive father, Rip Blazkowicz, an angry racist who subjects him and his mother to domestic abuse after seeing his son playing with a black girl. Rather than being added for simple shock value, these scenes are there to address another point raised – how Nazis are often portrayed as caricatures. Simply saying Nazis are bad has no educational value, after all. However, through Rip Blazkowicz we are given a glimpse of how someone can slide into a hateful ideology by harbouring bigoted viewpoints.

Later in the game, B.J. returns to his family home and confronts his father as an adult. In those early-game flashbacks, Rip is shown as a desperate, angry racist who is financially struggling. He blames those struggles on everyone but himself. When we see him in the present, he is a man who has flourished under Nazi rule. He accepts the occupation thanks to the great personal benefit that he can gain from it. Wolfenstein II delivers the same message in its Roswell mission – we see KKK members taking fascism tips from Nazi soldiers, American citizens talking eagerly about taking German language lessons, and crowds gathering to celebrate a Nazi parade as jets zip overhead and swastikas flags ripple in the breeze. We are shown an America that is complicit. 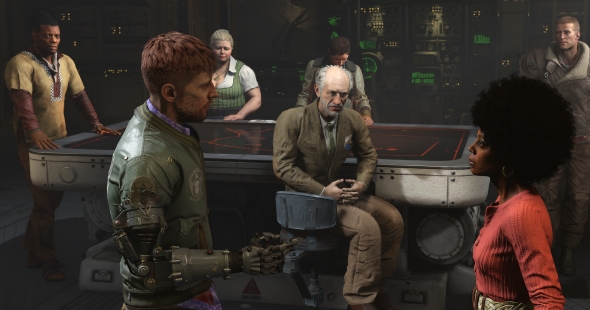 Of course, Wolfenstein II does have its share of Hollywood Nazis and silly caricatures. Some of the incidental dialogue paints them as comedy villains, with two of the most memorable talking about their favourite quips to deliver during an execution. However, there are also Nazis you will stumble across who have lives outside of the regime. One memorable Nazi tells another about his acting aspirations before you bring down his curtains with a gruesome hatchet blow. There are also various diaries you can read that paint some of the soldiers as less-than-willing participants in the violence.

When you meet Grace Walker, an African-American leader of a Black Panther-esque resistance group, B.J. looks at the devastation all around him, the fallout from a Nazi nuke dropped on top of New York, and tells her, “Monsters did this,” to which she replies, “Not monsters. Men.” It drives home the point: it is people who commit these atrocities. One of the most poignant scenes from the game is Grace’s retelling of the moments after the nuclear bomb fell on New York. Sitting on a sofa in the ruins and smoking a cigarette, her baby on her breast, B.J. notices the burn scars running up her arm. 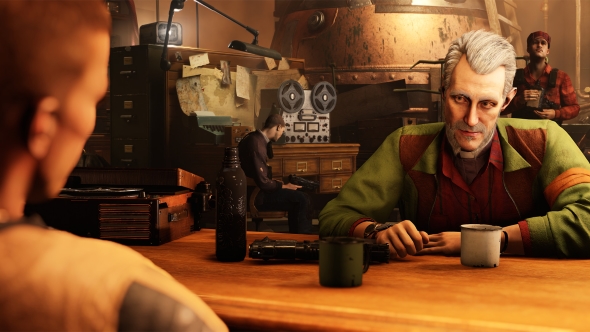 “You were here when the bomb hit?” he asks. “Yeah, I was,” she replies. “I survived relatively unscathed because I was underground at the time. When I came up, looked like a vision out of Dante’s Inferno, you know what I’m saying? I remember maimed people just wandering through the smoke. I remember… the screams echoing through bombed out buildings. Like howling ghosts. And I remember this mother and son. This boy was blindly stumbling through the chaos, his arms were outstretched… calling out for his mama. The heat from the bomb had melted the skin from his arms and they just drooped… like he was wearing a shirt that was a couple of sized too big. And I remember his mama. She was crawling to get to him. And half of her body… was all gone. It was just… gone. What are you thinking in a moment like that? When you know you are losing everything you love?”

The conversation ends as she burns her finger on the cigarette, paralysed by the memory. This scene is particularly poignant, given its clear inspiration from real witness accounts of the Hiroshima bomb. As those that shared their thoughts in our article stressed, it is important to make people consider the real victims of war when leaning on such a harrowing historical period for entertainment purposes. It can’t be just fun without any attempt to make us think. We cannot forget, and we cannot turn real people into make-believe monsters. With this in mind, Wolfenstein II feels like the boldest example yet of a videogame delivering that message.