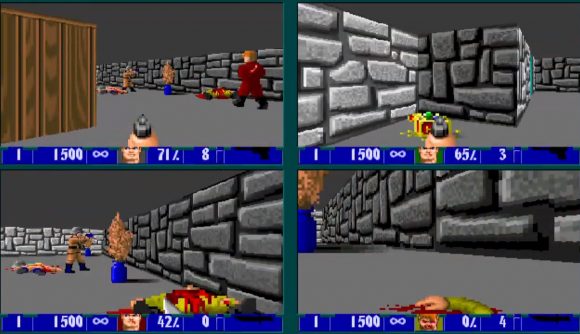 There were shooting games in a first-person perspective before Wolfenstein 3D – such as Maze War – but id Software’s 1992 classic is perhaps the first ‘modern’ FPS. It’s still special to gamers of a certain generation, such as the modders who have brought its development full circle by adding contemporary ideas, such as split-screen co-op, vehicles, and game modes like ‘carry the flag’.

The mod that does all these wonderful things is called SplitWolf. Its headline feature is vertical and horizontal split-screen support, enabling up to four players to frag Nazis in local co-op (full joystick and controller support should help ensure you have enough inputs for everyone). The mod supports Wolfenstein 3D, its prequel Spear of Destiny, and the Return to Danger mission pack.

But, as if playing Wolf 3D in four-player co-op weren’t enough, SplitWolf adds nine all-new game modes inspired by modern ideas. These include Carry the Flag, in which one player must take a flag to the end of the level before time expires; Defuse the bomb, in which you need to find and defuse a hidden bomb, again before time expires; and Instagib, which gives you only one life and makes everyone’s guns (yours and theirs) kill in one shot.

There’s a Nazi zombies mode too, but it’s not like Call of Duty’s – it simply requires multiple players to team up in killing the zombies, otherwise they’ll reanimate.

SplitWolf even adds vehicular weaponry to the game in the form of a two-player mini-tank. One seat is for the driver, who can run over Nazis, and the other is for a gunner, who gets a mounted minigun. There’s also plenty of all-new art designed to fit with the look of the original game, including eight-way boss sprites and gib animations.

Nostalgic? Check out the best classic games on PC

Sound good? You know it does. Head to ModDB here to download SplitWolf. Note that the mod was initially released in 2016, but it only came to our attention with its latest update, which makes it available on the Raspberry Pi. Ensure you’re looking at the correct installation instructions before you wonder what ‘RetroPie’ is.