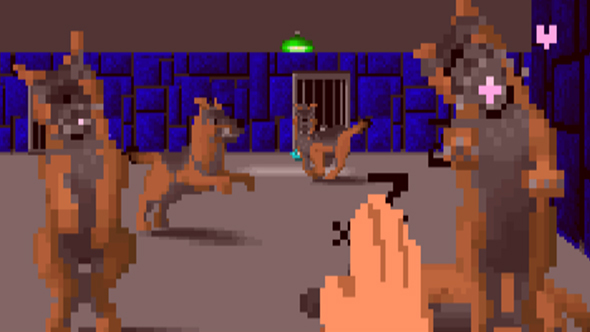 Despite the title, Wolfenstein has never really been about its canine companions. Sure, there have been Nazi dogs, and robot Nazi dogs, but what about those good boys who aren’t part of the Nazi war machine? Thankfully, a mod for Wolfenstein 3D has turned the evil-filled dungeon into a castle full of pups who just want to be petted.

Not all of them have been modded for dog-petting, but you should still check out the best old games on PC.

Titled Woof3d (or Return to Castle Woofenstein), the mod repopulates the game with loving dogs and replaces your weapon with a hand to pat the good puppies. They’ll jump on you, so watch out! A few gentle pets will put them into a gentle sleep.

This is a proper mod for Wolfenstein 3D, so you’ll have to use DOSBox – or dig out your old pre-Windows 98 PC. You may find the dogs’ friendly attacks a little unrelenting, so the mod maker recommends turning on god mode, which you do by adding “-goobers” when launching the game at the command line, hitting Shift+Alt+Backspace in-game to enable debug mode, and hitting Tab+G to enable invincibility. (There’s your handy DOS game cheat for the day.)

You can grab Woof3d from itch.io, and pet those dogs to your heart’s content. I’ll be looking forward to the eventual modern Wolfenstein mods for maximum dog-petting fidelity. Alternately, I’d be up for a real life mod where we replace the Nazis with friendly German Shepherds.