Screw your extra pixels and your haunted, ever watching television, Wolfenstein: The New Order demonstrates the most important thing to come from the advent of next-gen consoles: you can now draw cocks on crates.

Wolfenstein: The New Order has a gun that acts as a laser cutter. On the right surface you can use this laser cutter to make holes. The holes it cuts are in the exact shape you draw on it.

Within a minute of sitting down to play I’d cut the outline of a six foot tall phallus and balls on a chain link fence. My only disappointment was that I didn’t get a chance to doodle pubic hair before the fence fell in.

I liked Wolfenstein way more than I expected to. I think it’s because it’s so cheerfully unpretentious. It is a game in which Nazis are now in control of 1960s London. You are, as ever, an angry man named BJ.

Even though you’ve defeated them multiple times – in Wolf3D, in Spear of Destiny, and in that other Wolfenstein reboot, the Third Reich has grown stronger. They have put a man on the moon, invented man-sized robot dogs and fusion powered helicopters. They’ve also converted the UK to the metric system. Those bastards. 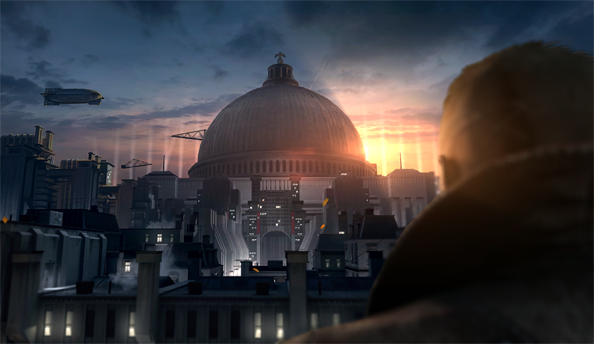 At its heart, Wolfenstein is a pretty good shooter. It has a parade of Nazis, a series of set-piece shoot outs, and some physics puzzles. If you’ve played an FPS in the past ten years, you know exactly how this works.

It’s being made by a relatively new team, Machine Games, but they have form: many worked at Starbreeze, the studio responsible for the Chronicles of Riddick games. That game attempted and succeeded at small innovations; novel use of stealth and melee combat. Wolfenstein attempts something similar.

There’s quite a clever lean button built into the game that works as an excellent replacement for third person cover systems. If you’re hiding behind a wall, you can peek over by holding down a shoulder button (my demo was on a PC, but playing with a controller), and fire. Unlike previous games, this isn’t a binary choice: you control the depth of the lean. You can peek out a little bit, or a lot. There’s a focus on sliding and ducking that reminds me a little of Mirror’s Edge – although you’re not actively taking place in parkour, you’ll quickly find yourself sprinting between pieces of cover and sliding on your knees as you do so. Whilst blasting the two shotguns you wield from either hand. 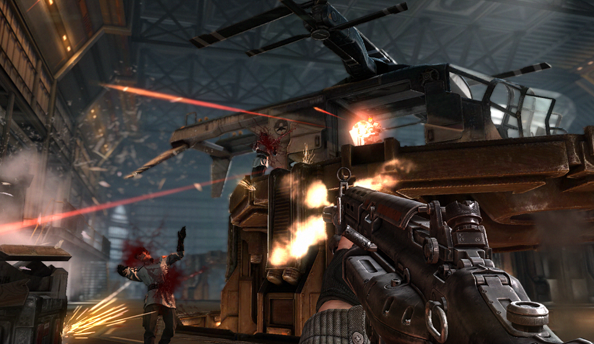 It’s also oddly full of character. The first sequence I saw of the game sees BJ confronted by a new Nazi villain named Frau Engel. She’s a wrinkly and vicious old cow, who comes with an accessory: a weasel-faced early-twenties fuck buddy she calls Bubi.

The sequence gradually ratchets up the tension: BJ is called over to sit with Frau in order to test his true Aryan heritage. Whilst watched and guarded by a man in a giant mech suit, she showed BJ a series of pictures. Frau claimed that she could tell if he was a true believer in the Nazi ideal by which pictures he took. As she reveals each picture she jokes and flirts with Bubi. The age gap clearly isn’t an impediment to their shagging.

What’s powering the tension is the improvements made to id tech 5, the engine that debuted with Rage. Rage didn’t make a great showing of that technology; but Wolfenstein does a much better job of displaying what Carmack and co. can make. It is at least pretty, occasionally beautiful. More importantly, it’s dynamic. In the gunfights, great care is taken to ensure that rooms are left flattened; great chunks taken from the concrete, bullet holes peppering the walls. In a set-piece shootout in a memorial to Nazi domination of the moon, the moon itself is cracked open. Every stray bullet that impacts the model of the moon drops a panel, revealing an empty shell. It’s an effective demo of the improvements id and Machine Games have made to the underlying tech. 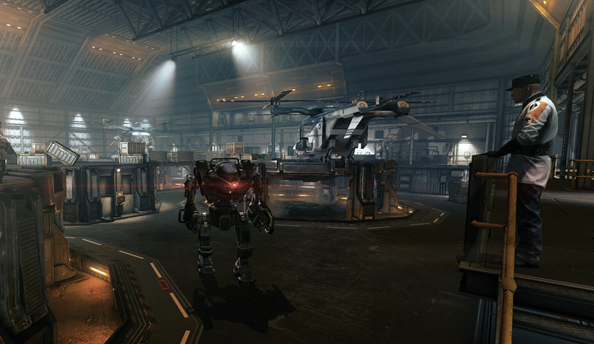 It’s not a perfect game by any stretch. The robots are a bit crap for a start. They’re meant to be big set-piece encounters, but in fact, they simply act as blockades. Because they don’t have the best AI, and seem to be rooted into one place, they’re just incredibly boring to fight. They might be loud, and do loads of damage, but that advantage is quickly negated. The robot fights come down to a single exchange: you may progress to the next encounter if you swap, with the robot, the contents of your ammunition belt. That’s it. Pump them full of lead until they fall over. Job done. It’s all a bit flaccid.

Which brings us back to the cocks.

When Wolfenstein was announced, Warren Spector posted “did the world really need another Wolfenstein game? Did we need a generically dark, monochromatic, FPS, kill-the-Nazi-giant-robot game?” to his Facebook page. Do we need another “adolescent male power fantasy”?

I’m happy to say: yes, I think we did. Wolfenstein is a kill-the-Nazi-giant-robot game. But it’s trying to do interesting things. It understands that players have expectations beyond pointing their cursor at a Nazi’s head. They want to be challenged, amused, and have their expectations surpassed. This is not an easy job, particularly within a series like Wolfenstein.