Wolfenstein: The New Order is a game about shooting men. You shoot the men with your guns and all their blood comes out. When the men get shot they fall over and scream and sometimes their head comes off.

If you want to you can have two guns and you can shoot them both at the same time.

You can stab the men in the head with a knife. You have grenades that you can throw and they blow up the men and their blood goes everywhere.

Wolfenstein: The New Order is a shooting game fan’s shooting game. It’s short on frills, never veering far from the fundamentals of what makes a good first-person shooter while still conveying a steady variety of new guns and new enemies and new surroundings in which to shoot those guns at those enemies.

It’s pulp and comic, it’s crass and ultraviolent but it plays it off with Tarantino coolness, with an understated soundtrack, affable cast and unconvoluted storyline that gives it a dark style all its own. It doesn’t take itself very seriously, it’s a game that allows you to dual wield sniper rifles, but it’s keenly self-aware. Like in Wolfenstein 3D, you can eat bowls of dogfood to regain health, but the game doesn’t congratulate itself for having made the reference. 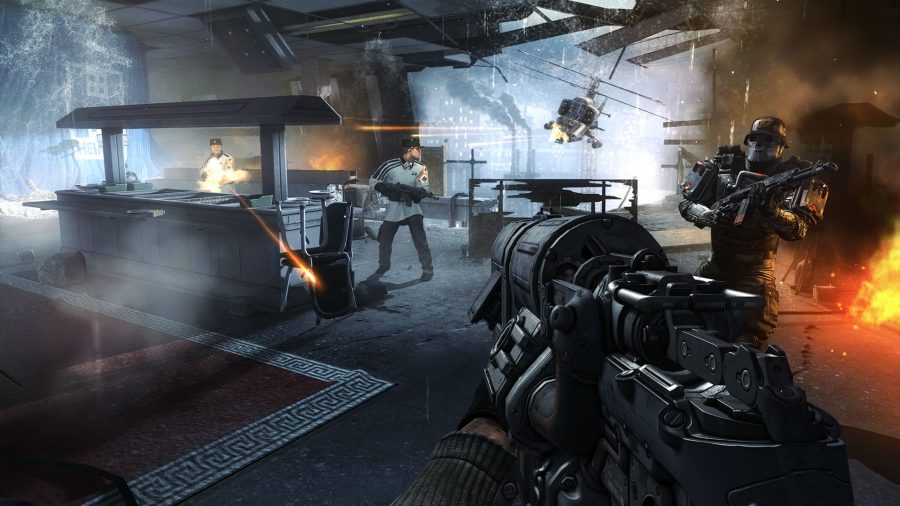 Pick up a few dozen helmets to increase your armour, eat a Nazi’s roast dinner to overdrive your health, the game is unapologetically true to its weird roots while not beholden to them. There are no QTEs, chapters are linear, stealth is basic and never forced, objectives are meaningful and missions feel important, and shooting the guns at the men and seeing them fall down, thanks to an arcane mixture of physics, sound, recoil and animation, just feels exceptionally satisfying.

The game starts in 1946, with ridiculously hench all-American hero William ‘BJ’ Blazkowicz — a man whose name everybody says without laughing — pottering around a bomber with his allied buddies, about to launch an attack on General Deathshead’s Nazi stronghold. Things go wrong, the Nazis are unexpectedly technologically advanced and they’re winning the war. Thusly, allied planes begin crashing into one another over and over, repeatedly forcing BJ to jump from aircraft to aircraft in exciting and largely non-interactive scenes.

More things go wrong. You’re introduced to this alternate-reality Nazi force, a cultural shorthand for despicable shits cheekily swiped from the history books, now comically exaggerated and armed with mechanical dogs and building-sized, tripedal robotic tanks. The Nazis are effectively led by this Deathshead character, a disfigured and psychopathic stand-in for Adolf himself. Deathshead appears very early on, which I think is how good storytelling works, before flouncing away, all swathed in his temporary victory and leaving you to die. 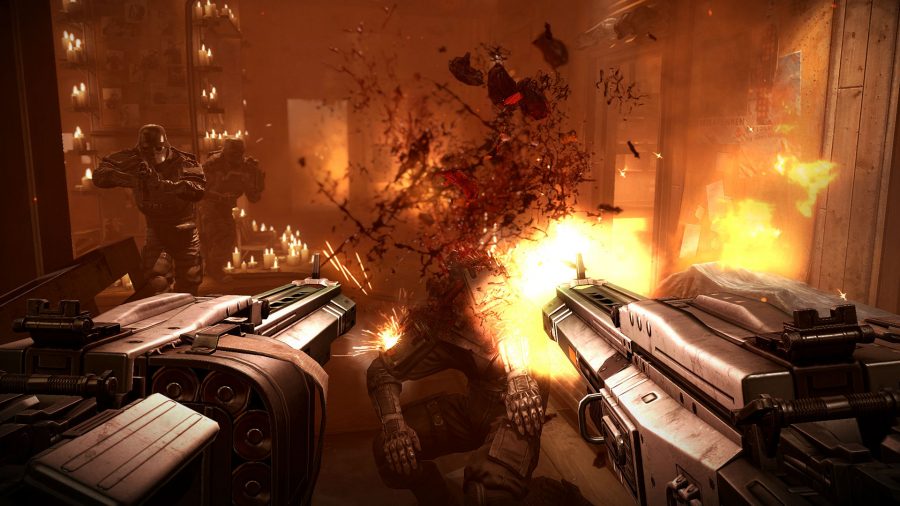 But you don’t die! Of course you don’t die. You wake up in a Polish mental asylum fourteen years later in a world controlled by the Nazis. This means that all the guns are different, things are a little bit more sci-fi and you encounter advanced versions of the enemies you briefly met in 1946. The game doesn’t beat you over the head with exposition either, using well-edited cutscenes to advance the plot but only ever subtly suggesting what’s going on in the wider world.

You can read about it. There are newspaper scraps littered throughout every level, or little bits of flavour dialogue to overhear. Even in 1946, you can spot a campaign map detailing an invasion of Scotland, with armies marching into the highlands from the Nazi-controlled north of England. That’s lovely detail and world-building, made all the more lovely for sitting quietly in a room and waiting to be discovered by the willing player. Wolfenstein does a lot to avoid deflecting attention away from shooting men in the face, the thing it knows it can do best.

Much like the original, levels are littered with secrets hidden behind fake walls. You’ll discover them by hitting E on the furniture and watching which bookcases spin around to reveal rooms full of ammo. Sometimes you’ll find a secret route, or one of a few dozen unique gold items. A story point early in the game forces you into a decision that results in two separate timelines: one in which you’re granted the ability to pick locks, and another in which you can hotwire certain terminals. In effect it means you need a minimum of two playthroughs to catch everything, which is annoying if you really care about that kind of thing. 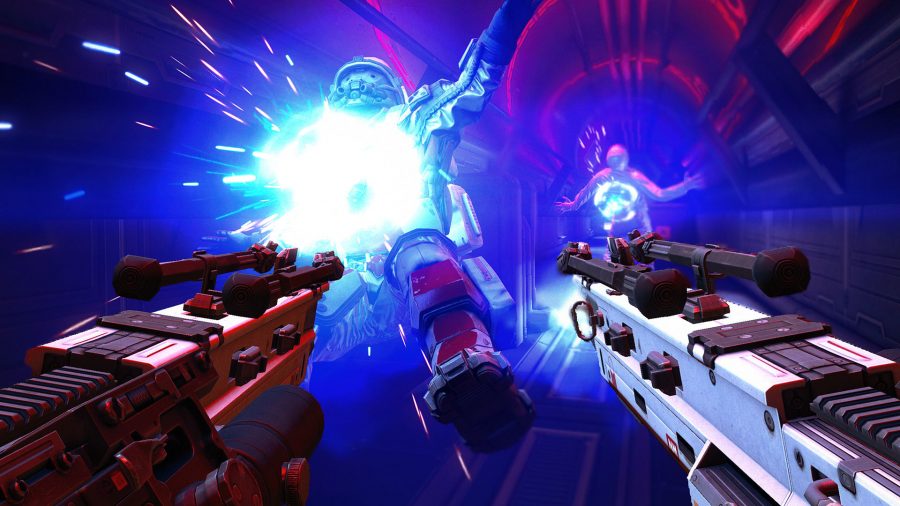 Lock-picking and hotwiring aren’t especially elaborate mini-games, requiring just a piffling amount of momentary dexterity as you align two objects beneath your mouse cursor. Again, this is Wolfenstein’s low-fat design in action. Stealth follows much the same pared-down idea. Areas can have one or two commanders patrolling, distinctly dressed Nazis who can call in endless reinforcements if spooked. Stealth is a matter of staying crouched to remain inaudible and using melee attacks from behind to quietly murder your enemies, all while working towards these targets.

By assassinating the commanders you remove the threat of more soldiers being summoned. Once you’ve stealthed far enough to do that, you may then do as you please, as loudly as you please, with the remaining forces. Even if you prefer barging in noisily, these commanders give you priority targets to watch out for. It’s low-risk stealth, with the reward being a slightly easier ride and the punishment being a few more enemies to shoot at (and if you were noisily shooting enemies in the first place, hey, that’s probably what you wanted). It’s worth pointing out too, because it’s so sadly common, that being spotted is never a fail state.

Stealth abilities are one of four perk trees that unlock as you play. These perks aren’t reliant on XP and become available automatically as you perform certain actions. From the mundane (headshot this many Nazis) to the tricksy (kill this many enemies while sliding across the floor all cool like), the optional perk objectives promote some interesting styles of play. 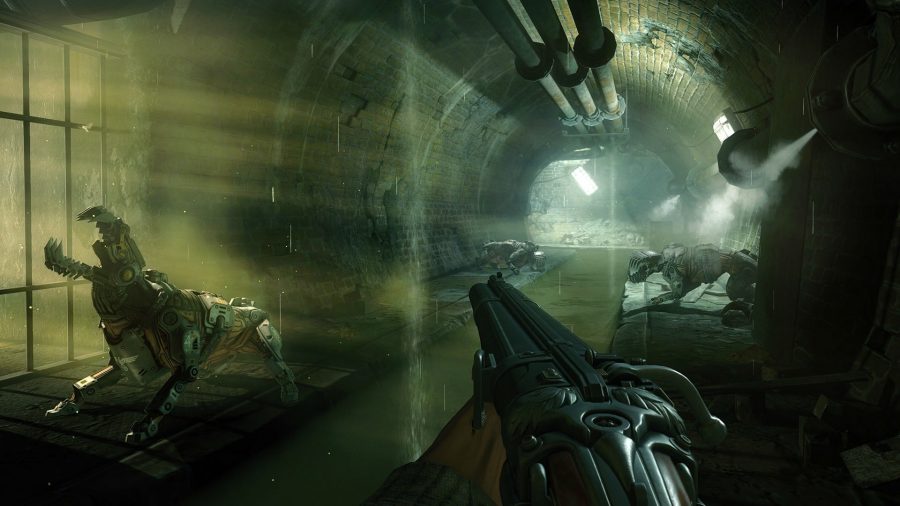 You’ve also got an interesting set of alternate firing modes on each weapon. Pistols can have silencers screwed on in aid of stealth, assault rifles get grenade-launchers, your sniper rifle can become a full-on Star Wars grade lasergun. The armoury is diverse and ammo is scarce enough to nudge you away from your preference, while plentiful enough not to leave you scrounging.

Hammering E to pick up armour and ammunition is an obvious frustration after a few hours of play, and you’ll wonder whether some sort of an auto-pickup feature would’ve improved things, made you feel less like you’re picking up confetti by hand. Weapon switching on the mousewheel is a bit cumbersome too, but then we’ve been coddled by this generation’s propensity to only ever give you two guns at a time. Learn which buttons correspond to which guns and you’re golden. A few errand-boy missions in the resistance’s hideout, a sort of narrative-heavy hub level, causes a bit of stumbling in an otherwise pacey plotline too.

They’re minor speedbumps in an otherwise polished game. And remarkably, Wolfenstein draws some honest emotional heft from what could’ve been a lazy cast of clichéd good guys versus a questionable caricature of history’s favourite assholes. Instead I found myself caring about these resistance fighters and fearing these monstrous villains, endlessly surprised that a game in which you eat dog food and dual-wield sniper rifles can turn around and competently explore some very human themes during its quieter moments (and not in that disgustingly self-satisfied way that so many over-written games tend to).

Wolfenstein is a masterpiece of its genre. It does good shooting men. But it’s more than that, it’s an effortlessly melancholy adventure that doesn’t drown in its own bombast. It’s like finding out that a superstar footballer is a poet, or finding your dog pressing flowers. It’s a game with hidden depths that you’re invited to explore, but ones that never overshadow the thing it’s best at.

Which is shooting all the men so that all their blood comes out.

You should probably make sure Wolfenstein: The New Order works on your PC before you buy it, because by all accounts it’s properly buggered on some setups. I played at medium settings without problems on an i7 920 CPU, 6GB RAM and an ATI Radeon HD 5700. I did have some trouble with id Tech 5’s textures not loading in properly when I span around too fast, but I remedied this by considering for a moment all of the other problems in the world. Also by not turning around so quickly. Your mileage may vary.

Can you run it? Check the Wolfenstein: the New Order system requirements.