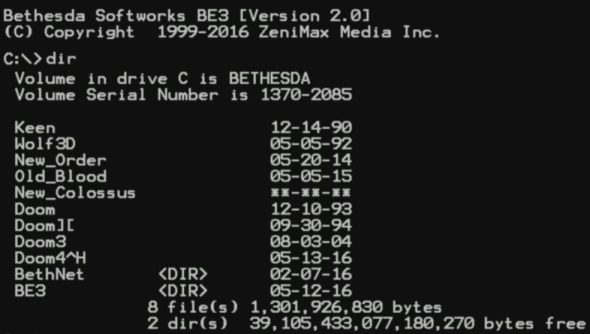 A tease during the faux-boot screen that opened Bethesda’s conference has pointed towards a new Wolfenstein game called Wolfenstein: New Colossus.

When we’re not going for wild speculation this E3, we do some pretty good PC gaming news too.

While officially Bethesda didn’t mention the game, the file name New_Colossus appeared alongside other Wolfenstein game titles, with the release date of **-**-**.

Last year, the actress from Wolfenstein: The New Order Alicja Bachleda-Curus revealed that she was working on the second part of a video game she’d already done the first part of.

We don’t have much more to go on, although it’s very likely that we’ll hear more about the game at Quakecon in August, alongside the studio’s Quake reboot.

Earlier rumours hint at a 2017 reboot for the next Wolfenstein expansion, and this would fit with the now very full slate of releases Bethesda is carrying into the second half of the year.

I’m always excited for more Wolfenstein, so I’ll be keeping everything peeled.