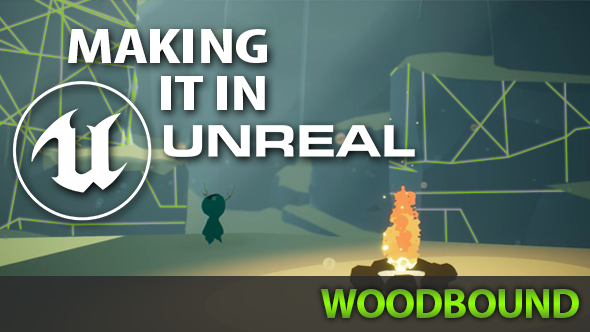 Woodbound is a strategy and survival game about a world reclaimed by nature. A wilderness ruled over by a mysterious and demanding entity. From a strategic perspective that’s tough, leading your tribe of scavengers to hunt, trade or steal to keep themselves fed and clothed. But from an aesthetic perspective it’s absolutely lovely – a place where Studio Ghibli and Scooby Doo combine in an ode to old-school animation.

To hear solo developer Christian Sparks tell it, the journey there has been one of patient iteration, bold changes and sudden, overwhelming feedback.

The most striking thing about Woodbound is an art style that’s defined by light and space. But it wasn’t always this way. When Sparks first started the project, around his full-time IT job and family life, he was playing a lot of Don’t Starve. Woodbound soon developed a gritty, dark look to match the Burton-esque survival game that filled his spare hours.

“But as I kept playing with it, I ran into a couple of things that bugged me,” Sparks remembers. “The main thing was that the whole scene, wherever I went, was just too noisy for what I imagined it to be. So I started looking at some other art styles.”

The first place that Sparks looked was the films of Studio Ghibli. Once you know, it’s obvious that Woodbound’s protagonist – a tiny hooded figure with stunted antlers and mostly blank facial features – owes a debt to the troublesome masked spirit of Spirited Away, No-Face. And in the flora surrounding that character, the emerald green influence of Zelda is clearly felt.

“I haven’t even played Breath of the Wild yet,”Sparks admits. “But it’s still been hugely inspiring, visually.” 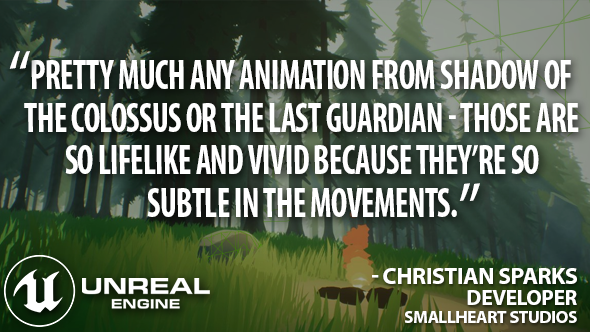 Sparks’ best visual trick has been flat lighting: a technique which illuminates its subjects evenly, as if on a bright but cloudy day. It’s a far cry from the dramatic light and shadow a more Burton-esque style might have produced, but comes with its own character.

“The main thing I was shooting for was, again, older animated works like Studio Ghibli,” says Sparks. “Where you’d have a really nicely painted rendered scene, and the frame-by-frame shot superimposed in.”

In Woodbound, complex light and shadow is reserved for static objects like rocks. Anything animated frame-by-frame – a tree’s branches, a character’s cloak – gets the flat lighting treatment. It’s a style of contrasts that Sparks compares to Scooby Doo, in which a hiding figure stands out from their background by dint of being hand-drawn.

“You can tell they’re going to move,” explains Sparks. “I think it gives Woodbound that personality that older shows would have.”

What brings Woodbound’s landscape to life is the wind, whipping through its forests and across its plains. The breath of the wild, if you like. You can practically hear the gentle roar of the trees in the GIFs Sparks regularly uploads to Twitter – though, of course, they’re soundless. In fact, the game only simulates the effects of wind: the trees and grass buffeted by an imaginary breeze.

“It’s actually a really basic setup,” Sparks says. “In Unreal Engine 4, there’s a grass wind node that just applies [visual] noise to the vertices of the geometry, and you can customise it to have bigger or different waves. The thing that set it apart, I think, was the visible specularity lines that you can see blowing across the grass.”

This simple trick is no more than a colour change to the texture of the grass, but gives the appearance of wind rippling through a field. The overall effect suggests a surge of air crashing through Woodbound’s world, though there’s nothing really there at all.

One of Sparks’ greater challenges was getting the frequency of these lighting and animation effects right, so that they wound up spine-tingling, rather than silly or surreal. It’s a careful balance learned from Japanese game

“Pretty much any animation from Shadow of the Colossus or The Last Guardian – those are so lifelike and vivid because they’re so subtle in the movements,” he says. 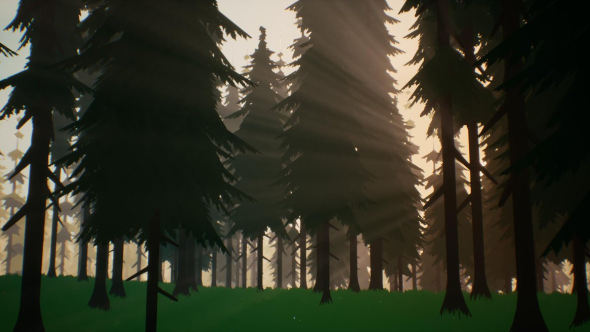 Once Sparks posted the results of his programming experiments on Twitter, they blew up – unexpectedly putting his project in front of many more eyes than before. He was delighted, but there was a problem: Woodbound’s Don’t Starve influence extended to a top-down camera. From that lofty perspective, players wouldn’t be able to fully appreciate the world he’d wrought.

“I ended up trying it out without any of the game mechanics and just unlocking the camera,” recalls Sparks. “It played and felt completely different in the best way possible. I figured it was worth it to change up the game mechanics to fit a more free camera style.”

Though the camera switch was simple, the attendant design changes were not. Sparks had put together a base-building system based on a radial menu that suddenly didn’t work. It was scrapped, in favour of a grid-snapping system compatible with two new view modes: a free-orbiting camera and an over-the-shoulder view that shows off Woodbound’s world at its best.

“There are definitely a lot of changes that had to happen because of it,” he says. “I think it’s for the better. It almost felt like an accident when I posted the stuff and people responded the way that they did. I was floored, and it definitely brings me pride.”

In recent weeks, Sparks has taken a step back from social media. He’s refocusing on the very thing that brought him traction in the first place – making quiet progress with Woodbound. But his enthusiasm for his craft has exploded along with his follower count.

Woodbound is coming to PC. Unreal Engine 4 is now free.

In this sponsored series, we’re looking at how game developers are taking advantage of Unreal Engine 4 to create a new generation of PC games. With thanks to Epic Games and Smallheart Studio.