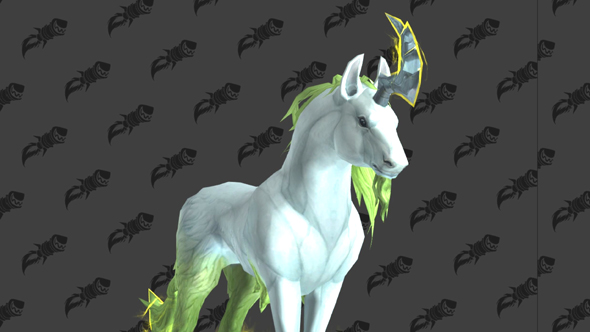 One of the developers behind World of Warcraft’s Battle for Azeroth expansion has revealed that players will soon be able to tame unicorns, and keep them as pets.

Senior Game Designer Jeremy “Muffinus” Feasel had been tweeting out a number of hints regarding upcoming content, including the note that “Battle for Azeroth content creation is coming to an end soon”, so everything introduced in the beta will start getting brought into the live game. He also promised that, “many awesome new things will show up in the next build”.

Shortly after that he tweeted again with the words, “tameable horse2s”. ‘Horse2’ is the in-game name for unicorns, which were introduced in the Legion expansion. There are several different varieties and colours, and are available as mounts – with differing levels of rarity.

Check out our list of the best MMOs on PC. Yes, World of Warcraft is still there.

Have a happy weekend. 🙂

He later clarified that “I didn’t say only horse2s”, suggesting that other species will also soon be tameable.

Perhaps connected to this, dataminers have discovered numerous interesting pets in the latest update to Battle for Azeroth, which were detailed over at Wowhead. These include tameable wasps, giant serpents, trilobites, huge toads, and even dinosaurs.

Players also recently discovered a Diablo-themed pet, a demon goat called the Baa’l, which can only be a reference to Blizzard’s other popular fantasy game series.