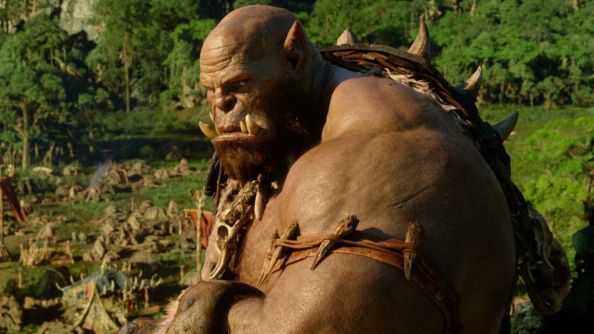 A player survey sent out by Blizzard has revealed one of their possible plans for the inevitable tie-ins between the Warcraft movie and WoW. In what they’re calling the “Ultimate Movie Edition”, anyone who buys a ticket to see the film will be given World of Warcraft, all of its expansions so far and a month of game time, as well as a unique in-game item. They’re looking for player opinions on it.

Here’s our picks of the best MMOs, sadly none of which you can get access to by seeing a high-fantasy movie about men killing orcs.

Here’s the details, as posted on Reddit last week by user fatsocks: 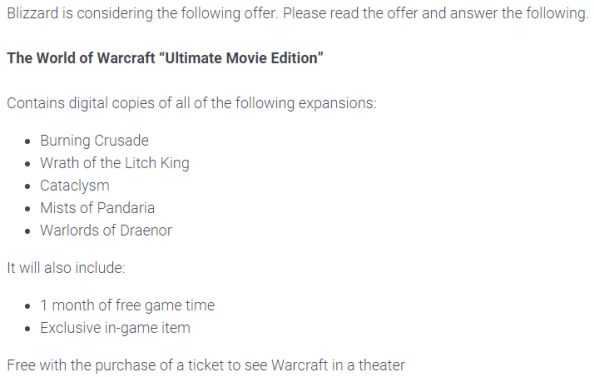 Despite the typo – which Blizzard confirmed was one, and not the indication of a phishing attempt– it seems like a rather good deal for everyone involved. Head over to the Bnet storeand you’ll see that WoW (which automatically comes with all the expansions except Warlords and a month of game time) and Warlords will set you back around £25 or local equivalent. That’s a bit over twice as much as a movie ticket over here, but Blizzard have likely sold most of the copies of WoW they’re ever going to. The movie audience is a whole other section of people.

Plus, this doesn’t include Legion, which we’d speculate will be out around the time the movie is, not least because early June is a reasonable timeframe for development to be finished, but it makes extreme business sense to have a new product out around the same time as a movie based on it. Call that a Capitalism Hot Tip from your old pal Ben. Those who do find themselves enraputed will probably have to fork out to ‘finish’ it.

Since they’re asking for feedback, this doesn’t seem like a bad thing to me, but I’d hope the free month will be applicable to accounts that already own all that other stuff. Because, y’know, I like free things, and in-game items only go so far. Time lasts forever.