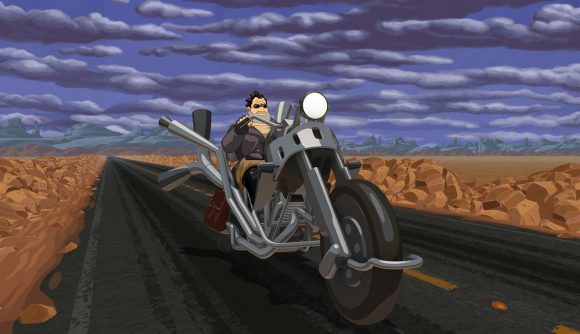 There are plenty of ways to deal with writer’s block. For some, the best thing you can do is reset by taking some time away from your work. For the director behind the World of Warcraft movie, though, the most effective way to battle through a creative slump was by adapting LucasArts’ adventure game Full Throttle into a full movie script.

Duncan Jones explains on Twitter that he’s got writer’s block a few times during lockdown, and has often browsed the web to pass the time when it happens. One day he came across a video Tim Schafer shared that reimagines what Full Throttle would look like today. The video inspired him to start writing a film script for the old game, and he must have gone through a bunch of writer’s block because the whole dang thing is complete.

The script is 94-pages long, and you can give it a read yourself if you fancy it. I’ve been slowly making my way through it as the day has progressed, and have found it to be quite nostalgic.

It’s even got the seal of approval from Schafer himself, so what more could you need?

I did wish hard for this year to be better than last year, but did not expect @ManMadeMoon to spontaneously bang out a complete script for a Full Throttle movie! https://t.co/KrCZZRPj86

If you’re feeling nostalgic yourself, you can find a list of the best retro PC games right here.