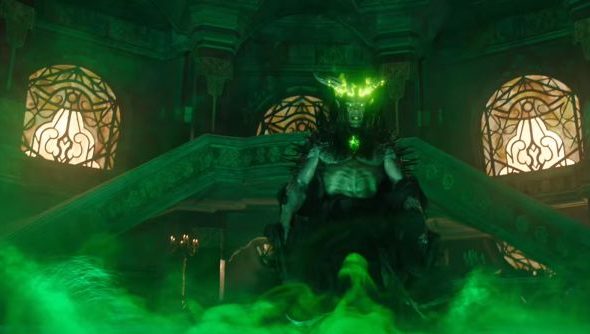 This weekend was the Epicenter Dota 2 tournament, one of the largest ever ran in Russia and the best tournament of the year so far. It had great games, big upsets, incredible sprees and worthy winners, as well as a cosplay competition (the Phantom Lancer women were robbed) and incredible production values. It also, for some reason, had Duncan Jones, director of the upcoming Warcraft movie, debuting some new footage and conducting an interview, along with Robert Kazinsky who plays Orgrim in the film. That still you see above is taken from the new footage and seems to show an unannounced character – with debate raging as to who.

Here’s the best PC games ever made – which do we want movies of?

Here’s the featurette that debuted, showing off the mad amount of special effects that are going into the production, from Industrial Light & Magic – yes, the Star Wars guys.

Ol’ green and angry up there makes his debut near the end, and the lore-buffs among the Warcraft community are deciding if it’s universe big bad Sargaras, a corrupted version of the wizard Medivh, or simply a Satyr having an exceptionally bad hair day. Based on the clips beforehand there’s certainly some sort of demon-fight going on, to be expected when Gul’dan – that’s the lad opening the portal near the start – wandering around.

As for the interview, here’s the full archive from the final day of the tournament. The need for translation makes it a mite awkward, but it’s interesting nonetheless, and Jones has the same facial hair as me. What a man.

While you’re there, check out the finals, if you like your Dota 2. An excellent tournament.