Steve Danuser has been pondering who really leads the development of World of Warcraft, and if they are even real.

But more on that later. With the new Visions of N’Zoth 8.3 patch currently being downloaded by players across the world, Blizzard’s WoW development team is finding time to reflect on an update that adds a considerable amount to the game’s already expansive setting. Danuser serves as lead narrative designer on the famed MMO, and has spent the last few months immersed in Warcraft lore.

Visions of N’Zoth introduces a great many things, from new raids and races to fresh ways to explore familiar cities and revised gear systems. But for players, the real allure will be 8.3’s extension to the narrative and cast of WoW. This is the update that thrusts the Old God N’Zoth to the fore, giving players a chance to take on one of the most illustrious characters in the MMO’s recent history.

“When we were looking at this update and the Visions of N’Zoth, this was really our chance to bring one of the big villains that’s been lurking in the background to bear; N’Zoth, last of the Old Gods – that we know about – who everyone has been eager to face,” Danuser offers, with unbridled enthusiasm. 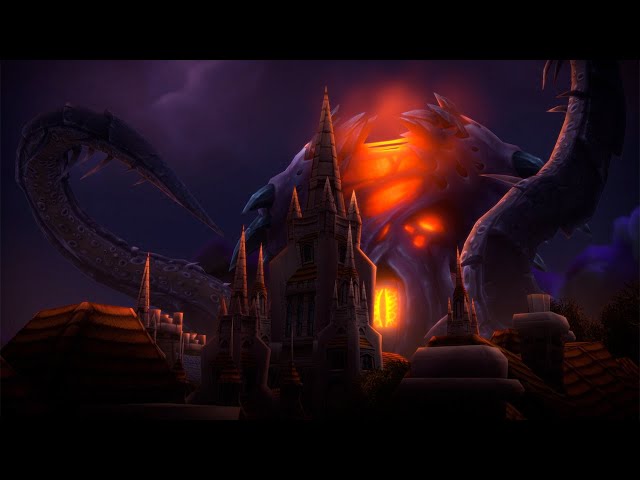 “His influence has been creeping into the world for a while now. There’ve been lots of prophecies, a lot of characters referring to him, so [we’ve been] looking at what story we wanted to tell. We really wanted to focus on him and his influence on the world – the Old Gods are all about sticking their tendrils throughout Azeroth.

The Horrific Visions let one to five players battle their way through refreshed versions of Orgrimmar and Stormwind. Just don’t expect an easy battle. The challenges are conceived to knock you back more than once, encouraging repeat play, and exploration of how the Visions can change. Stick with it, building experience, and you’ll make it through.

“We wanted to show that by not just putting his influence in one little pocket, but having him envelop the world and get his tendrils in a lot of stuff. That was our guidepost for all the content and quest lines we were going to do; how do we tell the story of a world that’s come under threat in every corner, from little average on the street people to the heroes that define many of our stories.”

That is what sits at the core of Visions of N’Zoth. This is a patch that strives not just to bolt on a distinct new area to the existing game, but to make its ramifications felt across the World of Warcraft universe as it already stands, shifting the aesthetic and tone of several existing realms. You can check out our overview of what patch 8.3 provides here, but to offer one example, two new assaults on Uldum and the Vale of Eternal Blossoms will significantly affect those locations at different times. 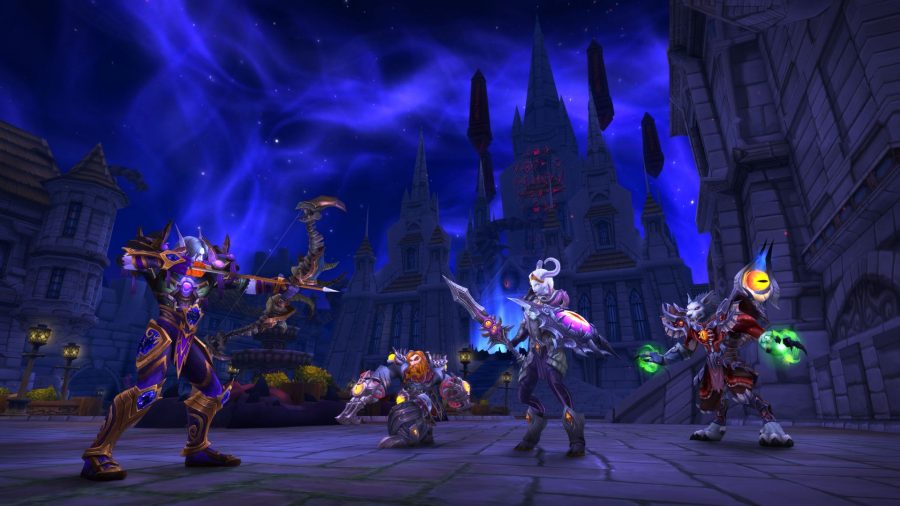 “Who is attacking and what’s going on changes throughout the week,” Michael Bybee, a senior game producer on the World of Warcraft team, confirms. “So in one zone N’Zoth himself and the Black Empire forces could be attacking, and that zone will be dark, there will be tentacles and horrible creatures wandering around, tonnes of different gameplay elements, things that change the entirety of, say, the Vale of Eternal Blossoms. And it looks really, really different, and actually very menacing. There’s creatures in the sky that make it so players have to really think about where they’re going.

We want to show N'Zoth's influence by having him envelop the world, and spread his tendrils beyond one little pocket

“At the same time in Uldum, N’Zoth might be working through an ally; somebody like the Aqir, which are these insect creatures that might be taking over part of that zone. And so players go there, and even though these might be familiar spaces, fundamentally the gameplay in these spaces will have changed. And, of course, players have access to a tonne of different rewards as a result of participating in all of those.”

It’s a clear illustration of the update’s intent to have a profound impact on what World of Warcraft is. That, of course, must be implemented with respect to the existing game world that players hold dear, and perhaps most importantly the balancing that has on the whole kept WoW on course for over 15 years. According to Bybee, the solution here has been in developing the new narrative in tandem with the patch’s game design process. 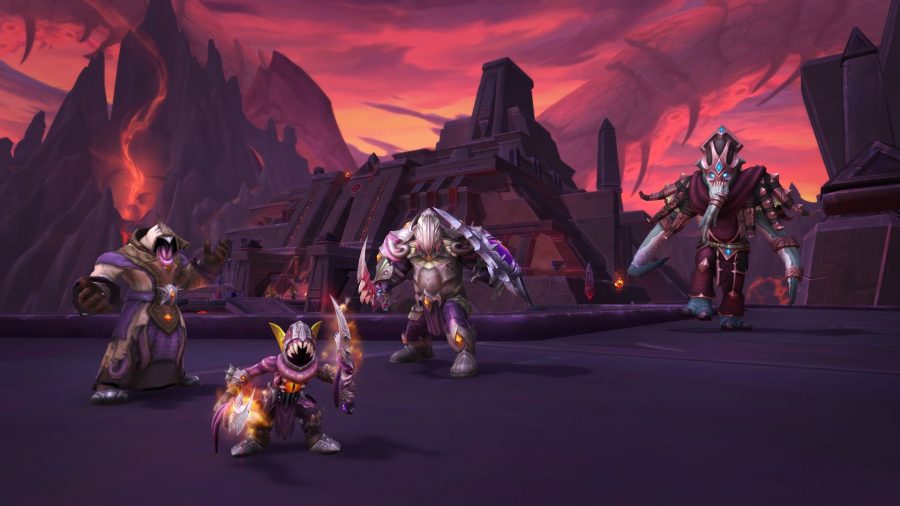 “All of that narrative structure that Steve is talking about ties directly into all of the game systems and all of the gameplay that we’ve built in this update,” Bybee explains. “So, for example, there’s a new [part of the] update called Horrific Visions, which is a method for players to be able to play with each other. Either they can do it alone or they can play with other players – and this scales from one to five players – and the whole of that experience is tied into N’Zoth’s influence on your mind, and how you lose sanity over time, and the kinds of things the heroes do to try to fight back against that.”

In essence Danuser, Bybee, and their peers at Blizzard have crafted fresh gameplay and expanded narrative content as a singular process. That gives them a singular thread to weave carefully through what World of Warcraft was before to 8.3. Ultimately, it’s about precision. Visions of N’Zoth endeavours to deliver a bounty of new experiences, ideas and tonal shifts; it’s just that the way those elements have been applied to what went before has been guided by a mantra of accuracy. 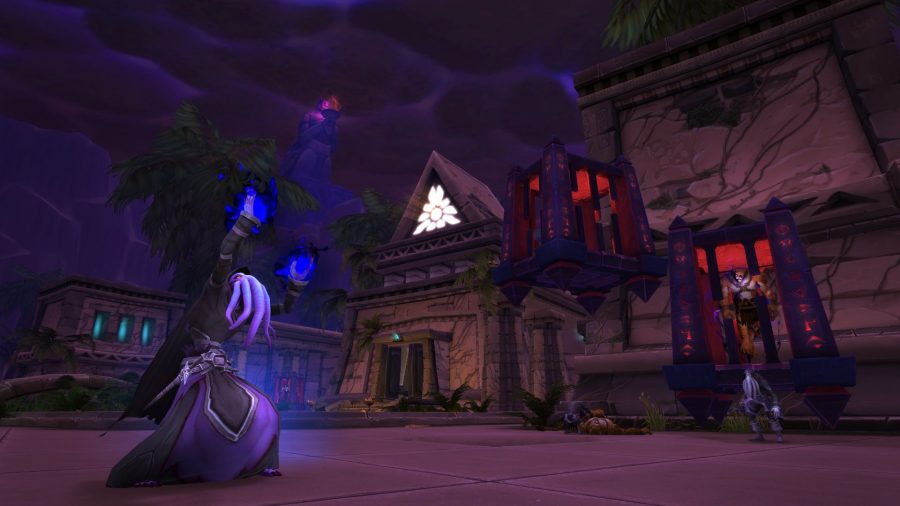 All that said, Danuser has felt another guiding force in his professional life of late, and it’s not Bybee or any of the rest of the team. A certain titular Old God has influenced almost every decision Danuser has made while working on 8.3.

“In a way, N’Zoth wins, because he’s gotten the whole team to tell his story,” says Danuser with a smile, before adding: “We’re thinking of naming him game director.” It turns out that N’zoth’s influence goes far beyond the confines of patch 8.3.