Our giveaways tend to focus on game codes and expansions, for the most part, but this time we’re doing something a little different: we’re giving away Ragnaros. That’s right you too can own the blazing Firelord – we promise, he’s not hot to the touch though.

Blizzard has been kind enough to gift us this absolute unit of a Ragnaros statue but being the benevolent gods-er I mean site that we are we think one of you should get the chance to see Ragnaros in all his glory. We’re definitely not giving it away because several of us were fighting over it, and then late one night we heard it whisper ‘DIE INSECTS’. Nope.

That’s not all, although the statue is the centrepiece of the giveaway, it comes with some pretty neat stuff. Firstly the box gives you another 30 days of game time free, always a nice bonus with a subscription service. Secondly, a map of Azeroth mousepad, so you always know where you are. You might not be able to zoom in on it, but at least it looks pretty.

You’ll also receive a little Onyxia pin, very exciting to those with lanyards and denim jackets… or maybe that’s uncool these days and additionally some fine art prints. 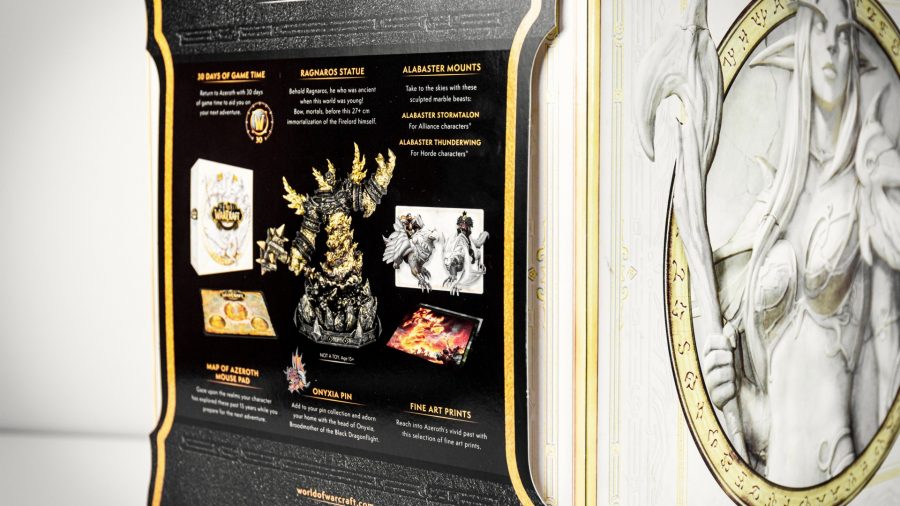 All in all, winning this giveaway gets you some really amazing stuff perfect for those in love with World of Warcraft. We only have one of these statues so you’re going to want to enter ASAP to have a chance of winning!

If you want to win then you need to enter the competition via the widget below. Complete the one action available and you’re done.