It’s early days for World of Warcraft: Battle for Azeroth and the feeding frenzy of experience grinding shows no signs of letting up. While some devoted citizens of Azeroth managed to grind their way to 120 within hours of the expansion’s launch, we took the scenic route through the Alliance isle of Kul Tiras to bring you our impressions of three of the new zones: Drustvar, Tiragarde Sound, and Stormsong Valley.

As the new zones were opened up to the bloodthirsty masses, wildlife was stripped clean in every area, and life blossomed only to be cruelly cut down within seconds by the hungry blades of questing adventurers. Ordinarily, the feeding frenzy of murder and experience gathering would be briefly interrupted by skirmishes with the enemy, but with Battle for Azeroth each faction has their own set of zones to explore, leaving no hurdles in the path of the ravenous, unstoppable horde.

Fresh from the failed attempt to seize Lordaeron from the Forsaken, King Anduin Wrynn receives news of a new alliance between the Horde and the Zandalari Trolls, when a Zandalar fleet destroys a convoy of Alliance vessels. With nowhere else to turn, Wrynn sends forth Jaina Proudmoore to parlay with her estranged mother, Lord Admiral Katherine Proudmoore of Kul Tiras, and seek their aid against the Horde.

Unsurprisingly, due to Jaina absconding with the Kul Tiran fleet last time she was there, the reception is anything but welcoming. Our noble Dwarf Monk is thrown in the brig, and Jaina is proclaimed a traitor to the realm. With a little help from a rebellious old Knight, who sees the value in partnering with the Alliance, our Monk skips out of jail and starts gathering allies from the noble families of Kul Tiras.

Our first stop is Drustvar, a shadowy land of witches, curses, and superstition. This zone clearly takes more than a few cues from The Witcher 3’s depiction of Slavic-style folklore. Crones curse villagers, cultists build effigies of bone and meat to dark gods of the forest, and mobs of villagers turn on each other when curses start appearing.

Blizzard likes to stay on the cutting edge of pop culture

It’s not all serious business though, as one questline is basically an extended reference to the remake of The Wicker Man. Before you ask, yes, someone shouts “not the bees.” Blizzard likes to stay on the cutting edge of pop culture references, you know? One particular quest, straight from a Monty Python sketch, has you collecting bizarre objects to prove to a group of ignorant villagers that their Lady is not, in fact, a witch.

Even this early on you can catch some glimpses of the new endgame features. The first quest of the expansion gets you an artifact necklace – an item that powers up certain gear depending on how much Azerite you’ve collected. 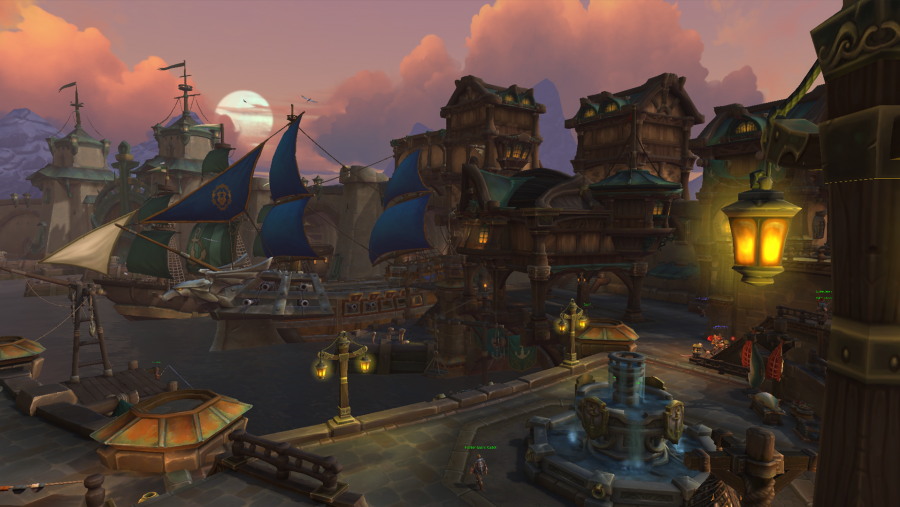 EYE OF THE sTORM

We move on to Tiragarde Sound, which is a pirate’s haven, and therefore a den of corruption and conspiracy. Lady Ashvane is the main antagonist of the area, a Wormtongue-like advisor to the Grand Admiral, full of underhanded machinations. Despite all the betrayal and drama, however, our favourite quest of the area is more down-to-earth.

Let’s set the scene. Vigil Hill is the central location of a dangerous power struggle. A warzone where buildings burn and buccaneers loot with impunity. In the eye of this storm is a small girl. She calls out to our Dwarf Monk, asking them to please save her dearest friend who’s trapped in her burning house –  her furry and loyal companion, Scratchy the cat. Being a noble soul (who’s also unable to resist the lure of experience and gold) our hero agrees to help.

The hero climbs the collapsing building, moving from one precarious handhold to another, dodging rubble and flames, until at last they stand before the poor, maligned kitty. They reach out, ready to scoop up the distressed feline and carry it to safety… and it scratches them. I mean, ok, it is called Scratchy, maybe we should have seen that coming. But come on! Honestly, being a hero of Azeroth can be a thankless job sometimes. 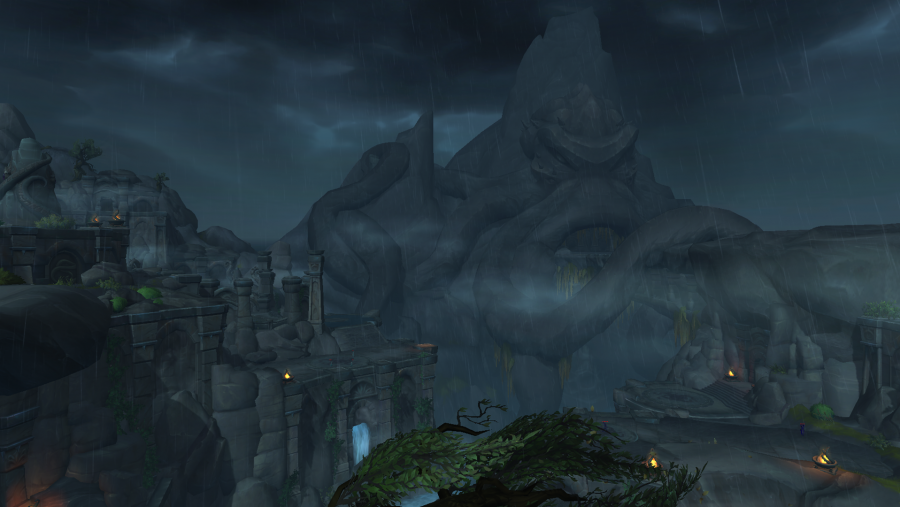 Such levity is hard to find in Stormsong Valley, however. It’s a storm-swept land that harbours an evil cult devoted to the Mind Flayers – twisted abominations who worship the old gods. The area takes obvious inspiration from Lovecraftian tales, particularly Shadow Over Innsmouth, with its fish people and gradual corruption of the landscape.

The whole zone is neatly encapsulated by the Shrine of the Storm, an island in the corner of the area. It’s pretty easy to spot: it’s the island with the gigantic octopus-faced monster carved into a mountain. Not only does this landmark say pretty much everything you need to know about the area, it also neatly demonstrates how WoW continues to look impressive, despite the constraints of its ancient engine.

It’s not polygon count that makes a game look great, it’s design and framing. You can’t get much better on those points than this huge Cthulian nightmare sculpture slowly materialising out of the fog as you journey closer to the heart of the evil infesting the zone. It’s thematically perfect and, to be frank, looks downright awesome.