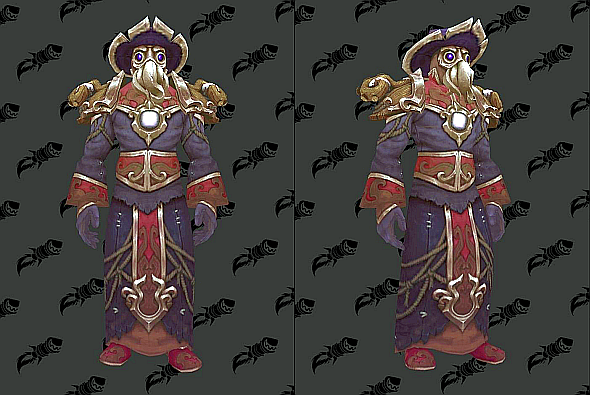 Kul’Tirans will be an Allied race in World of Warcraft’s coming Battle for Azeroth expansion, and as the datamining continues, we’ve got a look at a new armour set inspired by their native fashions.

Here’s the link to thearchived streamif you’d like to catch the entire Q&A.

Kul’Tiras is an island nation that was sundered from the mainland during the Cataclysm expansion. The Alliance will get to explore it during Battle for Azeroth, while the Horde are heading to the dinosaur-infested land of Zandalar. Hence, almost as soon as we heard Allied races would be a thing, it was speculated that Kul’Tirans would be among them.

In other news, here’s how you’ll be able to add a hint of Kul’Tiran couture to your character. WoWhead have datamined this new Cloth Dungeon set, which is perfect if any of you are planning a Lovecraft-themed dinner party on a boat.We’ve brightened the image a little, but you can see the original, plus three other colour variants,over here.

There is also a very fetching pirate hat, for all your cosplaying needs.

Battle for Azeroth is certainly looking colourful, though I’m not sure even flying jellyfish and rideable bees tops a mount made of dead kids.

All images: credit to WoWhead.