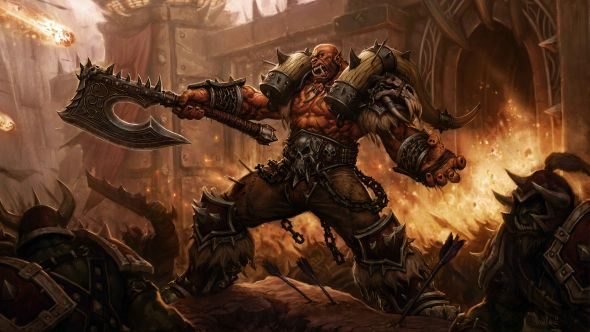 While World of Warcraft’s actual world is in upheaval ahead of the Legion expansion, with demon invasions, er, invading over the next couple of days and a whole new class making its way out into the grand adventure, it’s not the only big set of changes. Every expansion brings a huge number of smaller improvements with it and in Legion the game camera had a re-work. This removed client-side configuration commands, not available in the option menu, to increase the max zoom distance. Now everyone is stuck at the same, normal level. This sent the community into a flurry of angry posting the likes of which are reserved by most for criminal injustice or an oncoming apocalypse.

And, it turns out, they had a fairly serious point.

For talk of actual games, here’s the best MMOs.

Brought up on the official forums by user Handsomejoe, his complaint was not the first on the topic but was when things really started to build momentum. Initial replies detail problems with seeing raid bosses and tales of motion sickness, including one person saying a guildmate threw up due to not being used to it.

These complaints then continued for ten straight, reply-capped threads. The latest one, where much of this information is sourced from, is over here. Blizzard’s main reply, from lead designer Ion Hazzikostas, was from before the major disagreements began and focused on the competitive advantage provided – both in PvP and PvE – as well as how having a massive maximum camera distance ruined look ‘n’ feel. The annoyed group didn’t take those answers, pointing out their health concerns should trump problems; that everyone could be made equal by adding the console-command-only increased maximum zoom distance to the default interface menu; and not accepting a limiting to the way they play just so the art can be seen a bit closer.

Those not familiar with the game or its camera options should take a look at this image for an idea of how drastic the change is. Do keep in mind that the vast majority of players – myself and everyone I know who plays, for example – have always used the UI max, not the console one. I didn’t even realise it was a hidden option until these complaints popped up, though I also haven’t done high-end raiding in a very, very long time. This is one of several areas where it proves necessary, simply to be able to tell what a boss is doing, as described in this image album.

However, it’s the health issue that really strikes home. While problems of perspective could be designed around in future, reducing the size of the odd dragon here, making that demon overlord’s fire plume death maneuver a little more visible there, you can’t stop people getting sick. This thread, which popped up on July 20, explained that it wasn’t just max zoom causing problems, but other camera changes as well.

This lead to an investigation by Blizzard, as explained by bluepostsin that thread. Features such as the dynamic ActionCam, which was unfinished but left to be enabled by mods as many players enjoyed it, seemed to be getting turned on by accident. Mounts had bugged out to make flying more sickly. The camera used when players were in vehicles also had its own new set of bugs, leading to this hilarious-if-horrifying video, which comes with a serious trigger warning if you suffer from motion sickness:

Not fun. Blizzard focused fixing on these sorts of problems first, and they should now be okay. Then they turned their attention back to camera zoom.

Ion Hazzikostas popped up once again on the official forums, in reply to that latest camera zoom megathread, to say where things lie. He explains that he thinks his initial post focused too heavily on the competitive advantage element, and that part of why they changed things was in-line with other improvements – like the addition of much-celebrated new combat animations – to make the game that much nicer to look at. He also points out that they have failed in their part to make interesting encounters that don’t seem to require a higher max zoom distance, stating:

“When a tank can’t see around a boss like Archimonde to know where incoming demons are in order to corral them, that’s obviously not ideal. There is much we can do to keep WoW’s scale from spiraling out of control, as well as UI and camera improvements to the experience of fighting huge monsters, and we’ll be paying close attention to feedback along those lines as we move into Legion.”

He also says that the original plan was to put these fixes into the Legion beta early, giving lots of time for feedback. That beta has lasted longer than any of Blizzard’s others, with a lot of development over that time, and putting it in early would have allowed for a lot of feedback and, thinks Hazzikostas, fixes to prevent motion sickness despite zooming in. That didn’t happen due to a bug, which is why these problems are only coming to a head now.

They’re going to disable a follow-up mod that was allowing players to maintain long zoom distances because of a bug, but also restoring some amount of the console-only functionality. In the end, the console-enabled max has ended up half-way between what it originally was and the default. They’re doing it this way because they still want to reduce it, but don’t have time to iterate often enough to fix issues, and the number of health complaints is too high to ignore.

The immediate response was positive, but complaints continue the deeper you go past Hazzikostas’ post. There are also a lot of bosses in Legion that fall under the problem of being absolutely massive. One fight in the first major raid, Emerald Nightmare, involves three humongous dragons. Another, in one of the game’s dungeons, is against a woman coming out of the sea, a dozen times larger than your character.

Overall, it looks like it will be another expansion cycle before we see the end of this story – be it an increase in the default max, or Blizzard fixing the underlying problems, as they call them, to bring it back down. The ‘Action Cam’ will eventually return once it’s ready, and it looks like the blues intend to use it as a possible solution to the massive-boss problem, allowing for more dynamic vision. Most players might not even notice this set of back and forth changes, but for a few it’s been a dodgy month for their enjoyment of the game.