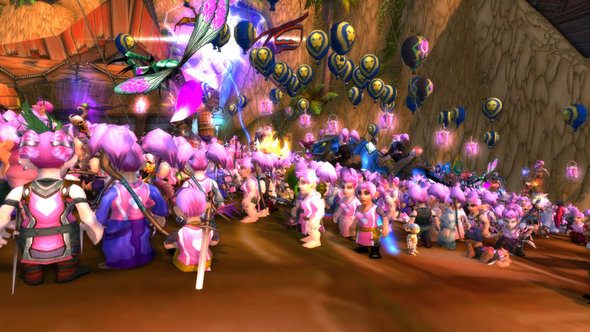 Every October for the last six years, World of Warcraft players have been creating pink-haired, level one gnomes and running them across Azeroth in a show of solidarity to anyone suffering from breast cancer. Last year, nearly 3000 players showed up for the running of the gnomes, raising $6,639 for breast cancer research and vaccine testing.

For some alternate MMOs, check out our list of the best of the rest.

Blizzard, being the all-round good guys that they are (as is evidenced by their recent showering of love on a fan) will be accommodating the race with an official makeover to the environment. The alterations will include a proper starting line, as well as cheering crowds lining the path so that players can keep up their morale on the lengthy marathon. There will also be a quest for the run, starting in New Tinkertown in the north and taking players through a series of gates along the route, finishing in Booty Bay on the southern tip of the Eastern Kingdoms.

The new additions are currently available of the public test realm and should be hitting the official servers in October, in time for breast cancer awareness month. If you don’t already have WoW, you can try it for free right now.