The heaven, they named World of Warplanes, which was like World of Tanks, but with metal buzzards. But it wasn’t quite as good as World of Tanks, and it didn’t leave beta for like a bazillion years and suddenly everyone’s making tank games and good grief, Wargaming got rich enough to hire a troop of skydivers to create their logo in the sky, because fuck it, when you’ve got this much money what else is left?

And then they created the seas, and on them, they floated ten storey steel ducks, and let them shoot at eachother.

And at GamesCom, I saw that it was also, very good.

Because boats are cool. Boats mirror what made World of Tanks good, and World of Warplanes less good: they are slow and hulking, with surprising tactical depth (GEDDIT, HA HA) and they don’t require to reactions of a ferret to direct or shoot. 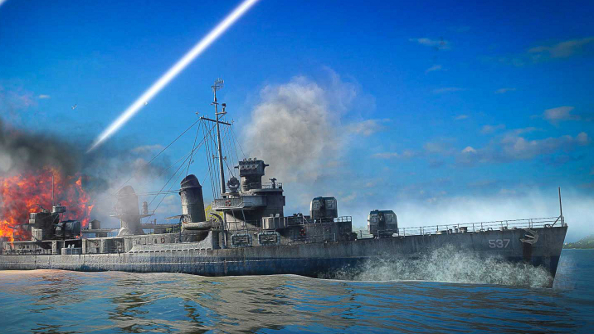 In Warships, you can control the biggest and smallest ships of the Japanese navy in, relatively large – 32 players or thereabouts, battles across the ocean. Winning requires planning, communication, and judgement – along with a good aim and no small amount of spatial awareness.

The ships control in two ways: you can direct them using the WASD keys where the A and D control the forward and backward movement, and the W and D directions. Or, you can zoom out to a tactical map and plan a route, like a proper captain. With your course plotted, you then aim your cannons – except they’re slow, suffer from perceptible lag, and in most cases, don’t completely cover the full extent of your craft. And lastly, you fire: but shells take a good while to hit from anything other than point black range.

It works. The controls are simple and welcoming, but allow for interesting tactics. This isn’t a sim, and it isn’t an arcade game. It’s something in-between – a pastiche, I guess, but a loving one. It’s probably the most fun I’ve ever had playing with boats in a videogame – certainly more fun than Total War’s pondering naval engagements, definitely more approachable than sims like Silent Hunter, far-far deeper than the Pirates games.

You can sense just how carefully designed this game is in what Wargaming allow you to control, or, more accurately, what they don’t. Players direct torpedoes manually – and they’re given a zone of probability as to where they will strike. Playing as a torpedo boat is just as fun as playing as a big destroyer or even aircraft carrier: you’re effectively playing as a shark, trying to use the cover of small islands to get into position before loosing off a barrage and slinking away. 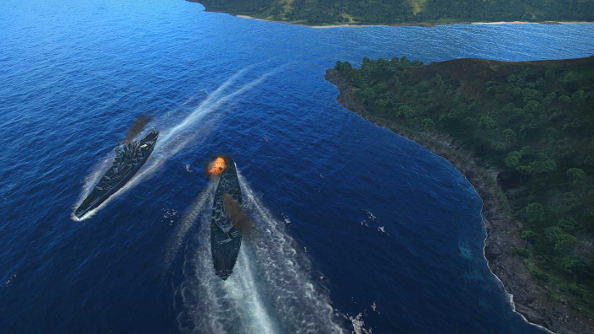 But then, playing as an aircraft carrier, or other boat with aerial escort, you have no real control over your friendly aircraft – save ordering them to target certain craft – they’ll do damage and protect you, but that’s all left to AI.

It’s fine, because I soon discovered the most dangerous foe in World of Warships is rarely the other players. Instead, it’s tunnel vision: becoming so attached to lobbing shells at your enemies that you don’t notice the tiny islets dotted about the playfield.

Which leads to a truly embarrassing death. Bouncing off a little peninsula, hitting full reverse, and desperately trying to play it cool as shell after shell lands on my deck. Game over.

I turn to the developer leading the demonstration.

“Can I have another go?”