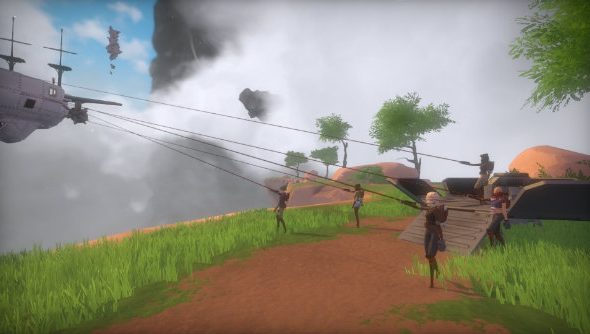 Worlds Adrift looks more lovely every time I see it. An MMO set in a Skies of Arcadia-inspired world among the clouds, Worlds Adrift will have you building an airship and sailing through the skies, stopping of at its infinite isles to hunt for supplies. This new trailer gives us a glimpse at some of the visual variety we can expect from this endless expanse.

We don’t know when Worlds Adrift will be out, but you can play our list of PC’s best MMORPGs while you’re waiting.

While you might think of exploring this physics-based sandbox in practical terms – the hunt for ship parts, gear, etc – there’s also a story to uncover as you search. Perhaps you’ll stumble upon the remnants of civilisation from before the event that saw the world shattered and splintered into the clouds.

The islands in the new trailer look impressive, with huge stone statues, deep caverns and green pastures all on show, but, remarkably, they weren’t even created by Bossa Studios. These islands were built by the community, using the game’s Island Creator tool. Have a watch below:

Many of these community-made islands will even make it into the final game, with the tool available to download for free on Steam now.

Even if you don’t fancy building anything, you can use the tool to vote on the best islands, and you can even get a taste of the final game by exploring and swinging your way around any of the creations.