This is a sponsored post courtesy of Bossa Studios.

So you want to build an airship and explore floating worlds – travelling to places where you can gather resources and encounter other players in a completely freeform environment? Maybe you’d even like to be a pirate of the skies – we’re not here to judge (you scoundrel).

You can buy Worlds Adrift on Steam.

Worlds Adrift will let you do all that and more. But as with any MMO which features such a powerful toolset it can be a little daunting at first to get to grips with. With that in mind, here’s a quick guide to taking your first steps in Worlds Adrift, from creating a character to building a ship, and beyond.

Does it matter what kind of avatar I make? 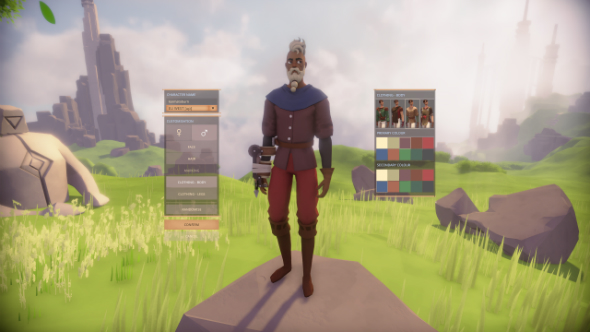 Only in the sartorial sense: you wouldn’t want to be caught looking anything other than fabulous when you encounter other players. But player appearance is purely aesthetic – your choices won’t limit you in any way, or determine how you’ll have to play the game. So go nuts and build an avatar that speaks to your own sense of style.

What should I do first?

Immediately after creating your avatar you’ll find yourself inside a mystical-looking tower, from which there’s no obvious way out. Don’t sweat it, though: you have a grappling hook (right mouse button) to winch yourself around as you navigate environments. Hook it to a surface and press Shift to reel yourself in, or Control to let out some slack. Take some time in this first room to get to grips with the grappling hook, as it’s an invaluable tool, and one that rewards a little experience with a lot of traversal options.

Your other objective in this room should be to use your Forge Scanner. This is a handy tool that lets you collect knowledge from objects around the game world, and by default it’s bound to slot 4 on your quick bar. Hit 4, then use the left mouse button to send the scanner out on an object. Why not try that enticing glowing mural in the first chamber? 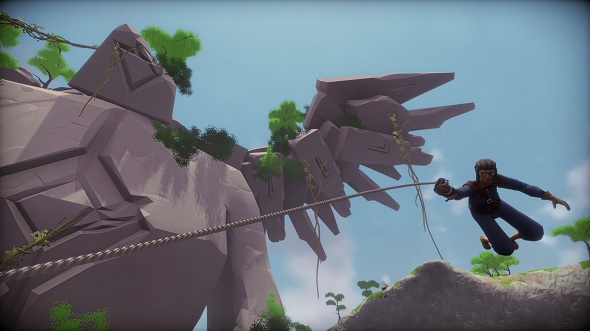 The first few minutes of the game are really about learning traversal, so get acquainted with the weight and behaviour of your grappling hook by firing it out onto the tower’s exterior and lowering yourself down using Control.

If you press the right mouse button (RMB) again to disengage the hook from here, you’ll take fall damage. But by getting some momentum up by swinging back and forth, you can get near a cliff face and swap your hook location to it with two clicks of the RMB. Note that if you swing into the cliff with too much force, you’ll take damage from that, too.

There’s a real art to using your grappling hook, and it’s better to learn that art here in the safety of your spawn island than mid-fight with hostile players trying to board your ship. But we’ll get to all that.

Well, you get to builda ship. Acquiring enough knowledge and gathering the required resources are prerequisites for that, though, so let’s break down how those resources work.

Knowledge is gathered using the Forge Scanner we mentioned earlier. Almost every object in the game world contains a bit of knowledge for you to extract, so go weapons free with it: aim at trees, rocks, absolutely everything. Once you’ve collected 50 knowledge points, you’ll be able to unlock shipbuilding in your knowledge tree. Press Tab to bring up your inventory and navigate to the relevant section to see a broader picture of your knowledge tree, and click ‘shipbuilding’ at the centre to unlock it. 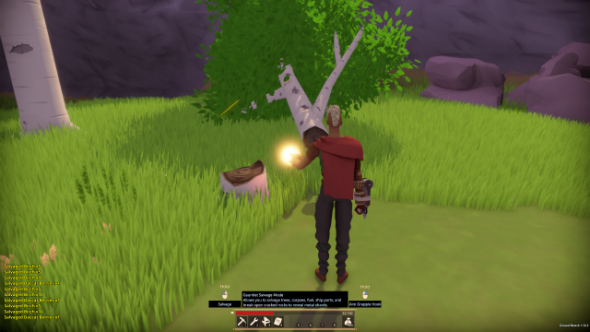 The other resources you need to worry about for now are metal and wood. Using slot 1 from your quickbar will equip salvage mode on your Gauntlet, so aim it at trees to chop them down and harvest that juicy wood. Although two trees might look alike, the wood from them might be different, and this is important to note because when you’re building components you can’t mix and match wood types. Decks, for example, require 200 of any one wood type. 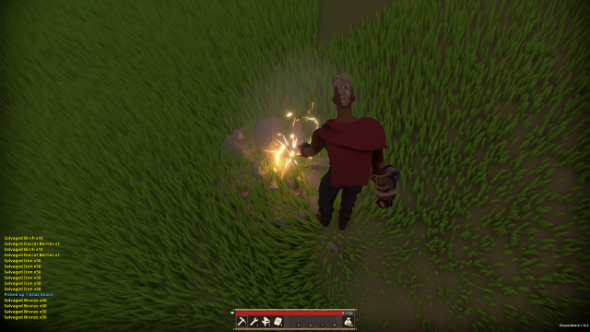 Finding metals is a bit trickier because they’re found within rocks, and rocks don’t pop out on the horizon like trees. And in the name of clarity, it’s not all rocks we’re talking about, but a specific type of lighter stone, smaller than the dark formations you’ll see more commonly in the world. Here’s an example: 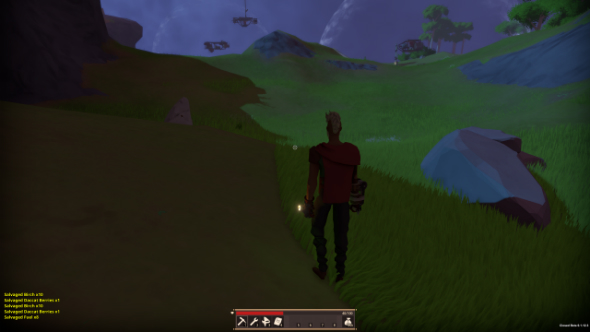 On the left is a rock that can be mined and contains metal. On the right is a rock that’s of no use. You can find these smaller, paler rocks on the sides of cliff faces, if you’re feeling sufficiently brave and competent with your grappling hook. You can use Q to climb rather than use the hook. Like wood, metals come in many different varieties, so ensure you have a high amount of at least one type so that you’ll have an easier time crafting later.

Are those the only resources I need? 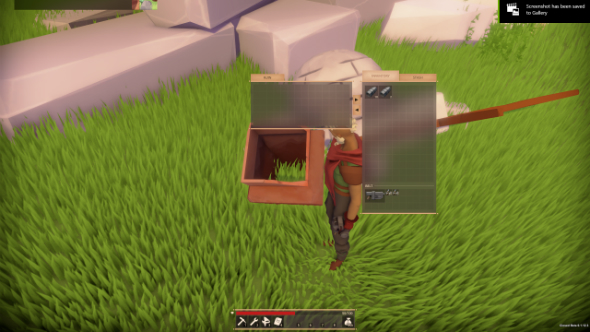 Well, no – trees also contain daccat berries that replenish health, and they’re certainly handy to have in your inventory. Make sure you equip them in your toolbar so that they’re easily to hand. Additionally, Atlas Shards are contained within rocks, and you need these to build several components later on, too. And then there’s fuel, which you’ll find in rusted metal canisters. Later on in the game when you build a ship with an engine rather than a sail, you’ll need fuel to get anywhere. For now, though, just concern yourself with wood and metal, picking up other resources as you find them.

Ok, I’ve gathered a bunch of wood and metal. Now what? 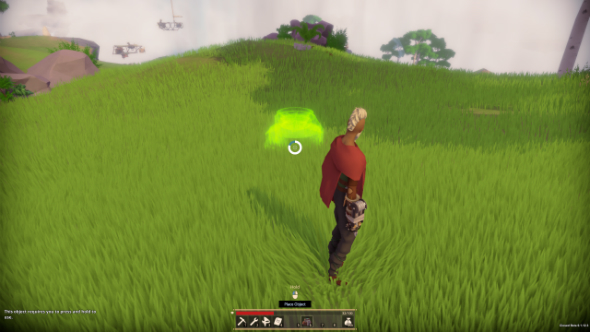 Well done, intrepid forager. You’ve procured the materials necessary to build a Shipyard and Assembly Station. Enter the crafting menu using Tab and drag across the materials you’d like to build them with. They’ll be placed in your inventory when they’re done, ready for you to equip and place in the game world. The Shipyard is where the frame of your vessel is created. Press E at it to see your choice of ship sizes, each with different resource requirements. When you have enough resources, simply drag them over onto the schematic and construction will begin. 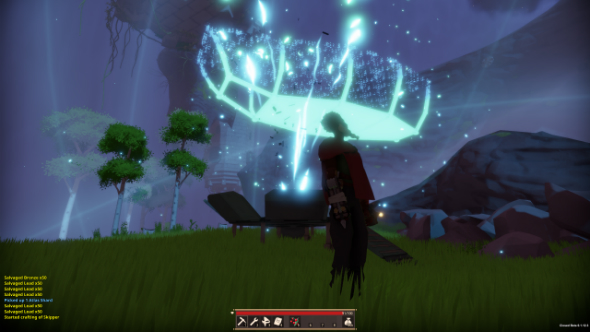 Assembly Stations are where you build the component parts that turn your ship frame into a controllable vessel. A word of warning about these: completed parts will fall to the ground, and willhurt you if you’re underneath them. Best to keep a safe distance while construction is underway. The Atlas Core is particularly heavy… 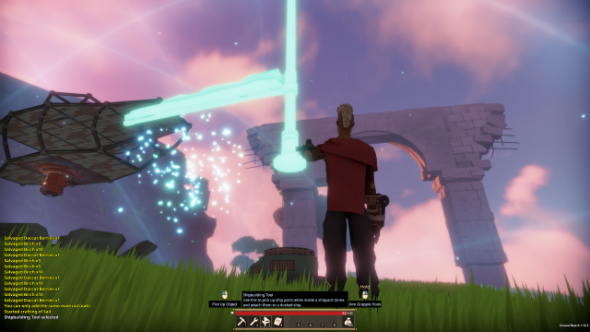 To get a basic ship up and running you’ll need to construct a helm, an Atlas Core, and a sail. These don’t enter your inventory when completed but rather exist as solid objects in the game world, so to manipulate them into place you’ll need to hit 3 on your quickbar and equip the shipbuilding tool. This allows you to pick up and place components on your ship. This is where that grappling hook experience comes in handy, as manoeuvring heavy ship parts up to a floating frame takes a little coordination. You’ll also need to create a personal reviver and register it by highlighting the device and holding down E – if you forget to do this, you won’t registered to your ship and so won’t respawn on it, which would be rather inconvenient.

Can I go flying now? 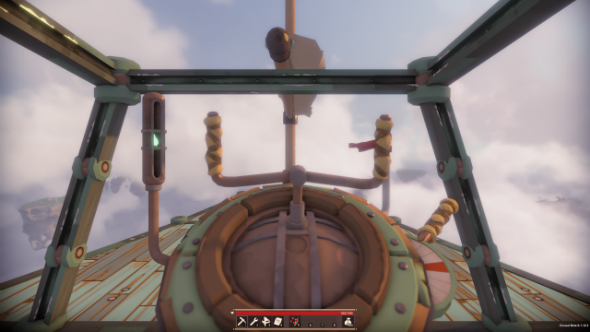 Yes. Yes you can. Just take control of the helm, grab a bit of wind, and off you go. Be aware that other players are free to interact with you however they wish, though – if they want to steal your ship and kill you, that’s their prerogative.

Reputation is persistent in Worlds Adrift – names can’t be changed, and players have long memories. It’s certainly not unheard of for communities to keep track of pirates on forums and unite against them. So if you’re planning to take an aggressive approach to other players, just know that there’ll probably be consequences, sooner or later. 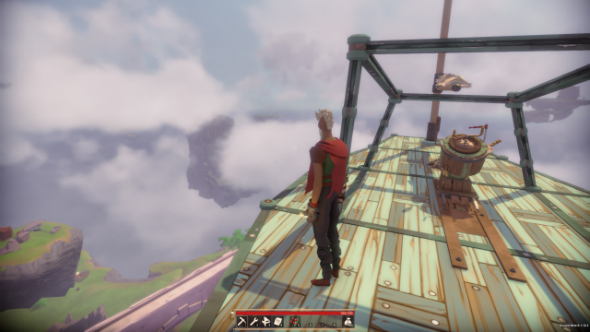 I know. Floating around in the clouds and exploring floating fragments of Earth is quite something, isn’t it?