My journey in Worlds Adrift begins in a floating chamber of some ancient design from which I  promptly clamber up to a ledge to survey my surroundings. This is the start of my adventure to become the baddest sky pirate in the great blue yonder. I want to savour the moment as I stare out at the alien landscape and the floating enclaves. I allow myself a few seconds before taking out my grappling hook and making the descent to the ground below. I’ll soon come to learn that the grappling hook is my most useful tool, enabling me to access everything from cliff ledges to my ship’s deck.

Perhaps Worlds Adrift will make our list of the 15 best sandbox games on PC. 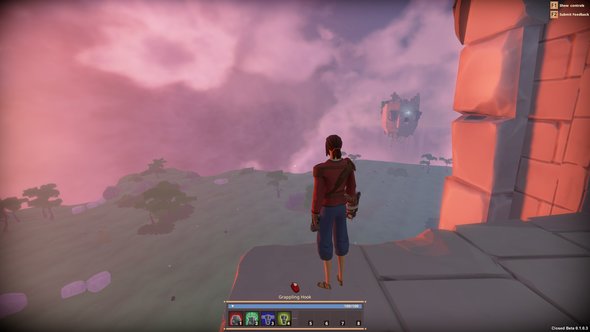 The first order of business is to scavenge for supplies. Worlds Adrift has no real end-game goal, it’s really all about the experience and the journey. There’s a lot of simple satisfaction to be found in building ships, exploring the world, gathering knowledge, and generally seeing the sights. Developers Bossa Studios recently transitioned it into closed beta after an extensive alpha testing phase and now anyone is able to grab an Early Access copy and sail the skies.

My adventure begins as I decide to aim towards building the best ship possible and sail to every corner of this humongous map. I’m far from having that kind of power right now, but I can at least throw a few sticks together to build a basic raft. To help with the process I give everything I see a quick pass with my scanner. Not only does this let me know what I’ve actually found, it also gives me precious knowledge points – I can use these to unlock blueprints for new ship designs, engines, and various other pieces of academia that a budding buccaneer might need.

The scanner helps me find a stylish piece of headgear in an old oak chest, which I immediately try on. History’s greatest privateers all wore hats and bandanas, so who am I to deny tradition? I also spot these cool glowing mushrooms and decide to snap a quick selfie before heading back to my shipyard with the wood and metal I’ve gathered. 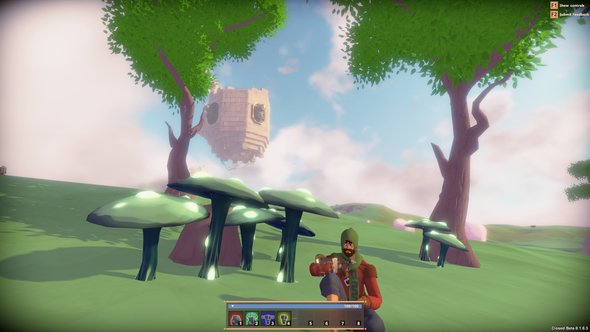 Earlier on, I found a small, metallic, flower-shaped object which serves as a shipyard, and allows me to create, customise, and dock my ship. It was abandoned so I claimed it for myself. I’m sure the player who previously owned it would have wanted me to make good use of it. That’s what I tell myself, at least.

Activating the shipyard, I select some blueprints and create my ship’s frame from the timber gathered earlier. Then I strap on a sail and build an Atlas Reactor – this is a device that keeps the ship floating with seemingly no fuel or thrust. After building a cool helm – with lots of knobs and dials, obviously – I decide to take a quick snap of my new vehicle. She might not look like much, but she’s mine, and I’ll treat her right. 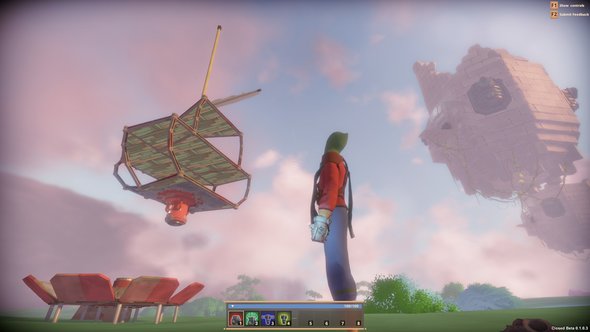 Pleased with my ramshackle boat I hop aboard and head for the skies. I find the controls to be quite responsive and my ship bobbles along with a pleasing rhythm. The helm I crafted earlier has both a thrust control and an ascent/descent mechanism. There’s also a steampunk-y centre stick which can be twisted around for smooth turning. All of this adds up to a very intuitive flying experience, which will prove especially welcoming to new pirates like myself.

It isn’t long before I come across an island floating in the distance which appears to be inhabited. I can see shipyards with vessels floating above them, as well as flora, fauna, and what appear to be animals – their alien behaviour and strange physiology is unlike anything I’ve seen before. One of the coolest things about Worlds Adrift is its mix of procedural generation and bespoke content. It even comes packaged with an island creation tool, meaning that this secluded little ecosystem may well be the work of another player, or simply the fortunate result of some random number generation. Either way, I decide to set sail for this new haven and see if I can make some friends. Perhaps we could join up to explore the skies as comrades! I’ll have to wait to find out as the journey to get there is slow, enough so that I begin to wonder if I should have added another sail to my vessel. Either way, it’s too late now. I forge onward. 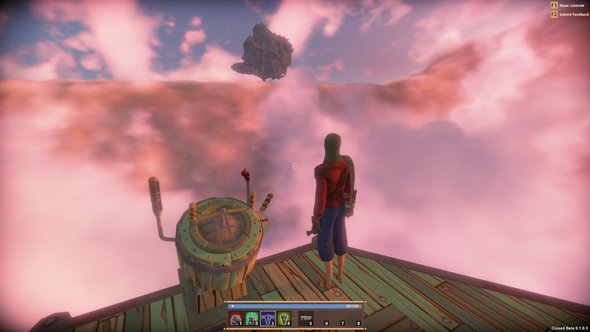 The island is indeed inhabited. Players hop about, attaching pieces to ships which dwarf my own in both size and quality, while others scale mountains and chop down trees. Everyone is happily having their own adventure. Eager to join in, I quickly find another abandoned shipyard and dock gently before jumping off to have a look around. I soon meet a fellow adventurer who happens to be docked right next to me.

My new neighbour explains via the chat system that there are flying, carnivorous Manta Rays around the island, and warns me that I should be wary of them. Since I don’t want to encounter these creatures, especially while travelling across the sky, I decide my ship needs an upgrade. I craft some wooden panels and a second sail, hoping that the extra speed and tougher hull will ensure an easy escape from anything that might try to gobble me up. 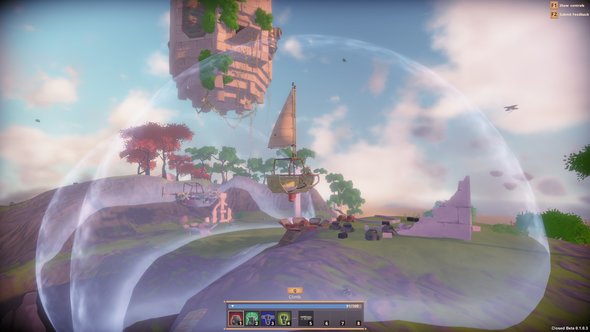 After searching around and discovering some weird bug-like creatures, along with the ruins of an ancient race, I decide this island has given me all it can and set off for the skies once more. It isn’t long before I encounter those manta rays I was warned about – thank goodness I took the time to sure up my ship. Fortunately, they decide to leave me alone. I suppose I got lucky this time. 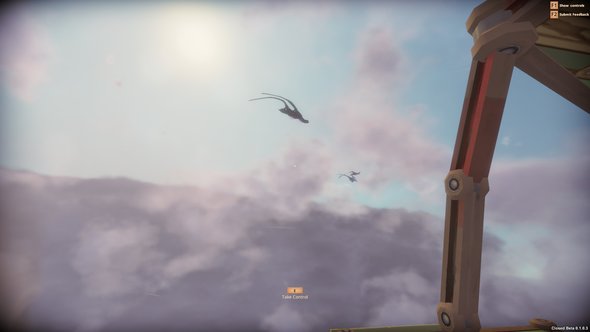 After my heart rate returns to normal, I pick a new direction and fly in a straight line, figuring I have to hit land eventually, right? But it wasn’t to be. Instead, I come upon a kind of storm wall, where swirling clouds cascade down beyond my vision. I know that there are many islands beyond it, filled with more seasoned pilots than me. But I’ve neither the vessel nor the experience to take it on, at least not until I scan up some more knowledge points and beef up my ship, so I decide to turn port side and follow the storm along its edge. Perhaps there will be something for me to see along this new path. 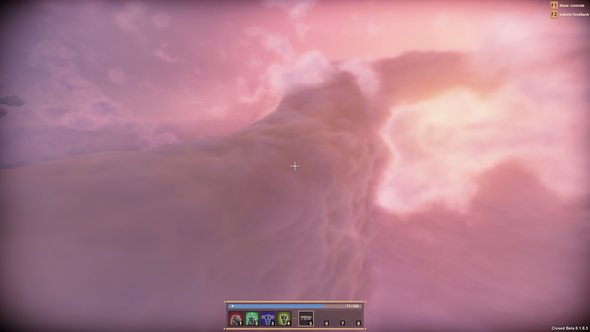 The weather worsens and the game informs me that my old shipyard has been destroyed by the ensuing storm. There’s no turning back now so onwards I go. After following the storm wall for a while I spot a tiny sanctuary amidst the choking fog and rolling thunder – as the old saying goes, any port will do in a storm. I set my course for the island which is to be my saviour and slam my thruster forwards, hoping it’ll give me enough juice to get there soon. 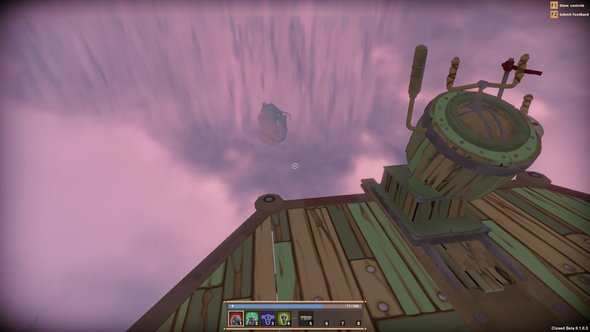 All of the commotion must have caused me to completely lose any sense of direction as I soon realise I’m right above the island I started out on. I take a quick shot of the place from above and muse over how far I’ve come in my short career as a sky pirate. Perhaps I’ll return there someday, but for now, I have a tiny island to explore.

Still, the idea of getting the grappling hook out again and dangling over the side as I pass seems too good to ignore. Maybe I’ll get some better pictures of my old home. 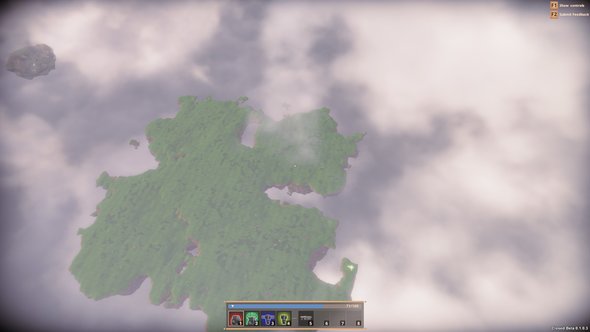 That turned out to be a mistake – caught up in all the excitement, I totally forgot that the grappling hook has a length limit. In a moment of fear and confusion, I uncouple from my ship and, as it floats on without me, I plummet through the sky. I should have been fearing imminent death, but instead, I take to contemplating the cyclical nature of the fact that the very island which bore me is now what will probably kill me. But I’m spared this fate. I simply plunge deeper and deeper into the unknown, eventually hitting an area void of any breathable atmosphere… I perish soon after. 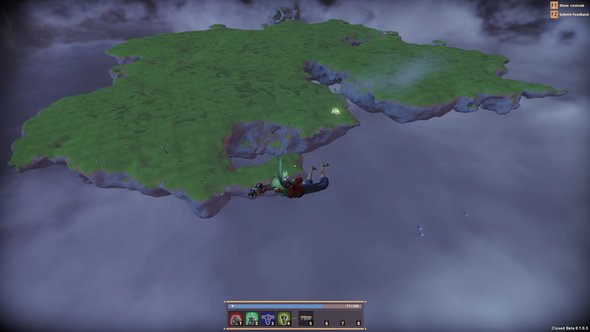 Thus ends the story of the most gravity-stricken sky pirate to ever set sail for the azure unknown. Godspeed, wherever you may be.

Worlds Adrift is currently in closed beta. To get access, you’ll want to buy a Founder’s Pack on its website once they’re available again. Developers Bossa Studios are aiming to get the public version of the game out later this year.