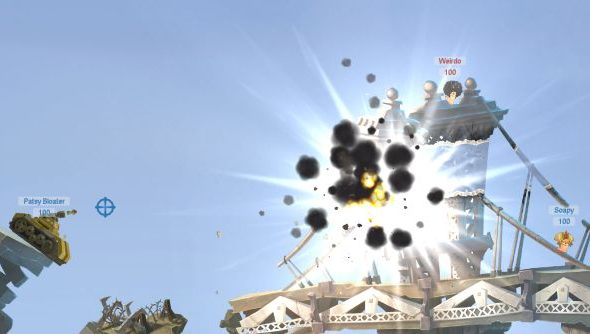 At this point I am fairly confident I’ll be playing a new Worms game on my deathbed, complaining about that unlucky Holy Hand Grenade bounce and how overpowered all these new-fangled hyper-tech additions are. It’s a franchise that has stuck with me my entire gaming life, is now 20 years and 24 games old and has managed to survive not only a foolish transition into a third dimension but the surgical extraction of it too.

Worms: WMD is the latest in that long line. Revealed via an article on Gamereactor, it’s Worms Armageddon turned up to 11 and with a few new toys thrown in. Most notably, maps now have buildings, the internal areas of which are only revealed once you’re inside. This has pretty major implications for the online mode, adding an element of stealth that wasn’t present before.

Meanwhile on the weapon front, drivable jumping tanks have been added. They provide a nice firepower boost but also paint a giant rolling metal target on your back. At least they give some more protection along with all that extra attention. Turrets are similarly powerful, only stationary.

The new generation also brings a significant graphical upgrade which in turn means different looking little pink fellas. It’s part of a whole new engine that, for the first time, is changing how the landscape in Worms is generated. Instead of a purely random map, the game will now cobble together lots of different preset areas into something that looks more cohesive but can still be massively different from match to match.

Here’s a lengthy interview with creative manager Kevin Carthew, and you can read our very own preview at 8am tomorrow.